After Outrage, Karnataka Decides To Restart Train Services To Send Back Migrant Workers

The Karnataka government had withdrawn its request for special trains apparently due to concerns over shortage of labour. 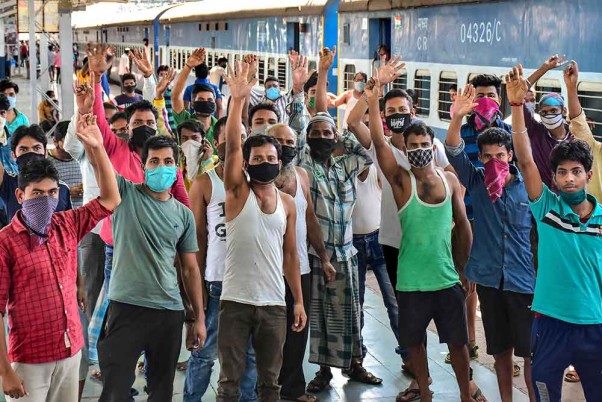 Migrant workers travelling along with their families at a railway station.
Representational Image By PTI
Outlook Web Bureau May 07, 2020 00:00 IST After Outrage, Karnataka Decides To Restart Train Services To Send Back Migrant Workers

After drawing a flak over stopping trains for stranded migrants, the Karnataka government on Thursday said it will allow the trains to ferry the stranded workers to their home states.

The Karnataka government had on Wednesday withdrawn its request to the railways to run special trains to ferry migrant labourers to their home states.

The Karnataka government had withdrawn its request for such special trains apparently due to concerns over shortage of labour.

The Karnataka government has written to 9 different states seeking their consent to operate trains from May 8-15 for facilitating the movement of stranded people.

The letter of request was sent by the Principal Secretary to the governments, Revenue Department, and Nodal Officers -- for the transportation of stranded labourers, tourists, students, pilgrims, and other persons.

So far, the state of Madhya Pradesh and Bihar have responded. However, a reply from the other states is still awaited.

In separate letters, state Principal Revenue Secretary N Manjunatha Prasad, who is also the Nodal Officer for Migrant labourers movement, asked his counterparts to give in principle approval for movement of special trains everyday, starting from Friday.

The opposition had lambasted the BJP government in the state, accusing it of treating migrant workers worse than "bonded labourers", even as Chief Minister B S Yediyurappa appealed to more than one lakh workers who wished to go back to their native states to stay back as construction and industrial activities have begun.

Yediyurappa also announced a Rs 1,610 crore relief package for the benefit of those in distress due to the COVID-19-induced lockdown which included a compensation of Rs 5,000 each for registered workers.