The desertion by the four MPs came barely a month after the TDP was trounced in the assembly elections by the YSR Congress headed by Jagan Mohan Reddy. 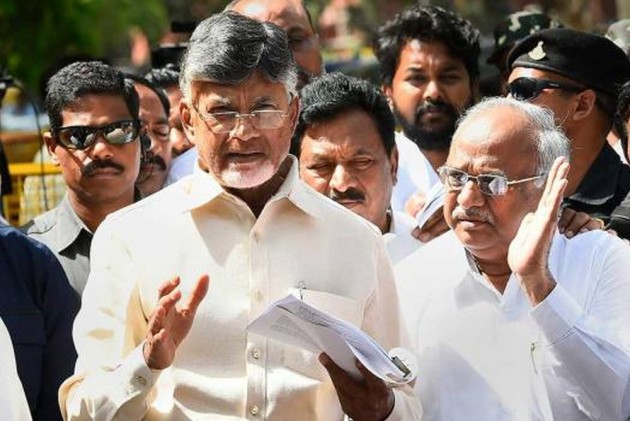 As four of his party Rajya Sabha MPs joined the BJP, Telugu Desam Party President N Chandrababu Naidu Thursday said such crisis was not new to the party even as the state unit of the saffron party claimed more leaders would flock to it.

On Thursday, taking stock of the situation, Naidu, vacationing in Europe with his family, spoke to a couple of senior TDP leaders in Amaravati over the phone, party sources said. Naidu enquired about the rebellion and told the leaders that such crises were not new to TDP, they said.

TDP fought with the BJP only for securing the state's interests, the sources quoted him as having said. The desertion by the four MPs came barely a month after the TDP was trounced in the assembly elections by the YSR Congress headed by Jagan Mohan Reddy.

Since then speculations had been rife that the party was headed for a split mainly because the rank and file was no more ready to accept Naidu's son Lokesh as the leader. Lokesh himself had lost his maiden electoral contest, inviting wide criticism from within the party.

Chief Minister Y S Jaganmohan Reddy had announced in the state assembly recently that some of the TDP MLAs were "in touch" with him in a bid to jump ship.

Incidentally, TDP Lok Sabha member from Vijayawada, Kesineni Srinivas (Nani) is said to be seriously unhappy with the TDP leadership. He has been making snide remarks against the party leadership on social media.

Earlier Thursday, in a jolt to the TDP, four of its six Rajya Sabha members submitted a petition to the Upper House Chairman M Venkaiah Naidu seeking merger with the BJP and later joined the saffron party in New Delhi.

Responding to the rumblings in TDP, the BJP state unit said TDP might become "an empty house" by the time Naidu returned from his foreign sojourn.

"The political face of AP will change by the time Naidu returns. Many TDP leaders, including former ministers and legislators, are ready to switch over and join the BJP," state vice-president S Vishnuvardhan Reddy claimed.

In a related development, over a dozen senior TDP leaders, including former legislators, reportedly held a 'secret' meeting in Kakinada apparently to discuss their future course of action.