A Day Ahead Of DDC Polls, Mehbooba Mufti Put Under House Arrest

Mehbooba Mufti said that for the last two days, she has not been allowed to console the family of Parra, who was arrested on 'baseless charges' 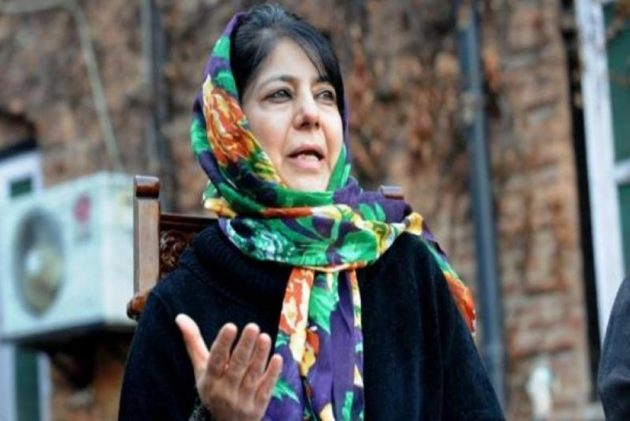 PDP president Mehbooba Mufti on Friday claimed that she and her daughter, Iltija Mufti, were put under house arrest and not allowed to visit the Pulwama residence of party leader Waheed Parra, who was arrested by the NIA earlier this week.

Though police, through its unverified Twitter account said Mufti was not under house arrest and was only asked to postpone her visit to Pulwama purely due to security reasons, the PDP leader's daughter Iltija put out a video saying she was not being allowed to leave the premises by the police officials present there, a PTI report said.

“I've been illegally detained yet again. Since two days, J&K admin has refused to allow me to visit @parawahid’s family in Pulwama. BJP Ministers and their puppets are allowed to move around in every corner of Kashmir but security is a problem only in my case,” Mehbooba tweeted. Mehbooba’s daughter, Iltija Mufti said that her mother along with her have been placed under house arrest.

Ive been illegally detained yet again. Since two days, J&K admin has refused to allow me to visit @parawahid’s family in Pulwama. BJP Ministers & their puppets are allowed to move around in every corner of Kashmir but security is a problem only in my case. pic.twitter.com/U5KlWzW3FQ

On November 25, the National Investigation Agency (NIA) arrested PDP youth leader Waheed-ur-Rehman Parra. Parra was held for his alleged involvement in the case in which the deputy superintendent of police and top counter-insurgent cop Devender Singh and Hizbul Mujahideen commander Naveed Babu's were arrested while travelling in a vehicle from Srinagar to Jammu on January 19 this year. A lawyer was also arrested along with them.

Parra was arrested after the NIA questioned him for two days at its New Delhi office soon after the youth leader filed his nomination papers for the District Development Council (DDC) elections. The NIA has not specified the charges against Parra.

Mehbooba had described the arrest as part of the “Gujarat model of persecuting Muslims” adding that “the model is in full swing since August 2019 in J&K”.

Mehbooba has now warned people that the BJP might resort to violence to keep people away from voting in the upcoming DDC polls.

“They will try to vitiate the atmosphere. They will try to use grenades and bullets. But you shouldn’t fear and come out to cast your vote to safeguard your identity and make the PAGD candidates successful,” she added.

She also said that the BJP and the BJP government at the Centre assumed that the PAGD parties wouldn’t participate in the polls and they would make their candidates with “shady characters” successful through the backdoor.

On Thursday campaigning for the first phase, of the eight-phased DDC polls, of the district development council (DDC) polls and by-elections to local bodies ended in Jammu and Kashmir. The voting on Saturday will decide the fate of 1,475 candidates in this phase.