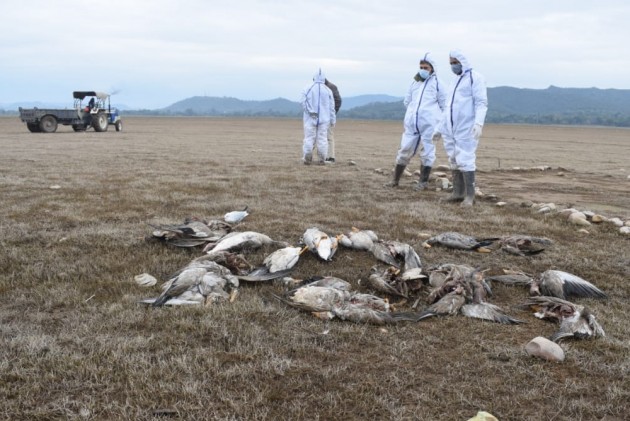 Himachal Pradesh Chief Minister Jai Ram Thakur, who flew to Kangra this morning to take stock of the situation at Pong Dam lake — an international wetland, following the outbreak of bird flu, decided to camp at Dharamshala to oversee steps taken to stem the spread of the viral infection.

The chief minister said the situation was quite under control and there was no cause of immediate panic. He admitted that some local communities have been affected due to restrictions imposed on a 10km radius of the Pong Dam but these steps are part of the action plan to contain the infection in specified areas of this district in the state.

"Right now, it's only Pong Dam wetland and its adjoining areas under surveillance and on high alert,” said the chief minister.

Also Read | Bird Flu Outbreak: Expert Advice On What To Eat And What Not

Kangra deputy commissioner Kangra Rakesh Prajapati said the first round of the discussions have already been held and the chief minister was briefed about the “management of bird flu” in four sub-divisions of Fatehpur, Dehra, Jawali and Indora.

“Since the report of the samples, drawn from native poultry birds and other local birds like crows, has not yet come from Jalandhar, we don't have an exact assessment about the H5N1 virus in the area particularly about the poultry,” he told Outlook over phone.

He said more carcasses of crows were found by the animal husbandry teams on Friday which has increased the suspicion about infection having spread among local birds.

Earlier in the day, the chief minister said the death toll of migratory birds, some of these engendered species coming to the Pong dam lake every year, has risen to 3,410. All the migratory birds which died of bird flu were being buried as per protocol, to prevent the spread of the virus.

Also Read | Explained: What Is Avian Influenza, Symptoms, How Critical Is The Latest Outbreak, And More

In the interest of protecting the health and safety of the public at large, the sale, purchase and the export of poultry, birds, and fish has been prohibited in Fatehpur, Dehra, Jawali and Indora subdivisions.

Monitoring of the Pong Dam and adjoining areas have been being ensured and quick response teams also constituted.

“About 65 teams of animal husbandry and wildlife are regularly monitoring Pong Dam and 10km of the adjoining areas. It is important to spread awareness amongst people how to deal with the virus,” he said.

The chief minister also reviewed the Covid-19 situation in the district. There are about 1,200 active cases of Covid-19 in the state out of which 300 are in Kangra district.

Thakur said though the government observed a drop in Covid-19 cases since December 15, it is important to be careful.

The arrangements for Covid-19 vaccination have been completed, he added.

Himachal Assembly Speaker Vipin Singh Parmar besides local MLAs were invited to the meeting on bird flu by the chief minister.