Sachin played an excellently calculated innings and together with Dravid did all the spade work before Yuvraj and Dhoni delivered the killing blows. 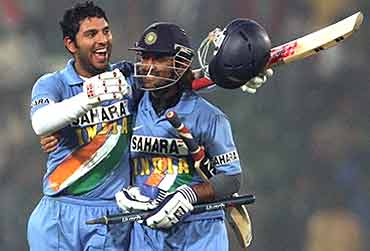 India are playing their best cricket at the moment. Sachin Tendulkar has been showing his talent and proving what a world-class batsman he is. He played an excellently calculated innings in the Lahore match and together with Rahul Dravid did all the spade work before Yuvraj Singh and Mahendra Singh Dhoni delivered the killing blows.

I think Dhoni is probably the best finisher of the game in present day cricket. I mean the way he bats and delivers those deadly blows, is incredible. Not shy of his poor footwork, he just likes to thrash the ball to all parts of the park which he does so successfully and forcefully. It appears that Dhoni has already established his superiority over the Pakistani bowlers who try to save themselves from his ruthlessness instead of trying to attack his stumps.

To me, the find of the series for India has undoubtedly been Sreesanth and irrespective of what happens in the next two days, this lad has the ability to go a long way and serve his country with merit and distinction.

He was unfortunate when three catches, including Shoaib Malik's, were floored off his bowling and he ended up with none for 74. But statistics are at times deceptive. The pace he generated and the way he caused problems for the Pakistan batsmen earlier in the innings, speaks volumes of the talent he has.

India's pace attack in the presence of Irfan Pathan, Zaheer Khan, Rudra Pratap Singh and Sreesanth is slowly getting there where the Indian establishment will sooner or later start thinking of preparing more seamer friendly pitches. India have always produced great batsmen but failed to achieve desired results because there were no bowlers who could take 20 wickets in a Test.

It is time for Inzamam-ul Haq to put a cool thinking cap on his head and reassess and re-evaluate the situation. His team is 1-2 down, he is competing against a side that has peaked at the right time and showing no mercy, his two most aggressive players -- Shahid Afridi and Shoaib Akhtar -- are out of commission, Rana Naved-ul Hasan is struggling to maintain the line and length that made him an integral component of the team until last year, and his best batsmen have not made any significant contributions until now.

So, what should he do in the fourth game to extend the series to Karachi?

The situation may be tight and tough but it is not that it cannot be handled or tackled. To overcome the crisis, it requires method, flexibility and some compromises.

Pakistan have done the right thing by recalling Mohammad Sami. He may not have been the most successful of the Pakistan bowlers recently but fact of the matter is that after Shoaib, he is the quickest and knows the pressures of international cricket. I also believe Pakistan should have added Danish Kaneria to the squad because he has this ability to take wickets.

Pakistan managed to wreck the Indian top-order in the third game but after the ball got old, Yuvraj and Dhoni made the bowlers look pedestrian and there was no Pakistan bowler who could pressurise or threaten them.

Pakistan need a bowler who can bowl in the middle of the innings and pick wickets. Arshad Khan is a committed cricketer but finger spinners generally will not get you wickets unless someone is as artistic as Muttiah Muralitharan who also went for 99 from his 10 overs against Australia in the second final at Sydney.

The absence of Afridi and Shoaib are forced ones due to injuries and therefore, Pakistan need to revise their batting order. Had I been the captain, my batting order for the Multan game would have been: Salman Butt, Shoaib Malik, Younis Khan, Inzamam, Mohammad Yousuf, Abdul Razzaq, Kamran Akmal, Rana Naved, Sami, Umar Gul and Mohammad Asif with Yasir Arafat as super sub.

Malik is in rich form in this one-day series and twice in the three games played so far, he has walked on to the pitch in the first over.

In this background, it would not be a bad decision if he is straightaway sent out to face the new ball. That might also take some pressure off an out-of-form Salman Butt. Younis has been a scourge for India in the Tests while his contributions in the one-day games are 18 not out, 81 and 16.

Considering the position at which he is batting (lower middle-order), I think Pakistan are wasting his talent and not making optimum use of his form. He has the ability to counter the early seam movement, if any, besides blocking one end and in the meantime, playing exquisite run-scoring shots.

But even after this batting order, the key is that Inzamam and Yousuf have to fire. They have struggled to put bat to ball. Their failures may be because when they walked in, Pakistan had already lost a few quick wickets and the Indian bowlers were on a roll.

The two have to realise that they are the pillars of Pakistan batting and have to come up the order to stabilise and then strengthen Pakistan's position. And to achieve that, they need to spend maximum time in the middle.

Besides, Inzamam should now understand that in the present situation, his team's strength -- bowling -- has now become his weakness. It did not require Dravid to take the assistance of rocket science and was more than delighted to chase the target in Rawalpindi while opting for the same in Lahore.

On the contrary, Inzamam decided to bat first in Rawalpindi and said in Lahore that he would have batted first had he won the toss. Without Shoaib, a half-fit Afridi, inexperienced Gul and Asif, and a struggling Rana Naved, I don't understand how Inzamam thought he would be able defend the target.

If Inzamam persists with this strategy of defending targets, I see curtains for Pakistan!