Bhuvneshwar Kumar did not seem in undue discomfort as he walked back to the changing room, with captain Virat Kohli calling on Vijay Shankar to send down the remaining deliveries in the over during India vs Pakistan group match of the ICC Cricket World Cup 2019 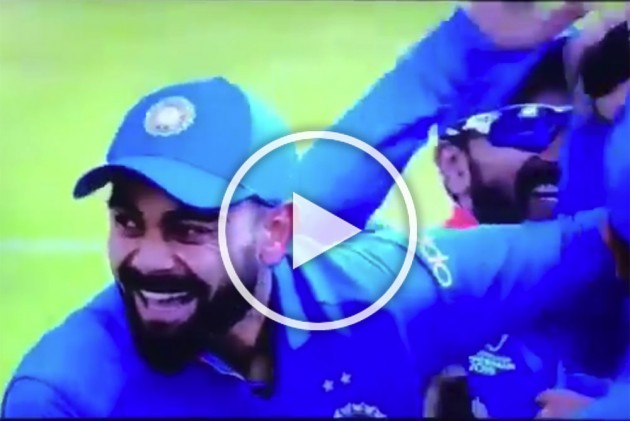 Vijay Shankar was called into emergency action by India following Bhuvneshwar Kumar's injury and claimed the wicket of Pakistan opener Imam-ul-Haq with his first ball during their ICC Cricket World Cup 2019 group match on Sunday.

Chasing 337 for victory in the crunch World Cup clash at Old Trafford in Manchester, Pakistan were 13-0 with two balls left of the fifth over when Bhuvneshwar was forced to leave the field.

The seamer did not seem in undue discomfort as he walked back to the changing room, with captain Virat Kohli calling on Shankar to send down the remaining deliveries in the over.

And Shankar – selected in the side as a replacement for the injured Shikhar Dhawan – trapped Imam lbw to give India an early breakthrough.

It was just the all-rounder's third ODI wicket in his 10th appearance, having picked up two in a match against Australia in Nagpur in March. But the moment was hijacked by Kolhi's hilarious reaction:

Kohli's reaction be like "Even this part-time bowler gets a wicket against Pakistan" Vijayshankar #INDvPAK pic.twitter.com/Wx22NCpZqp

A subsequent announcement confirmed Bhuvneshwar was experiencing tightness in his left hamstring and would not return.

Vijay Shankar picks up his very first wicket in his #CWC19 debut.

Earlier, Rohit Sharma pulverised a pedestrian Pakistan attack with a stylish hundred to lead India to a challenging 336 for five.

Despite heavy rains and overcast conditions during past few days, the pitch had very little moisture and turned out to be a batting beauty which Rohit and the other Indian batsmen exploited to the fullest.