It’s erroneous to say Carnatic music is exclusive; its roots tell the story of an organic and aesthetic growth involving people from all classes. 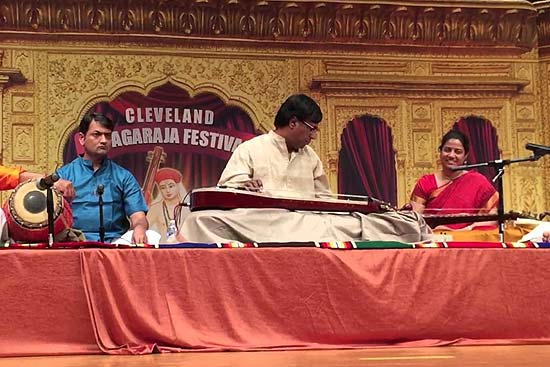 Music is sound that stirs the soul. But right now in Chennai there is a growing noise that Carnatic music and Chennai’s famous December Season is exclusive and shuts its gate to all classes and communities. This is a rather simplistic and incorrect manner of assessing the greatness of Carnatic music, its performers and the Season and manufacturing artificial dissent and schisms.

Carnatic music owes its origin and growth and patronage to people of all communities. Thinking music historians and practitioners will agree that Carnatic music’s DNA germinated as a blend of Aryan and Dravidian musical culture’s interface from over 2,000 years ago. The Tamil pann and Vedic concepts of music assimilated to form a music that is unique, rich, vibrant, soulful and a joy to connoisseurs the world over.

To the perception that most Carnatic composers -- including the Trinity of Tyagaraja, Dikshithar and Shyama Shastri -- were upper caste, I would point out that it would negate the spiritual and rich melodic contribution of Tamil saint poets, the Saiva Nayanmars and Vaishnava Azhwars (8th century BC onwards), at least some of whose compositions are rendered in concerts today.

Definitely, many more may have found active on-stage visibility had original music and tunes been available to us in the aural tradition. Let us not forget those Carnatic composers who earlier enriched the music with their compositions like Muthu Thandavar (16th Century), Marimutha Pillai (19th Century), Tanjore Quartet or Dandapani Desikar and others in the 20th Century.

It may be true that many top musicians are Brahmins today but Carnatic music in general has been richly shaped by the inspiring contributions of evocative oduvars and other temple musicians. Several legendary vocalists and instrumentalists have made no secret of the fact that they owed a lot of their inspiration to brilliant exponents of nagaswaram (wind instrument) just as many mrdangists have been mesmerized by tavil (percussion) artistes. The violin which entered the Indian music world about 200 years ago and several traditional instruments like the bamboo flute, chitravina, veena, mridangam, etc have produced renowned exponents from diverse communities.

Talking of a skewed gender politics, no one in the Carnatic world is blind to the fact that the top gurus were sterling women from the Deva Dasi community. It would be no exaggeration to state that entire generations of artistes from any community sought advanced guidance from the geniuses of that community like T Brinda, her grandmother Veena Dhanammal and other distinguished exponents like T Mukta and T Vishwanathan.

The Tamil Nadu Isai movement in the early part of the 20th century definitely made the Chennai Festival more inclusive and in recent times initiatives by the state like the Chennai Sangamam and organisations like the Muttamizh Peravai have endeavoured to make the Season even more inclusive. Any trip abroad to Australia, Canada, Singapore, Malaysia or the UK demonstrates the passion for Carnatic music from Sri Lankan as well as members of diverse Tamil communities.

As for the famous December Season being elitist, let us remember the Season, one of the largest in the world, is a human endeavor. It has wrongs that need to be corrected and things that are right that need to be supported. It affords a buzz, tourism and a cultural high that needs to be applauded. It definitely draws people from diverse communities and brings them harmoniously together in various concert halls irrespective of the community a performer belongs to.

The NRIs pouring dollars to buy some junior performing slots is not an altogether false fact but it must be remembered that concert promoters and venues have only three main sources of income - corporate sponsors (the earlier centuries had kings and aristocrats who sponsored performers); ticket collections and the donations from well-wishers (support for poor performers from rich patrons whose generosity would make them royal poets, or temple performers). The other side of this polygonal issue is - many NRI artistes are as talented as some local aspirants and donations from NRIs indirectly support many local talents too.

That said, can more be done to take the music to other communities? I have been championing this cause from the 1990s and still say a lot needs to be done. Though many dedicated organisations and individuals were doing a lot in their own ways, I felt that given the political will, the government could easily make a huge difference in one stroke.

This is precisely what happened in 2006. The Sarva Shiksha Abhyan invited me to conduct a macro-level camp for over 31,000 rural children of Tamil Nadu for which I authored a book, Inaiyatra Innishai as well as a 2-Volume DVD that included live demos by some of the biggest stars. I composed a couple of short pieces and also tuned two of Arunagiri Nathar’s Tiruppughazh in ragams like Sahana and proved that these were as accessible to students of any community, if taught at the right age.

I was soon invited to provide a syllabus from Class I-VIII for “Music Education in Schools” by the Manmohan Singh Government and I do hope that the new government will revive this syllabus and introduce both Carnatic and Hindustani in schools across the country. Children respond to the arts well, and they might be further groomed to become performers or organisers involved in the classical music industry.

Without much noise making about whom Carnatic music belongs to, let us begin by correcting any imbalances by working passionately to bring children into the artistic fold across schools both in villages and the cities. Reform is possible only by such massive outreach programmes. Let everyone be exposed and offered the choice to embrace Carnatic music.

As told to Sudha G Tilak.

The author is a seasoned musician of the chitravina, a guru and composer.

Ashwani Sharma / Including Himachal's famed tourist destinations of Kufri and Fagu, snowfall also started at Narkanda, a tourist destination 61 km from Shimla. Rohtang Pass at a height of 13,059 feet has already been blocked by the snow .