A Long Time Coming
Chief Minister Kiran Kumar Reddy who recently visited the Visakha Agency area in Visakhapatnam district announced a slew of schemes for the tribals. The thickly forested Agency area is located on the Andhra-Orissa border. Several inspections of the region were carried out before the CM's visit to ward off any Naxal attack. Kiran Kumar is the first CM to visit the area after Neelam Sanjeeva Reddy to make a trip to this region. Union minister for rural development Jairam Ramesh and union tribal affairs minister Kishore Chandra Deo were also present as the CM announced a Rs 528-crore package for laying of 962 km of roads in the Agency area. Both Jairam Ramesh and Kishore Chandra Deo said they supported a moratorium on all mining activity in the area. The CM said the state government would not violate any constitutional provisions while implementing projects. Apart from roads, Kiran Kumar announced medical camps and health programmes for the tribals. The visit, taken up with much fanfare, saw several Congress leaders and state ministers in attendance.

Agriculture Budget?
The state government's efforts to present a first-ever agriculture budget turned into a fiasco. The entire opposition rose in protest saying the move to present a separate budget was unconstitutional since the House was not informed. The Telugu Desam and Lok Satta have threatened to move a privilege motion. The government which has been trying to showcase the importance it has paid to the farm sector even got “Agriculture Budget speech 2013-14” booklets printed. There was no mention in the Assembly agenda of the agriculture minister presenting a separate budget. Finally, a red-faced finance minister Anam Ramanarayana Reddy admitted that the government had committed a mistake by not informing the Legislature. The words Agriculture Budget were then struck off and changed to Action Plan and the same was presented by agriculture minister Kanna Lakshminarayana. The minister stated that the purpose of the Action Plan was to achieve sustainable development in agriculture and allied sectors. However, the priority to Jalayagnam, YSR's ambitious irrigation plan, seems to be waning. The sum allocated to irrigation projects under Jalayagnam for 2013-14 is Rs 13,800 as against Rs 15,010 of the current fiscal.

Back to the Pavillion?
The no-confidence motion moved by TRS and YSR Congress against Kiran Kumar Reddy's government fell flat as the motion was defeated by 142-58. The Telugu Desam stayed neutral though six rebels supported the no-trust motion as did nine Congress rebels. All 17 members of the TRS and 17 MLAs of the YSR Congress were in ayes as were four CPI, one CPM and three BJP MLAs. An Independent also voted for the no-trust move. What was interesting is that the MIM (seven) MLAs were among the 29 members who abstained from voting. While the reason stated was that the MIM did not want to vote in the same group as the BJP, insiders see more to it. There is talk that after the jail treatment which both the Owaisi brothers received in the hate speech case, the MIM is jittery. Besides, talk that the Congress might field former Indian cricket captain Mhd Azharuddin in the Hyderabad Lok Sabha seat has added to their anxiety. Hence, the MIM might just be prepared to make amends with the Congress, say sources.

Borderline Case
During the debate, Kiran Kumar Reddy led a spirited defence of his government and said that he missed his "walking friend" and leader of the opposition N Chandrababu Naidu. The TDP president is on a padayatra for the last six months. Taking a pot-shot at Naidu, Kiran Kumar said the opposition leader seemed so focussed on his padayatra that he might even walk into the neighbouring state of Odisha!

A Quiet Exit
Hyderabad's Pharma Czar and founder of Dr Reddy's Laboratories Kallam Anji Reddy passed away on March 15. He was 72 and had been suffering from liver cancer. The company which was set up in 1984 with a capital of Rs 25 lakh now has a market capitalisation of Rs 30,000 crore. In fact, many who earlier worked at Dr Reddy's later went on to set up their own Pharma companies. Among the many who paid their respects to the late Anji Reddy was Satyam founder B Ramalinga Raju who is out on bail in the Satyam scam case. Raju made a quiet entry and exit and refused to speak to mediapersons.

Star Stampede
The death of an NTR Jr fan in a stampede during the audio release function of Baadshah cast a cloud on Hyderabad. Over 20,000 fans of the actor turned up at the Rama Naidu Studios in Nanakramguda to get a glimpse of their favourite star. Neither the organisers nor the police were equipped to handle the huge crowds. In the resultant stampede that followed, 23-year-old Raju, was crushed to death. Raju was a scrap dealer from Warangal district. His body was noticed by the police only when crowds thinned after the stampede. He died on the spot. Three others were also injured during the incident but their condition is stable. The audio function continued despite the tragedy. NTR Jr announced a compensation of Rs 5 lakh for Raju's family. Veteran film-maker and former union coal minister Dasari Narayan Rao lashed out at the trend of organising audio release functions saying they were conducive to such tragedies. "These functions only serve to fan the ego of stars and are hell-holes for starved fans who have no protection whatsoever,” he said. Meanwhile, police say that the permission was granted only for a gathering of 5,000 and that it was impossible to control the unexpected numbers. Earlier, the audio release function of Mirchi also witnessed similar scenes. Police had to resort to a lathicharge to quell a stampede. 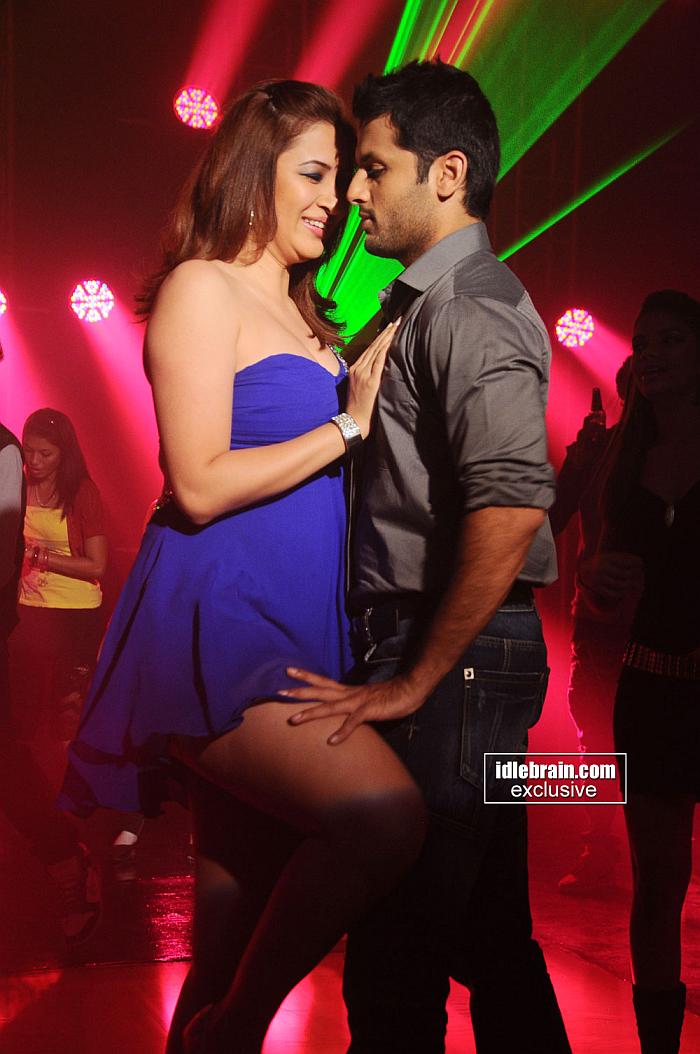 Game, Set, Match
Badminton doubles player Jwala Gutta may not be making waves on the court off-late but off it, she sure is. She has been eyeing movie stardom for some time now and will be making her debut in an item song in Telugu film Gunde Jaari Gallanthayyinde. The movie stars actors Nitin and Nithya Menon and is slated for release on April 19. Stills of the item song show a buxom Jwala in blue hitting the floor with Nitin. Her much talked about film debut is being watched carefully by top Telugu stars who have been toying with the idea of taking her on as female lead in their films. If the photos are anything to go by, then her thunder thighs certainly ought to cater to the taste of Telugu audiences. Gossip has it that Jwala agreed to do the item song because she is a close friend of Nitin's and wants to test the filmi waters with an item number.