Hyderabad has not seen as much action and political drama as it has this last week. Jagan's interrogation by the CBI and his subsequent arrest eclipsed everything else. 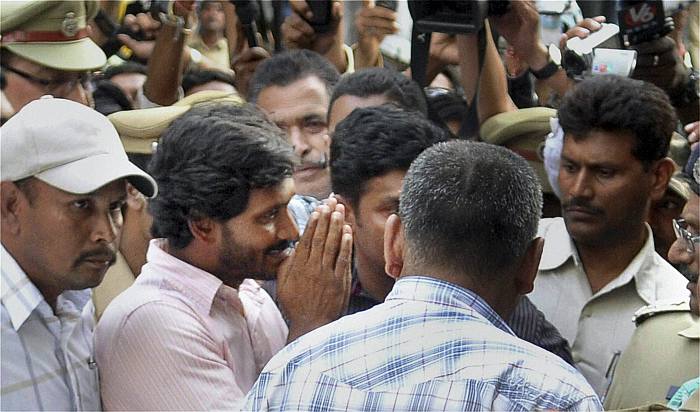 'Bye, Bye, Bye, Bye'
Hyderabad has not seen as much action and political drama as it has this last week. It was in August, 2011 that the CBI inquiry began and ever since, innumerable bets have been placed on the date Jagan would be arrested. Finally, May 27, 2012 it was. Jagan's interrogation by the CBI and his subsequent arrest eclipsed everything else. Cricket, the petrol price hike, the Class X results, the bypoll campaign, the 43 degree centigrade Hyderabadi heat. The IPL final between Kolkata Knight Riders and Chennai Super Kings was pushed into the background. Many Hyderabadis who'd planned to binge on home-delivered pizza and coke while watching cricket found themselves tuning into news channels instead. Jagan's arrest was only a logical conclusion to the CBI questioning which began on May 25 at the Dilkhusha guest house. But for the people of Andhra Pradesh, it will forever be remembered as a historical sequence of events. When Excise Minister Mopidevi Venkataramana was arrested, the stage had obviously been set for Jagan's arrest as well. The visuals of Jagan telling the waiting media as he emerged from the CBI questioning on May 25 were repeated ad nauseam. "Clarifications were sought and clarifications were given. It was cool and peaceful." And then Jagan, yelling out, "Bye, bye, bye, bye" like a school kid off on a picnic.

Qaidi No 6093
The schoolboyish impishness was replaced by a forced smile and namastes as he walked into Chanchalguda jail and donned the qaidi No. 6093 uniform. Jagan is perhaps the first MP of the state to be arrested on charges of corruption. The heavy police bandobast and traffic restrictions preceding the arrest saw Hyderabad turn into a fortress. YSR Congress leaders and party workers were kept under house arrest and buses in districts were kept safely in the depots. As a result, peace prevailed across the capital and districts. The bandh called by the YSR Congress was a bit of a flop show in that sense. 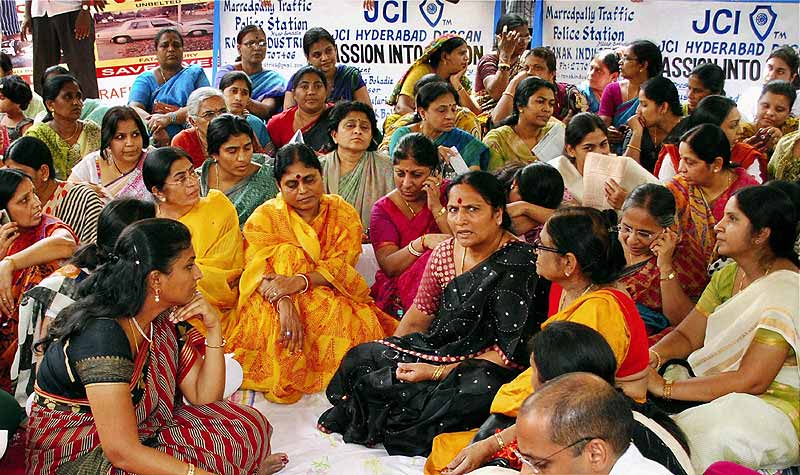 Women Power
The minute Jagan was arrested, out marched the women in the family. Mother Vijayalakshmi, sister Sharmilla, wife Bharathi and some other relatives. They sat on an impromptu arrest and perched themselves on the footpath opposite the guest house protesting the arrest. "While my husband (YSR) worked towards bringing in Rahul as PM, is this what Sonia Gandhi does to my son?" Vijayalakshmi asked. The tears in Vijayalakshmi's eyes, woman police constables carting them away, Bharati crying out "leave me", these might well be the enduring images in the minds of voters not just in the current bypolls but for years to come in state politics. Telugu Desam president N Chandrababu Naidu has never been able to live down the image of the son-in-law who pulled the rug from under N T Rama Rao's feet. Similarly, Chief Minister Kiran Kumar Reddy might forever be seen as the Chief Minister under whom, police dragged away Vijayalakshmi as she protested her son's innocence.

Push Came to Shove
Why was Jagan arrested on Sunday, May 27, even as he was summoned by the CBI court on Monday, May 28? Sources say that Jagan who remained unflappable most of the time turned furious when the co-accused in the illegal assets case, Nimmagadda Prasad, said that he'd lost all his money because of Jagan. The two were being interrogated together by the CBI. Jagan told CBI officials that Prasad had invested heavily (Rs 850 crore) in Sakshi because he knew he would make profits. To this Prasad apparently said, "What profit? In fact, I lost all my money and landed in jail because of you." Sources say Jagan then pushed his chair back in a huff and tried to attack Prasad. When CBI officials tried to stop him, he shoved them as well. A quick call to the CBI director in Delhi ensued and a decision was taken to arrest Jagan immediately. All the district SPs was asked to beef up security, top officials were asked to reach their offices immediately and the stage was for set for the yuva samrat's arrest.

Tough Managers
Jagan's wife Bharathi is one tough cookie. Unlike mother-in-law Vijayalakshmi, Bharathi is not the sort who sheds tears in public. On the contrary, she presents a strong persona. After there were some issues at the top level management in Sakshi, Bharathi began getting involved and manages it on a day-to-day basis now. Having studied in Maris Stella College, Vijayawada, Bharathi is said to have great business acumen and is a tough manager in Sakshi. Fluent in English, it was Bharathi apart from Sharmilla who were seen giving interviews to English media channels following the arrest. Jagan and Bharathi have two daughters.

The Man in the Middle
CBI Joint Director V. V. Lakshminarayana is the man in the hot seat. He is currently leading the investigation in several high profile cases. The Obulapuram mining scam involving former Karnataka minister Gali Janardhan Reddy, the Sohrabuddin and Ishrat Jahan encounter case, former Karanataka CM B. S. Yeddyurappa's illegal mining case, the Satyam Ramalinga Raju fraud case, the Emaar scam apart from Jagan's disproportionate assets case are being handled by Lakshminarayana. The CBI JD whose parent cadre is Maharashtra was posted to Hyderabad in 2006. His deputation in CBI, Hyderabad, is due to lapse in another four months. But going by the importance of the cases he is handling, his term might be extended.

Meanwhile in TDP...
May 28 happens to be the birth anniversary of the late N. T. Rama Rao. Telugu Desam party president N. Chandrababu Naidu paid his respects at NTR Ghat with his wife and son Lokesh. His nephew, actor NTR Jr, and father Harikrishna came separately. The anniversary was of course overshadowed by events in the Jagan case. But what was evident is that the split in the Naidu-Nandamuri family is wide open. This does not bode too well for the party which is facing a bleak result in the bypolls. Naidu is also faced with the possibility of some fence-sitters in his party jumping over to Jagan's side. So he must do all he can to keep the flock together.

Naidu's other brother-in-law actor Balakrishna is set to take a potshot at political rivals in his new movie Adhinayakudu. One line that Balakrishna spouts in the film is a direct attack on Jagan. "True political leaders must live in the hearts of people, not in the form of statues on roads," he says in obvious reference to Jagan unveiling several YSR statues in the course of his Odarpu yatra. Maybe Akhilesh Yadav can take a cue if he wants to heap similar insults on Mayawati.