How We Treat Those Who Dare

Buta Singh may not have any moral authority, but he sure does have constitutional authority, as he demonstrated today in a cynical move by his controversial order, to say the least, shifting Siwan district magistrate CK Anil and his Gopalganj counter 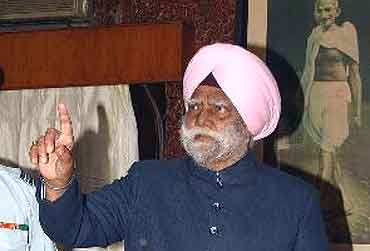 Just when there is a glimmer of hope in the blackness of Bihar, just when almost the entire nation is celebrating that there are still some people out there, in that bottomless abyss, who believe in the old fashioned dictum of "do your duty", just when it seems that being an MP need not ensure immunity from the law of the land, just then the political class decides it's time for retribution in cynical disregard to public opinion.

And this time the political class is represented by none other than the hon'ble governor of Bihar, Buta Singh. The same Buta Singh who only yesterday was reminded by the opposition leader Sushil Kumar Modi of his role in the JMM bribery case, and his lack of moral authority in speaking about horse-trading.

Well, Buta Singh, that old Congress relic, may not have any moral authority, but he sure does have constitutional authority (thanks to his political masters), as he demonstrated today in a cynical move by his controversial order, to say the least, shifting Siwan district magistrate CK Anil and his Gopalganj counterpart K K Pathak.

CK Anil doesn't need any introduction to our readers, but for those who came in late, here's a reminder: Siwan is the Parliamentary constituency of the RJD Lok Sabha member Mohammed Shahabuddin and Gopalganj that of Aniruddh Prasad alias Sadhu Yadav, the railway minister Lalu Yadav's brother-in-law, recently in the news in the flood-scam involving former Patna DM Gautam Goswami.

The news is yet fresh off the wires, and the transfer orders for the two district magistrates have been confirmed by Bihar Chief Secretary K A H Subramanian.

The trouble began at the time of recent Bihar assembly polls when Anil externed RJD MP Shahabuddin from the Siwan district limits to ensure free and fair assembly poll in Siwan. Anil had booked Shahabuddin under the Bihar Control of Crimes Act and transferred him to Beur jail from Siwan jail. The then Chief Minister Rabri Devi had refused to confirm Anil's order, once the election process was over, and Shahabuddin was back at Lalu's residence, full of bluster and bravado, merrily giving sound-bytes to the media about leaving no stone unturned to form a RJD-led government.

Once Rabri had to resign, and the governor's rule was imposed, Anil was quick to initiate fresh proceedings against Shahabuddin. Raids on his ancestral house at Pratappur last month led to recovery of firearms, Pakistan-made cartridges and foreign currency notes. So he was booked under CCA.

Likewise, Pathak had 'dared' (merely doing one's duty is no less than a heroic act, in these times) to extern the erstwhile CM's brother during elections in February from Gopalganj. One doesn't know what rationale Buta Singh's PR machinery would churn out, if at all they ever condescend to, but the opposition's charge that this has been done "to appease" RJD president Lalu Prasad would find echoes all around.

Wanted: men of guts, you say? India's most wanted, you call them? Well, here's how we reward them, seems to be Buta Singh's message, as he goes around affirming his "authority".

The questions that these transfers raise, and of course, their timing, particularly in the background of the mass-scale transfers a week back are disturbing enough, but meanwhile it would be useful to revert back to the earlier, more pertinent questions: