Home  »  Website  »  Business  » Opinion  »  Growing Up With AIDS
Beyond business

Growing Up With AIDS

Next time you hear a cricketing icon exhort us all to freely talk about Hetch High Wee, perhaps it is time to remember that it has the potential to knock 0.86 percentage points off India's GDP growth, which translates to about Rs 25,000 crores 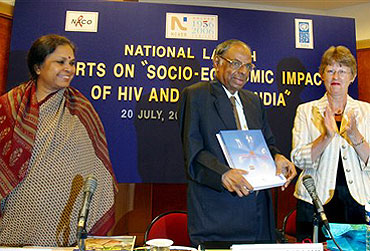 What influences or affects the growth of an economy? Even without recourse to chaos theory, we can say: nearly everything. A person’s income, saving, consumption and all the factors that change it—education, lifestyle, job, ambition, celebrations, illnesses … Since people are the major resources of a country, their deaths, at an early age, will obviously affect GDP. But, if each illness accounts for a slice of growth, will there be any growth left at all in a developing country like India?

It’s a question that the brilliant Dr C Rangarajan, former RBI governor and chairman of the PM’s economic advisory council and the independent Asia-Pacific commission on AIDS, asked while looking through a brand new NCAER study that estimates that AIDS has the potential to knock 0.86 percentage points off India’s GDP growth on average in the next ten years. Goodbye double-digit growth?

The number all but burst a bomb in the crowded conference hall. Coming soon after the news that India wants to legalise homosexuality and the ongoing work on a law that seeks to strongly protect the rights of HIV-positive/AIDS patients and outlaw stigma and discrimination, it showed that India’s efforts of acknowledging the crisis are finally coming together.

India saw its first AIDS death 20 years ago. That year, it was the single case. The diagnosis must have been a supremely fortunate event because even now, the deaths from AIDS are only those that get reported. Many patients could be unaware and undiagnosed. Many others are hidden or dumped on death. Tip of the iceberg just about sums it up. Till July 31, 2005, the number of AIDS cases reported since 1986 was 1,11,608 -- 47 per cent of them in Tamil Nadu alone.

Of course, nobody yet knows how large the iceberg is. Many global estimates put India on a severe-hazard list. Along with China and Russia, it is supposed to bring up the second wave of the epidemic. Some NGOs put the number of HIV-infected people at 15 million, touching 25 million in the next six years. NACO doesn’t agree with these estimates. According to them, less than one per cent of Indians are infected with HIV. But go to the real number, and it is a whopping 5.2 million. Only about 20 per cent offer themselves up for treatment.

UNAIDS has a slightly higher figure—5.7 million, which makes it the largest in the world, over South Africa’s 5.5 million. More than half of these hapless people are in rural areas, close to 40 per cent are women, many of them widows, and 35 per cent are in the 15-29 age group. The unusually high prevalence of the virus among youth and widows, in a country that still doesn’t talk about sex, makes AIDS a very serious danger still taking shape.

The NCAER study’s findings run on expected lines. Labour supply is likely to fall by 0.31 percent, with unskilled labour the worst hit. Government savings as a percentage of GDP could dip by 0.67 percent, household savings by 1.15 percent, household income by 0.46 per cent and investment by 1.16 per cent.

Research has shown that AIDS tracks the poor: poverty turns fathers into migrants, mothers into sex workers, and leaves health care out of reach for most. So the affected families often have elder people as well as children going out for work, increased medical expenses and therefore borrowing, less or nil savings, and sometimes a nomadic existence once their condition becomes known. The women are most often thrown out, adding to the pool of sex-workers, while the men, because of social stigma, swell the army of unskilled labour.

Even among the infected, the worst affected sections of the population are widowed women and migrant labour. Of late, with more youth getting affected, labour-intensive sectors like agriculture, transportation, tourism etc, even industry, will be the worst hit over time. Construction, chemicals, and mining and quarrying, capital goods and textiles were among the other most vulnerable. Another affected sector is health, where budget constraints will force trimming of outlays for other diseases.

As yet, India is spending very little money on AIDS control, compared to the size and complexity of its problem, and compared to other countries. Awareness is still dim in the corporate sector, along with a lower sense of priority and urgency for the illness. Although India is the world's leading producer of generic drugs for the treatment of AIDS, most of it is ironically exported to Africa. But it is also one of eight countries currently conducting human trials of a US-developed AIDS vaccine. The Indian Council of Medical Research reports a successful first round of trials and indicates that a marketable vaccine may be within reach in another five years. Once that happens and even before that, the government will need a huge hike in health sector outlays, to subsidise the treatment and also for preventive care. Much of it though can be expected from the Gates Foundation.

The NCAER report, in the words of its project chief, still needs a lot of fine-tuning of data as well as variables. It may have also overestimated the economic impact on growth, especially when the impact on investment is low—after all, 0.86 per cent of GDP comes to around Rs 25000 crore! But as long as this succeeds in drawing the attention of policymakers and citizens alike to the seriousness of the HIV menace, India may have a chance of winning this battle in the distant future.