Grateful For All The 'Kichad' Thrown At Me, After All, A Lotus Blooms Only In Kichad, Says PM Modi In Gujarat 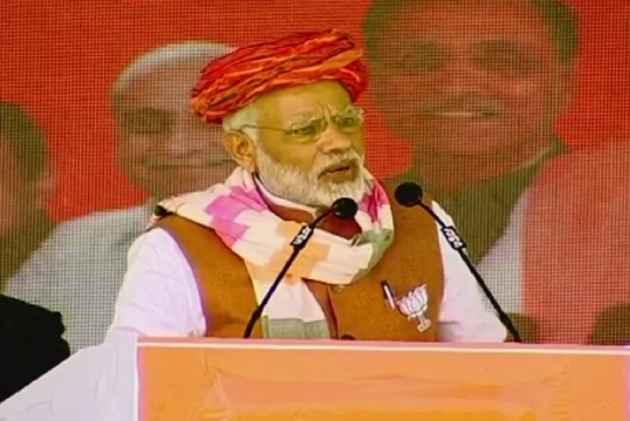 Prime Minister Narendra Modi today addressed a public gathering in Gujarat's Bhuj ahead of the elections.

PM Modi during his meet, slammed his critics saying that he is thankful for all the 'Kichad' that were thrown at him as a Lotus can grow only in 'Kichad'.

"I am grateful for all the 'kichad' being thrown at me, after all, a lotus blooms only in 'kichad' so, I don't mind if more is thrown at me," he said.

Alluding to Rahul, the prime minister said a large number of people had tried to malign the image of the state.

Urging the crowd to vote for them, the prime minister said the battle for Gujarat was between development (vikas) and dynasty politics (vanshvaad).

The prime minister slammed the Congress further, saying that "Gujarat has never accepted the Congress, because it has meted out injustice since the time of Sardar Vallabhai Patel."

He also urged the people to give a befitting reply to the insults made by the Congress and said they would not pardon the party.

"How does the Congress have courage to come and disrespect people of Gujarat?" he questioned.

Taking a jibe at the Congress, the prime minister said that some people love to spread negativity and pessimism. "My appeal to them is to stop doing that. They lack Neeti, Niyat, a Neta and a Naata with the people."

Prime Minister Modi also accused the Congress of not being serious about development and said the Narmada waters could have reached Kutch 30 years ago, but didn't.

"Officers did not want to get posted to Kutch region as the water here was black in colour. The Congress did not allow Narmada water to come to the Kutch region. What if the Narmada waters had come to Kutch 30 years earlier? It would have made such a big difference," the prime minister added.

The Prime Minister also slammed the Congress for criticizing their demonetisation move and said, "I will ensure that the poor get their due. We will not allow this nation to be looted."

Recalling the devastating earthquake that struck the Kutch distrcit in 2001, the Prime Minister said the mishap gave him valuable lessons.

"When an earthquake struck Kutch region in 2001, Atal Bihar Vajpayee sent me to the region to work among its people and that taught me a lot," he said.

Expressing his love for Gujarat, the Prime Minister said, "Gujarat is my Atma (soul), Bharat is my Parmatma.(God). This land of Gujarat has cared for me, Gujarat has given me strength."

Prime Minister Modi, who is on a three-day visit to his home state, is expected to attend at least 20 public meetings and rallies in the next 15 days ahead of the assembly polls to be held on December 9 and 14.