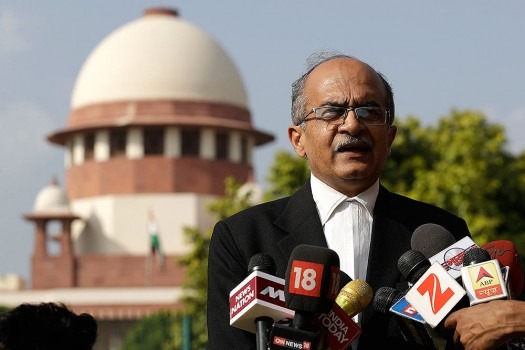 Activist lawyer Prashant Bhushan today accused the Centre of trying to take away the independence of judiciary and again targeted Chief Justice of India Dipak Misra over the medical college bribery case in which the Supreme Court has already dismissed two petitions.

The activist lawyer, who has been raising the issue under the banner of Campaign for Judical Accountability and Reforms (CJAR), brought up the same issues under the banner of 'Janhastakshep', an activist body and Peoples Union for Civil Liberties (PUCL), a human rights organisation.

Bhushan was speaking at a discussion organised by 'Janhastakshep' and PUCL on the topic - 'Felling of the Last Bastion: Is Indian Democracy in Peril'.

Bhushan has come under attack from senior advocate Vikas Singh, who has been appearing for the Medical Council of India (MCI), for his allegations against the judiciary.

In a letter to the four dissenting judges Justices J Chelameswar, Ranjan Gogoi, M B Lokur, Kurian Joseph and A K Sikri, Singh had condemned the conduct of the CJAR in filing a complaint with them accusing the CJI of alleged misconduct in the medical college bribery case related to Prasad Education Trust.

Singh alleged that a group of activists under the banner of CJAR was trying to "scandalise the judiciary" by levelling "false charges" against the CJI in connection with a medical college bribery case.

At an unprecedented press conference on January 12, Justices J Chelameswar, Ranjan Gogoi, M B Lokur and Kurian Joseph attacked the CJI on the issue of allocation of sensitive and important PILs in the apex court.

Singh has said in his letter that he was "quite confident" that there was no wrong doing by the apex court while dealing with them and sought contempt action against the activist lawyers for allegedly maligning the judiciary.