BJP has finally exploded yet another myth about its allies that while a "moderate" like Vajpayee may be acceptable to them, a "hardliner" like Advani would not be. The stage is set for a "hardline" experiment in the run-up to 2004 elections. 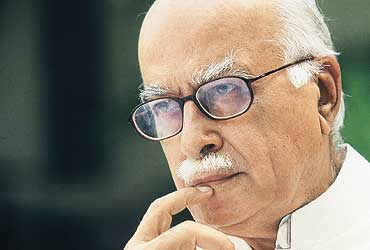 outlookindia.com
-0001-11-30T00:00:00+0553
For the home minister, his appointment as deputy prime minister is a confirmation of his position into de jure from de facto number two in the Vajpayee government. But the analysts are right in seeing it as yet another step taken by the BJP in preparation for the 2004 Lok Sabha polls, or at least ensuring that there won't be any hitch when it comes to choosing a successor to Vajpayee at the helm.

And Advani seems to be relishing this public acceptance. He went so far as to say, in an interview to NDTV's Rajdeep Sardesai, that "this removes illusions about Vajpayeeji," but added that it should not be seen as proof that he was Vajpayee's successor, but as evidence that the relationship between the two leaders remains a strong one.

Indeed, the good cop-bad cop roles the duo have perfected to an art form is not something that, to use Rajdeep Sardesai's felicitous mode of address, "Mr. Advaniji" ever shies away from, though he has been careful in expressing his reaction: "It is a matter of honour for me and I wish to thank the prime minister and all our partners in the NDA. I pray to god that I will be able to live up to this faith."

Not Surprised
While the prime minister had dropped hints earlier, the decision was finally taken after defence minister and NDA convener George Fernandes told Vajpayee on Saturday morning that none of the allies objected to the proposal. Fernandes had mooted the proposal last week.Disclosing that Vajpayee had discussed with him the issue of deputy prime ministership on Thursday, Advani said: "But when my colleague George Fernandes talked and took suggestions from other members of the NDA and when it was brought to my notice, I got the impression that some steps are being taken."

Two power centres?
No, he says -- but he will, won't he? -- it will only strengthen the NDA and that though the prime minister could have taken the decision himself, the fact that he consulted all the allies and that they all unreservedly were in favour of it, he says, strengthens the credibility of the government.

"The prime minister used to consult me even earlier," he says, adding, "now it has just been formalised. But yes, in the eyes of my ministerial colleagues and the people, my responsibilities have increased."

Historical precedents
Advani, who has always cited Sardar Patel as a role model (as against Nehru for Vajpayee) seems to imply that it is but natural that he should be following in the footsteps of the country's first deputy prime minister, but bristles at the mention of others, suggesting that his appointment is not like those which were, according to him, mere devices to sort out problems within different parties or in one case, factions within a party.

Those who remember their Congress history and the Nehru and Patel factions within the party could quietly snigger.

Morarji Desai was the country's second deputy prime minister (a post which, incidentally, has no constitutional validity or provision) as an outcome of an intense power struggle within the Congress inherited by Indira Gandhi-- a trend that has shadowed every such appointment since.

And since irony never seems to elude Indian politics, Morarji bhai himself was forced to appoint two deputy prime ministers in 1979 -- Charan Singh and Jagjeevan Ram -- in a desperate effort to prevent the collapse of the Janata Party experiment.

Ten years later, Devilal was appointed to the post by prime minister V P Singh. Once again, it only resulted in the creation of two power centres, and the collapse of another government. Chandrashekhar tried it again in 1990, although his government lasted only a few months.

While the BJP-supporters hope, or at least claim, that the Vajpayee-Advani equation will help in creating a clearer chain of command within the government, the skeptics are already betting on the number of deputies any coalition headed by Advani in a post-Vajpayee scenario may have to employ.

Why now?
The public explanation is that it is the prime minister's "inimitable" way to silence the unrelenting and sustained speculation and reportage over the differences between the two. And of course there is that recounting yet again of the time Vajpayee had dropped by to have lunch with Advani last year, when speculation about the rift between the two had been intense.

But BJP-watchers are also keen to point out the whole l'affaire Alex Perry and the "Asleep at the wheel" story which has been timed to perfection. Congress spokesperson Jaipaul Reddy seems to have been right for once: "it is not a promotion for Advani but a degradation of Vajpayee".

See this in conjunction with the recent appointments of Vinay Katiyar, Shiv Sena's Manohar Joshi, the BJP A-team of hardliners and Advani loyalists in the party and the pieces seem to fit.

It's going to be back to hardcore Hinduttva in the upcoming polls. Early 2003, Gujarat and Himachal Pradesh would be going to polls. Later the same year, assembly elections are due in Rajasthan, Madhya Pradesh, Delhi and Chhattisgarh. Early 2004, state assemblies like Orissa, Karnataka and Bihar will go to polls and by September-October 2004, general elections are due.

Successor?
"The move should not be seen as paving the way for a successor to Vajpayee as both of us are of the same age group ... He Vajpayee, Khushabhau Thakre and I are all over 70 years of age and any question of a successor would have to fall on a younger leader."

While Vajpayee is on record that he would not like to contest the next elections, Advani says BJP thinks otherwise. "My view on this is firm and I believe that he (Vajpayee) will abide by it," he says, and hopes that Vajpayee will "lead us for a long, long time."

Ideologue to strategist
When questioned closely about his "hardline" image, and his identification with being the architect of the ram-janambhumi movement, of being an "ideological mascot" of BJP, Advani doesn't shy away from underlining his commitment to the BJP ideology, but swears by the compulsions of coalition politics which necessitate working within a commonly agreed programme.

.It's a matter of nuances, says the deputy prime minister, and says he is proud of what he has done to bring his party to the position it is in. And as always, he is clear about the image, that while it may not have been fair to him personally, it "has helped the cause of the party". Indeed, hearing him speak seems that the deputy prime minister has a compulsive need to suggest that de facto, there is no difference in the way he and the prime minister think, that it has always been a grand strategy, as if, where prudent moves have been made keeping real politik in mind.

Mr. Advaniji's parting short to Rajdeep Sardesai of NDTV in the interview telecast today was revealing: "If anything, it removes illusions about Vajpayeeji."

So one way of seeing it would be to see it the Congress way -- that it is the degrading of Vajpayee. The other is to see it the BJP-Sangh way -- they have moved one step closer in the smooth transition to the successor. If nothing else, the coming state polls before the 2004 general elections will prove to be a good experiment with the hardliners in command, giving BJP time to adjust and fine-tune its 2004 campaign.

'War With Pakistan Ruled Out'