The Opposition Left Democratic Front (LDF) swept to power in Kerala, notching its best-ever tally of 98 out of the 140 seats, while ruling Congress-led United Democratic Front (UDF) ended up with just 42 seats. The BJP drew a blank.

The Opposition Left Democratic Front (LDF) swept to power in Kerala, notching its best-ever tally of 98 out of the 140 seats, while ruling Congress-led United Democratic Front (UDF) ended up with just 42 seats. The BJP drew a blank.

Chief Minister Oommen Chandy won from his home turf of Puthupally for the ninth time but seven of his Cabinet colleagues bit the dust. Voters rejected the opportunistic poll-eve patch-up between the Congress and the breakaway Democratic Indira Congress (Karunakaran), better known by the acronym DIC (K), defeating all but one out of its 18 candidates. Losers included DIC (K) State president K.Muraleedharan and former Irrigation Minister T.M.Jacob.

The veteran K.Karunakaran termed the DIC (K) rout a result of "leg-pulling by Congressmen". CWC member A.K.Antony said the Left owed its win to the "rare combination of communal and caste forces".

Oommen Chandy was modesty personified saying he accepted principal responsibility for the UDF debacle. "But the Congress does not see this as people’s revenge. We’ll do a proper soul-searching. Now it’s for the LDF to go ahead with its development agenda". 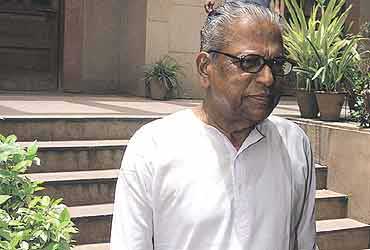 Opposition leader V.S.Achuthanandan, the Chief Minister-probable, won a thumping margin of 20,000 votes in his sitting seat of Malampuzha. Achuthanandan-supporters erupted into frenzy, bursting crackers and taking out rallies in Palakkad town and suburbs, shouting slogans for "VS, our chief minister".

College lecturer and erstwhile Youth Leaguer K.T.Jaleel is the giant killer, having snared the lion in its den at Kuttipuram. Dr Muneer, son of the late Chief Minister C.H.Mohammed Koya, came a cropper at Mankada.

The League which had worked overnight to bring Muraleedharan back to the UDF failed to ensure his victory in Koduvally, another League bastion.

INA leader P.M.A.Salam, who won in Kozhikode II, asked the League leadership to dismantle the party as "they can no longer claim monopoly of the Muslim vote".

The jury is still out on whether it was bread and butter issues that busted the League bastion or the Left rabble-rousing campaign against the imperialist forces, US President George Bush, the India Government vote against Iran and the US attacks on Afghanistan and Iraq.

The results tallied with the exit poll prediction of a landslide for the LDF, almost copycat reversal of the poll verdict in 2001 when the UDF strode to power with 99 seats, leaving the LDF with 40 seats. This time the LDF snatched an additional 58 seats form the UDF. Out of the 98 seats, one seat has gone to the LDF ally, Indian National League, founded by the late Ibrahim Sulaiman Sait.

The Marxist fortress of the northern district of Kannur stood by it while the LDF made inroads in Thiruvanthapuram, the pro-Christian Kottayam and the Muslim-dominated Malappuram and virtually gobbled up the majority of UDF seats in the remaining 10 districts.

There were 21.48 million eligible voters, including 11.14 million women, in the 14 districts of Kerala. In all 72.57 percent voters cast their vote. The LDF polled 48.5 percent and UDF 43 percent. The BJP vote share was static at 4.75 percent as in 2001 elections. Its all-time best was in the last Lok Sabha elections when it polled 12 percent.

Dr Gopa Kumar, the head of the Kerala University Department of Political Sciences, saw the LDF vote accretion as a result of the partly Muslim, partly Christian, upper caste, youth and very poor sections gravitating towards the LDF.

The LDF proved more realistic this time roping in People’s Democratic Party of jailed Muslim leader Abdul Nasser Madhany, Jama’at-e-Islami and the Sunni faction of Kanthapuram A.P.Abubacker Musaliyar. It also got the support of the pro-backward Sree Naryana Dharma Paripalana Yogam while the pro-forward caste Nair Service Society followed a policy of equidistance, backing its candidates irrespective of the coalitional divide.

Former Delhi Development Commissioner K.J.Alphons won in a spirited four-cornered contest despite being dubbed as an apostate for is membership of the sect, Jehova’s Witness, in the Christian heartland of Kanjirapally in Kottayam.

Former Forest Minister Dr A.Neelalohitadasan Nadar, who was sentenced in two molestation cases, lost in a three-cornered contest in the tourist hotspot of Kovalam.