Flavour Of The Day

The new theme of excitement for the TV channels is what Israel is doing in Lebanon--should India emulate Israel? Where are the analysts discussing the progress of the investigation and posing inconvenient questions to the police and our national secu 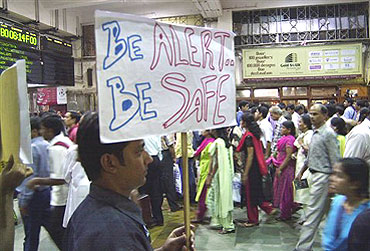 The apparent lack of progress in the investigation into the Mumbai-11/7 blasts by as yet unidentified elements is understandable. Investigation into terrorism-related cases is a time-consuming process--particularly when the terrorists are adept in covering up their tracks as they seem to have done in this case. It would, therefore, be unfair to find fault with the Mumbai Police for the lack of any break-through so far.

Having said that, one has to underline some disturbing indicators relating to our counter-terrorism capability,  prevention and investigation. It is apparent now that the suburban railway system in Mumbai had very little physical security. The terrorists had noticed this, but not our national security managers at the central and state levels.

What are the reported facts?

The second disturbing indicator relates to forensic examination of the scenes of the terrorist attacks, particularly the railway compartments in which the explosions took place. Normally, in any investigation done in a professional manner, the first step is to identify the place where the explosive device was placed, isolate it and mount a guard till forensic experts have thoroughly examined the place and gathered all evidence of forensic value.

One has the impression that this was not done for some hours. As a result, there seemed to have been considerable disturbance of the scenes of the blasts by police and railway staff, humanitarian workers and other curious on-lookers. The disturbance was apparently so bad that experts in explosives could not even get adequate samples from the blown up compartments by examining which they could have determined the nature of the explosive.

As a result, there has been some delay and avoidable confusion in determining the nature of the explosive used. Initially, RDX was suspected. Subsequently, dynamite. Then, ammonium nitrate. Finally, a mixture of RDX, ammonium nitrate and fuel oil. Even now, differences are being voiced through the electronic media by different forensic experts on the nature of the explosive.

The latest indicator--not yet conclusive--is that the terrorists used a mixture of RDX, ammonium nitrate and fuel oil, triggered by a mechanical timer with a Chinese-made battery. It has been reported that similar improvised explosive devices (IEDs) had been used in the past by jihadi terrorists belonging to the Harkat-ul-Jihad-al-Islami (HUJI) based in Bangladesh.

The President, Dr. Abdul Kalam, and the people of Mumbai and the rest of India showed a tremendous gesture by paying homage to those killed by the terrorists on the evening of July 18, marking the completion of one week since the tragedy struck. It was a moving scene, but was it necessary to hold it in the railway premises? The President himself led the ceremony at Mahim railway station. In honour of the President, the whole place was reportedly spruced up and the walls white-washed.

Nobody seems to have realised the importance of ensuring that no evidence of forensic value was lost, till the forensic examination was completed. Sometimes, even days after a terrorist strike, one finds bits and pieces of evidentiary value here and there--residues of the explosive on a wall, a bit of a timer here, of the battery there etc. By disturbing the railway premises, we are unwittingly  damaging, if not destroying, evidence of forensic value.

Was it not possible to hold these functions elsewhere far away from the scenes of the blasts? Did anyone brief the President about the inadvisability of holding them in the railway premises?

The third disturbing indicator is about  the investigation into the case relating to the discovery of over 40 kilos of RDX explosive by the Police in May, 2006, in the Aurangabad area. Some local Muslims were arrested by the  police in this connection, kept in police custody and then sent to judicial custody after interrogation. The police are naturally having a second look at this investigation in order to see whether they might have contained clues about the explosions of 11/7, which they might have missed at that time.  Going back into past cases in order to look for missed clues is part of the investigation process

One gets the impression that despite questioning about 12 persons allegedly involved in the transport of the explosives in May, 2006, the police could not establish where from they brought the explosives, in which quantity, were there other quantities stored elsewhere, by whom etc. It has been reported in the media that the police are trying to seek fresh police custody of these suspects in order to question them further regarding the origin of those explosives. This, if true, does not speak well of the thoroughness of the earlier investigation.

We have been having acts of jihadi terrorism at regular intervals since July 5, 2005, when they resumed after a lull of nearly two years since September, 2003. How thorough has been the investigation into those cases? Have we been able to establish who fired the shot, which killed the scientist at Bangalore in December?

One sees a certain disturbing pattern being repeated after every jihadi terrorist strike--excitement all round, names of alleged suspects being disseminated through the kindness of willing journalists, a plethora of theories--some plausible, some fanciful-- raids into the houses of likely suspects here and there, claims of major break-through and then silence, with nothing more said or apparently done about the investigation.

A similar thing is already happening in respect of Mumbai--11/7. In the newspapers which I read, it has already disappeared from the front pages. The new theme of excitement for the TV channels is what Israel is doing in Lebanon--should India emulate Israel? Less and less analysts are discussing the progress of the investigation and posing inconvenient questions to the police and our national security managers.

We are back to our normal state of excitement--with more time, column space and prime time being spent on the progress in the Congressional approval of the India-US nuclear deal than in the investigation of the Mumbai blasts. We are more preoccupied with the nuclear  and other so-called strategic issues and discussing animatedly how should India play its role as an emerging global power, without worrying about our chronic inability to ensure effective internal security.

It is time the Central government starts exercising a vigorous leadership role in strengthening our counter-terrorism capabilities--prevention through timely intelligence and effective physical security, deterrence through thorough investigation and prosecution leading to convictions and mobilising the people through a national consensus. How can our political leaders mobilise the people and motivate them to join hands in the fight against terrorism when they cannot mobilise and motivate themselves to join hands?

Whether we admit it or not, Al Qaeda has arrived in India--not as an organisation, but as an ideology, as a source of inspiration and sophisticated modus operandi, as the puller of the jihadi strings from its bases in Waziristan in Pakistan. Jihad in India has started becoming part of the global jihad.  More Mumbais are likely if we do not draw the right lessons and start acting vigorously against the new jihadi terrorism.