Sussanne Khan, an interior designer, stated today that star kid Aryan Khan was "in the wrong place at the wrong time" in response to social media users vilifying actor Shah Rukh Khan's 23-year-old son after his arrest in the Mumbai drugs-on-cruise case.

Sussanne Khan, who is said to be a close family friend of the Khans, commented on a journalist's Instagram post. She wrote, “I think this is not about Aryan Khan, as he was unfortunately at the wrong place at the wrong time. This situation is being made an example to drive home the excitement that some people get as they have a witch hunt on people from Bollywood (sic).” The journalist in the post had claimed that the arrest of Aryan Khan should be taken as "a wakeup call for parents." 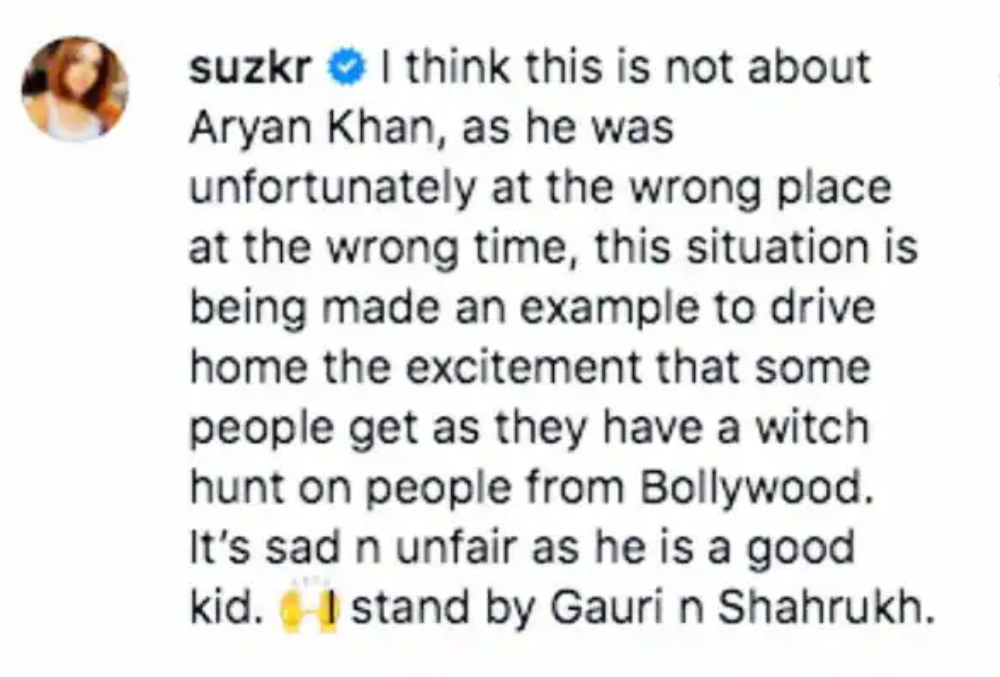 Sussanne Khan, the ex-wife of actor Hrithik Roshan, is reported to be close to Aryan Khan's mother, Gauri Khan.

Aryan Khan was detained by the Narcotics Control Bureau (NCB) for alleged drug possession and substance misuse when agents in disguise stormed a rave party aboard the Cordelia Cruise ship on its route to Goa. On Saturday evening, eight people were apprehended, including Shah Rukh Khan’s son, Aryan Khan.

As per reports, Aryan Khan was denied bail and ordered to be held in custody until Thursday by a Mumbai court on Monday, despite the fact that his counsel claimed in court that he was a special invitee to the cruise liner and thus "cannot be roped in with the entire seizure in the case."

According to the anti-drug bureau, the raids yielded 13 grammes of cocaine, 21 grammes of charas, 22 tablets of MDMA, and 5 grammes of MD. The narcotics were discovered disguised in clothing, underwear, and handbags, according to the Press Trust of India, citing an anonymous anti-drugs bureau official.

Neither Shah Rukh Khan nor anybody else in the Khan family has yet commented on Aryan Khan's detention.

Mayawati To Hold Public Rally In Agra On 2nd February