Food, especially meat, was at the centre of IIFB 2020’s concerns, with films like ‘Aamis’, ‘Biriyani’, ‘Aani Maani’, ‘Jallikattu’ and ‘Axone’ focused on meat and its politically charged connotations in the present times. 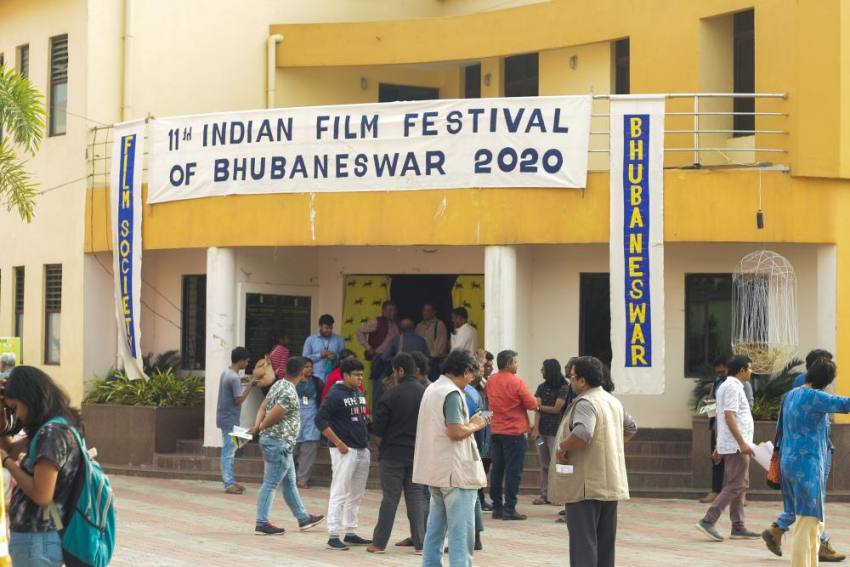 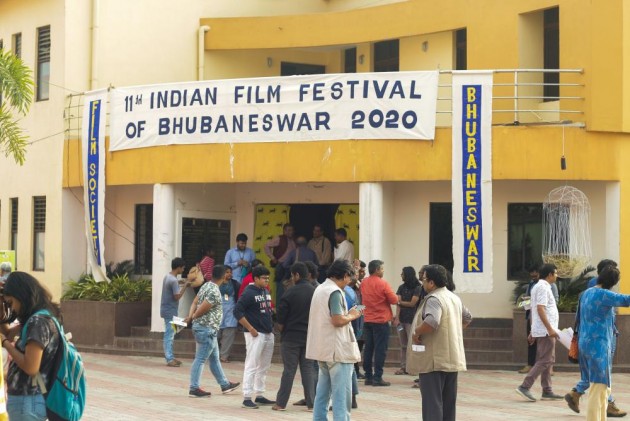 This year's IFFB, held between 23rd to 26th of January, carried movies by young filmmakers such as Fahim Irshad Khan, Wanphrang Diengdoh, Kisalay, Rahat Kazmi and Ronny Sen. Films screened included much-discussed recent ones such as 'Biriyani', 'Aise Hi', and 'Lihaaf.’ This latest edition of IFFB also had a retrospective section of films by Mrinal Sen. But it could not screen Sen’s 1966 Odia film ‘Matira Manisha,’ an adaptation of the eponymous Odia novel by Kalindi Chararan Panigrahi; like most of the older Odia films, this classic by Sen is yet to be digitised.

Food, especially meat, was at the centre of IIFB 2020’s concerns, with films like ‘Aamis’, ‘Biriyani’, ‘Aani Maani’, ‘Jallikattu’ and ‘Axone’ focused on meat and its politically charged connotations in the present political scenario.

‘Aamis’, by Axomiya filmmaker Bhaskar Hazarika, was the opening film of the festival. It starts with a lot of promise in its portrayal of quotidian life in Guwahati centred around the friendship between a young PhD student of anthropology and a paediatrician, Nirmali (played by Lima Das). But it ultimately disappoints in the purportedly literal yet ultimately unconvincingly fantastic ways in which it deals with the theme of cannibalism.

‘Biriyani’ by film-maker Saajin Babu, was perhaps the most satisfying of these films. This Malayalam flick follows the travails of a Muslim woman Khadeeja (played by Kani Kusruti) whose brother has been radicalised by the Islamic State (IS) and dies in an encounter; her mentally ill mother passes away in the subsequent trauma.

Many films at this year’s IFFB also tell stories of small cities like Shillong, Guwahati and Allahabad, like in ‘Aise Hi’--the star film of the festival for this writer. Set in present-day Allahabad with self-appointed cow protectors marauding the streets, it focuses on an elderly Brahmin woman who starts creating a life for herself after the death of her husband.

These movies also tell the story of friendship, especially between men and women.

In ‘Lihaaf’, the story of friendship between Urdu writers Saadat Hasan Manto and Ismat Chughtai (and them fighting obscenity charges regarding their fiction in British courts), parallels the other strand of the film (that depicts an eponymous, much anthologised short story by Chughtai) in which a Begum, neglected by her husband, finds solace in her female masseur’s company and body.

In the closing film of the festival, Goutam Ghose’s ‘Raahgir,’ we see an unlikely friendship develop between Nathuni, a poor tribal woman who has a paralysed husband and children to support, and Lakhua, a man orphaned early in his life.

The Strange Case of a Late Flowering in ‘Aise Hi’

Similarly, in ‘Aise Hi,’ a recently widowed septuagenarian Brahmin woman, referred to as Mr Sharma in the film (and played by Mohini Sharma), starts learning embroidering from a man with whom she develops an easy camaraderie. She also becomes friends with a young beautician and starts doing things that she has perhaps never done before -- getting a facial done and buying roses to decorate her house.

This starts ruffling feathers in the largely middle class and upper-caste neighbourhood she lives in, and her apparently wayward manners make her neighbours question her mental stability following her husband’s death.

‘Aise Hi’ is as much the story of a woman’s late and tentative flowering into independence and the inability of her social milieu to deal with it, as it is about the story of a family and a city that are dealing with financial and social crises.

The heat of the North Indian summertime which the film depicts is made palpable by its slow, meditative pace. One of the most memorable scenes from this film and the festival, was that of Mrs Sharma lying down in the dark on the banks of a river with the beautician, listening to the night calls of birds that have now become rare in cities.

The curation of these films, although well thought out, seems focused on the thematic concerns of a narrowly defined political nature while being a little unmindful of the formal suturing of the films that were screened. The schedule was very tightly packed, leaving little time for informal discussions.

The sitting arrangement in the auditorium in which the screenings took place, was very uncomfortable. This space was inappropriate for a film festival and the consequent long viewing hours, as it was created for watching Odissi dance performances over short periods of time. It has been latter retrofitted for other viewing possibilities.

The retrospective of Mrinal Sen’s films took place in an open space in the compound, within which the main hall was located; this was suboptimal with the surrounding sound and light interfering with the viewing experience. The organisers perhaps cannot be blamed for this as outside the multiplexes, the twin cities of Bhubaneswar-Cuttack do not have even a single space for screening multiple films at the same location. This leads us towards larger questions about public provisioning of cultural infrastructure in Cuttack-Bhubaneswar and in most similarly sized cities across India. 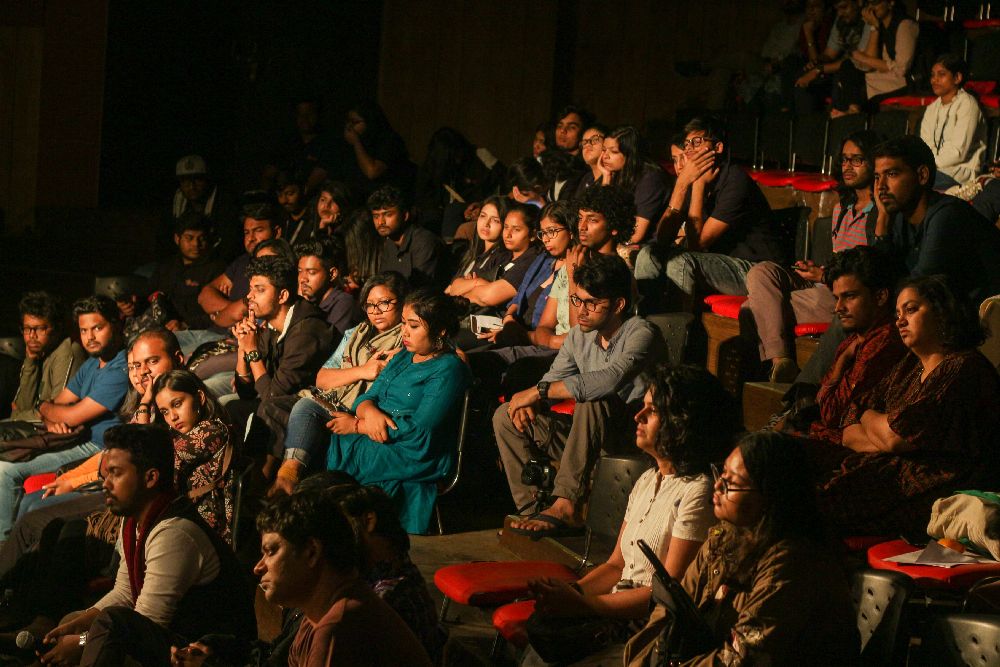 In 2018 and 2019, IFFB was held for seven days each and a much larger number of films could be screened, because of the support of many corporate organisations. There is indeed an overwhelming dependence on funding support by larger corporations to run the festivals of FSB. According to Sibapada Swain, convener of the last three editions of IFFB and an active participant in the film society movement in India since the last three decades, the reason for this is the minuscule governmental support for such initiatives in Odisha.

In contrast, most other major festivals across India, such as those in Kerala, Chennai and Bangalore, have the state government as a major supporter; in Mumbai, a large telephone operator is a patron. When one keeps in mind that it is the Department of Industry that deals with cinema in Odisha and not the Department of Culture, this state of affairs does not seem that strange.

Due to such challenges, the earlier team associated with FSB (formed in 2004) focused more on monthly screenings rather than on festivals. Over more than fifteen years of its existence, the Society has screened more than five hundred movies from across the world, a large number of which have been shown in the monthly screenings.

With a change of guard two years back, the focus seems to have shifted to operating in the festival mode, with the monthly screenings being missed in a few months. This raises questions about sustainability, as it was possible for FSB to run the monthly screenings regularly, based only on very reasonable membership fees. Festivals need much more resources; and with no public provisioning for quality cinema in Odisha, it is not clear for how long FSB can sustain its current ‘festival turn’.

Challenges of Creating a New Audience

Over the last couple of years, there have been many positive changes, with students from local educational institutions such as Biju Patnaik Film and Television Institute of Odisha (BPFTIO), attending the festivals in large numbers. But this is because of institutional arrangements between the film society and the said educational institution(s). Such filling up of the stands is artificial and might not be sustainable in the long term.

Some FSB members from Ravenshaw University at Cuttack have been able to start a film society at their institution, called Film Society of Ravenshaw (FSR), which has been holding regular screenings over the last two years.

Abhishek Parija, a film studies student and an alumnus of Ravenshaw who was a key mover in starting FSR says, ‘getting started with the film society in Ravenshaw and running it has been an administrative nightmare. Now that it has started, whatever little practice there has been with regard to FSR has been immensely informed by my FSB experiences.’

But no other educational institution in the Cuttack-Bhubaneswar urban region has a functional film society. Even the BPFTIO, despite being a training institute in cinema does not have one. In spite of  these factors, the 2020 edition of IFFB had a large number of younger viewers coming for the screenings.

There was a special section on students’ films on all the four days of the festival, culminating in an awards ceremony. This year both the award winning student films - ‘Wet Blue Tarpaulin’ by Anunay Barbhuiya and ‘Bhumigat’ by Pradyatan Bera - were from FTII, Pune. Bera felt, ‘the curation was well etched. The student film category is always special, as one gets to make films without much external pressure, which helps in developing new forms.’ But he also wanted the category to be expanded to include short, formally experimental and independent films.

The Case of Missing Odia Films

IFFB 2020 also screened ‘Bhija Matira Swarga’ (winner of the Odisha State Awards in 2019), as a tribute to its director, late Odia film-maker Manmohan Mohapatra (1951 – 2020). But there weren’t any other Odia films at the festival. As actor Dipanwit Dashmohapatra says, ‘I would love to see an Odia film section in the festival. This time there was only a single Odia film on the list. I would love to see that number increasing in future.’

With the increasing interface with a younger audience and the popularity of the students’ film section, one can only hope that FSB and IFFB are able to become a part of an ecosystem that helps a new crop of independent Odia film-makers to emerge.