Friendship Day Special: 10 Movies You Should Watch With Your Gang

In movies, the emotion of friendship has been revered since the dawn of time. Some famous friendship connections have been featured in movies, from Jai-Veeru to Bunny-Naina, that appear incomplete without the other. 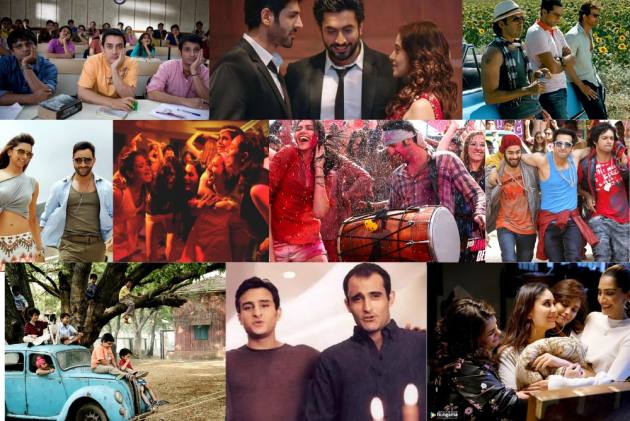 As Friendship Day comes, we all need some beautiful, profound, and life-changing films about friendship to compensate for the fact that our dear pals are still a "social distance" away. As an adult, you learn that maintaining friendships takes time and effort, but you also understand how crucial it is to maintain a relationship with the significant people in your life. According to current studies, having close friends reduces stress, keeps you sharp, and helps you live longer!

The journey of Rancho, Raju, and Farhan is both heart-breaking and humorous, and we can't stop ourselves from watching it over and over. Their connection captures our hearts with its simplicity, reminding us of our college pals and that one oddball friend who always dared to think outside the box.

The three best buddies. They have a bet to fulfil, as well as an old obligation to maintain. Which is to execute three terrifying stunts on a holiday together, as suggested by each. "Will we be together until death do us part?" Well…? In certain ways, yes. The film is, without a doubt, a hard-core male-bonding 'bromance.'

This movie is like a breath of fresh air. Does film after 2 decades of it release still hold up as one of the greatest bromances? Everybody hurts and, sometimes, everybody cries. Everybody also loves. If you believe it, you'll understand why Dil Chahta Hai exists.

A group of seven pals converse, laugh, fight, sob, party, share secrets, and create new equations while hanging out together. So, what makes it so special? These pals are actually seven Indian girls who have come together to fight with life's hardships and to live. This is the rare ‘girl-buddies’ film from Bollywood.

Despite their differences, these three are wonderful friends who stay together until friendship gets complicated and love becomes challenging. Cocktail continue to teach us important lessons. It showed us that friendship sometimes necessitates sacrifice. You must put others over yourself and consider what would make your friend happy.

This is a small film with a tremendous heart, in which a kids gang outperforms the adult human species and a stray dog motivates you to be human. This movies straightaway gets you with the innocence and honesty between the kids and their purity of friendship which we haven’t experienced in a long time. A time before we knew words like social status and materialism.

Veere Di Wedding created a stir in the industry by deviating from the traditional formula of filming an all-female film. Veere Di Wedding is an 'unsanskaari' deviation from typical female films. The picture is packaged with a strong and impermeable bond between the actresses.

Our Bollywood friendship movies list continues with Sonu Ke Titu Ki Sweety. The film's tagline may be "Brother from another mother." The film featured the world's most famous love triangle: two guys with a female in the middle but with a twist. In this case, the other guy was trying to protect his pal. The film displays a variety of friendship characteristics, including trust, commitment, and, most importantly, love.

What do you have to say about this film? It adds colour to our otherwise monochrome lives. From the camerawork to the songs to the colourful script and acting, this film is a wonderful celebration of friendship and one of the best Bollywood friendship films ever made. Friendship values such as love, trust, forgiveness, and fun are all depicted in this film.

This movie will take you back to your college days. This is a story of 4 slacker boys full of crack-ups and their dream of becoming easy rich and enjoys campus life. This movie is a complete package with colleges girls and prom night to these guys messing everything up.

The list will always remain incomplete as there is no perfect definition of friendship and the film industry has always cherished the concept as it connects with and more people and thus creates a bigger buzz!