End Of An Eros

The twilight of Delhi's morning shows and a requiem for Jangpura's late, great, pleasure dome. Is this the end of cheap thrills in the capital?

Call me Homer-erotic, but my first sexual fantasies leapt straight out of the Iliad. I was just a kid, trying to escape the tedium of a safari in Sariska by burying my head in a book. There were no tigers anyway (so what else is new?) but young loins were stirring to the ancient adultery of Paris and Helen. What I learned on my Diwali vacation: cheap thrills lurk in Hellenic places. 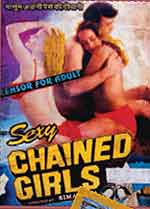 Decades later, this revelation returned when I explored the carnal delights of my new neighbourhood, Jangpura Extension: Om Dhaba and Eros cinema. Of course, only ‘Eros’ is Greek—Om is merely greasy—so it was at Eros (‘A-roj’ in the demotic) that I had my second epiphany with Helen. Our Helen—the one who launched a thousand hips. Eros was screening tax-free ‘morning shows’ of Kaam Shastra, an ‘educational film’ dredged up from the distributor’s vaults to compete with Kama Sutra showing at nearby Alankar. Mira Nair’s skanky film was advertising its censor cuts ("Reel III, deleted dialogue: ‘jaanch rahe hain’ spoken by Haresh Patel when he is putting his hand inside the blouse of a girl") But Kaam Shastra had an unexpurgated dialogue, spoken by Helen in a courtroom scene.

Before I knew it, I was an addict of morning show ads and listings, the peek-a-boo posters and their typographical eccentricities. "Size 42 now showing at Vishal", "Lady Chatterji’s Lover at Grandlay". The movies were only occasionally  ‘hot’ but each was a "sensation of the XXXth Film Festival". "A-Certificate—Adultrated". I saw Schlöndorff’s Swann in Love, Angelopoulos’s Beekeeper, Ken Russell’s kitsch classic The Lair of the White Worm (advertised as a Nagin flick: Snakewoman). And one day, at the wily Chanakya, I finally saw an ‘extra reel’—a two minute clip of coitus—interrupting a screening of The Cook, The Thief, His Wife and Her Lover. A hush fell over the hall. Young couples’ lips froze in mid-whisper. Even the rats beneath the seats stopped their skittering. 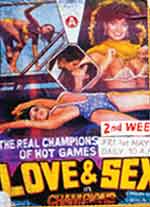 One day in 2003 they turned off the lights at Eros and closed the doors. The paanwala across the road says it will rise again as a multiplex mall. I just wish I’d woken up to morning shows a little earlier. The ‘Now Showing’ display has been painted over, effacing a palimpsest of posters from Her Nights to The Immaculate Conception and a complete set of the ‘Jawani’ series, all the way from Jawani Sola Saal Ki to Jawani Ki Talash: Jawani Jawan Ho Gayi!

Had I seen that last, highly educational, film in time it might have spared me the embarrassment of deciphering the telegram our cook Narayan placed in my naujawan hands many years ago.It carried news of his daughter, a termagant teenager. "SITA MATURED," it read. "Aap ki beti samajhdaar ho gayi," I translated in puzzlement. Then "...badi ho gayi?" His face lit up with comprehension and he laughed until his belly shook.

Well, that’s it. I’m all grown up myself, and Eros is dead. I’ve shot my wad, as they say. But I still have my fantasies. A recurrent one has me catching a Mag-lev autorickshaw back to a future Jangpura, where the new landmark is a Megalo-mall-cum-Om McDonalds foodcourtcum - Holocinemax. There’s a virtualised film retrospective I want to catch: ‘Helen: Mother of all Supervixens’. The theatre is not called Eros anymore but the new name retains the classical theme. "Oedipus," I tell the autowala. "Oedipus Complex." .