The government works towards eventual intention to meet WTO expectations. Pharma companies want more and a PIL filed in Karnataka High Court questions the soaring prices of life saving drugs. Who's to blame? 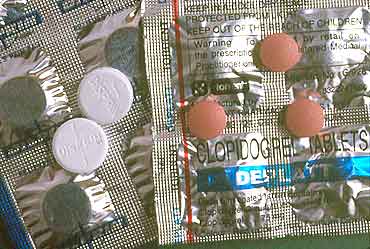 A year has gone by, but there has been little resolution on the drug policy that would dictate the final Drug Price Control Order (DPCO) which decides the fate of the drug and pharmaceutical industry.

Last year, the government introduced its drug policy. With an eventual intention to meet WTO expectations, it decided to reduce the number of drugs on the price control list bringing the number down to 38 items from 74. These items would account for 24 per cent of the industry's Rs 15,000 crore revenue. In addition were sops like a Rs-150 crore R&D budget that the government would disburse on case-to-case basis. The Maximum Allowable Post-Manufacturing Expense (MAPE) was to be upped from 45 % to 100%.

But the industry wants more:

What has happened since then is far from it. A PIL filed in the Karnataka High Court in November 2001 by two citizens asked for a stay on the DPCO. Reasons included an irrational procedure in finalizing the list. The High Court granted a stay on the order. The central government tried to get the stay vacated a few times but was unsuccessful. So it filed a special leave petition in January 2003 in the Supreme Court. As it stands now, the Court has asked the government to give a list of life-saving, essential drugs in consultation with the Health Ministry.

This Union Budget announced that the Bio-technology and pharmaceutical industry would be granted a status similar to the Information Technology sector for tax concessions. This was apart from routine reductions of excise duties and customs tariffs for a few essential drugs and concessions for R&D imports. But the industry is not impressed. Yogin Majmudar, President, Indian Drugs Manufacturer's Association (IDMA), a representative organization of 500 pharmaceutical companies says that this is not enough. "A resolution of issues only can assure a certainty of future investment", he argues.

Complete price de-control: All drugs that have sufficient number of competitors need no control, the industry claims. For example:  the drug Cotrimoxazole, manufactured by over 100 formulators is sold below the control price. Hocine Sidi Said, Managing Director, Pfizer Ltd, says " The pricing regime has only made inexpensive medicines available to those who can afford them and only works as a disincentive to venture into rural areas.

Increase in the MAPE to 125%: 48 per cent of the MAPE mark-up goes in trade margins. "After incurring costs like marketing, finance, administration and legal aid we are left with virtually nothing" says S.H. Israni, former President, IDMA.

Rationalisation of taxes: The manufacturers feel that government's calculation of manufacturing cost price is unfair. They allege that the government takes the lowest price of every input to calculate cost price. The MAPE mark-up is on this base. But IDMA argues that the lowest price supplied may account for poorer quality of inputs. This third price revision comes after a decade. This time costs, even at a nominal rate of 5 per cent per year, have gone up by over 50 per cent. These reasons are largely responsible for a third of all units in Andhra Pradesh, Maharashtra and Gujarat shutting down and foreign investment being reluctant to come even though the holding limit has been increased from 40 per cent to 100 per cent.

Rationalising cost price: Taxes on drugs add up to 35 per cent of MRP when in most countries it is between zero to ten per cent. Customs duties on imported bulk drugs range from 20 to 40 per cent in India even when the U.S. charges between 0 to 4 per cent and all of Europe and  U.K. charge nothing. To add to this woe, is the impending 12.5% VAT that will take prices up by six percent on an average. "Public health is all an eyewash", alleges Israni, "as the government has been increasing taxes every few years while pressurizing us to reduce costs". "We want a 4% tax on the whole and one per cent on life-saving drugs", says Majmudar.

But that's not how many see it. Organisations like the Medico Friend's Circle and CEHAT argue that the industry demands are unjustified. Dr Anant Phadke, who represents the Medico Friend's Circle in the 12-member All India Drug Action Network, argues for complete price control: "Arguments of consumer choice don't apply here because a patient cannot choose not to buy a drug. He is not even qualified to opt for another brand over what the doctor recommends. So when there is no price elasticity, then control is needed".

Phadke argues that 100 per cent MAPE is adequate which stands validated by Locost Standard Therapeutics (LST), a Baroda-based NGO that runs a tableting and capsuling unit and  manufacturing 75 essential drugs. Phadke is a trustee of LST which supplies drugs in bulk at a 10 per cent profit margin with manufacturing standards at par with the best in India. The price differential: LST's Diazepam, a sleeping pill, sells at 0.04 paise per tablet in bulk. "Our standards would be as good as Ranbaxy's which retails its brand Calmpose at Rs 0.90 per tablet", says Phadke.

LST's Albendazole, a drug  for de-worming sells at Re 1 per tablet. The private companies sell it in bulk for about Rs 3.50. Some brands like Noworm retail at Rs 10-12. Phadke agrees that the government should rationalise the process of arriving at the MAPE. "But the manufacturers too should rationalise the huge trade margins with the dealers instead of making the consumer pay more," he says.

Phadke doesn't buy the theory that market forces rationalise prices cut in the best interest of the consumer. This isn't like the FMCG or durables industry because two monopolies exist here:

a) five or fewer brands control several segments and

b) the drug industry itself has a monopoly because of inherent lack of choice for a patient who has to buy medication.

LST sells antibiotic Amoxycillin for Re 1 per capsule. Private players charge twice as much in bulk. It sells at Rs 3 in retail despite over 100 competitors. Similarly LST sells Paracetemol at the rate of Rs 0.15 for a tablet in bulk. So, in retail it could work out to Rs 0.30. Private brands retail at Rs 0.50-0.65. Prices in India may be the lowest in the world and the cost differential small in rupee terms but, as the activists say, volumes assure returns so manufacturers have no reasons to complain.

If units are shutting down it could be the industry evening out after a spate of proliferation. There are, after all over 40,000 registered brands made by over five thousand manufacturing units. A similar trend has been noticed in disparate industries like small-scale manufacturing units to advertising and finance. Israni too agrees that the proliferation hinders good competition and overall quality standards.

Phadke argues that the pharmaceutical industry has several ways and means of multiplying its profits. For one, there are unscientific drug combinations. A large proportion of drugs in India are combination drugs wherein the additions to a rational drug are unnecessary. The WHO list includes only 40 combinations drugs and 260 single ingredient drugs. But in India, 3000- 5000 irrational drug combinations encompassing close to 30,000 brands are sold.

The brands you know best feature here as culprits. "For instance", says Phadke, "Aspro contains Aspirin and caffeine. But caffeine is unnecessary". So while LST sells Aspirin for Rs 8 for 100 tablets in bulk, Aspro retails at Rs 0.15 per tablet. Phadke says that brands like Vicks Vaporub or Rubex have just one useful ingredient, Menthol, that helps to relieve congestion temporarily in a nose block. Others like camphor, eucalyptus and nutmeg are useless from an allopathic point of view. But didn't some of these products go Ayurvedic? According to Phadke, it's because there aren't any taxes on Ayurvedic products. "You add drugs and increase profits dramatically", says Phadke. The AIDAN headed by Mira Shiva strongly proposes that only 40 prescribed drug combinations should be allowed.

Doctors too have a limited choice at most times. For instance, to increase your blood you need only iron with folic acid. But not a single brand available in the market offers just that. A few unnecessary Vitamins are thrown in for which you have to pay no matter which brand you buy. All textbooks and WHO documents talk in terms of generic names. All doctors study these generic names. AIDAN argues that it is only fair to announce a generic drug on the label with the brand name in brackets instead of confusing the consumer.

The activists find the manufacturers alarmists when they talk of the beginning of the end. Leading drug companies have among the highest profits and share prices. Ravi Duggal, Co-ordiantor, CEHAT points out that prices have increased up to three times in the past few years. Though in keeping with the consumer price index, it impacts the poor users of public health services. Duggal warns that we could end up like several other developing countries who don't have price controls. This has left them with no authority over MNCs who harvest large profits.

In the midst of such an uproar, the government could find the best reason to study the impact of complying to the WTO's demands. The delay caused by the PIL may actually be a boon. A good look at the issues by the Supreme Court  may actually help resolve matters in the favour of the consumer and the country at large.