The only movement in the barbaric case, consigned to perpetual limbo, seems to be that of the ISI handling officer of Omar Sheikh - who's being sought to be protected and rewarded with an ambassadorial appointment. 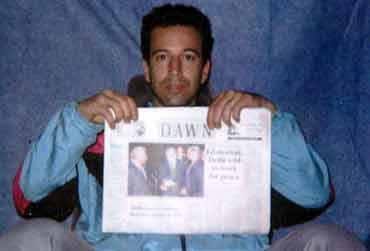 The case relating to the kidnapping and murder of Daniel Pearl, the US journalist, in the beginning of last year, continues to be in a limbo, with no action by the government of Gen.Pervez Musharraf to have the hearing on the appeal filed by the accused expedited.

On July 15, 2002, a special anti-terrorism court of Hyderabad, Sindh, had found guilty Ahmed Omar Sheikh, Syed Salman Saquib, Sheikh Muhammad Adil and Fahad Naseem of the kidnapping and murder of Pearl. While Omar Sheikh was sentenced to death, the other three were sentenced to life imprisonment. Shortly thereafter, they had appealed against the sentence before a division bench of the Sindh High Court.

Though it is now a year since the appeal was filed, there has been no progress in the hearing of the appeal. The defence lawyers have been repeatedly absenting themselves from the court, which has already adjourned the hearing six times on the ground that the defence lawyers were absent. The sixth adjournment was granted on September 25, 2003. The case has now been fixed for hearing on October 21.

The court warned that if the defence lawyers do not appear on that date too, it would dispense with their services and appoint a government lawyer to defend the accused.

Pakistan's Anti-Terrorism Act, which has been repeatedly amended by successive governments to ensure expeditious disposal of the trial and the appeal in terrorism-related cases, contains adequate provisions for preventing such repeated adjournments and other means for delaying the trial.

When Musharraf had former Prime Minister Nawaz Sharif prosecuted under the Anti-Terrorism Act, the prosecution under his instructions ensured that the trial was disposed off and Nawaz Sharif convicted within the time-limits laid down by the Act. In the case relating to the murder of Pearl, the prosecution itself has been colluding with the defence lawyers and has refrained from moving the court to stop the delaying tactics repeatedly adopted by the defence lawyers.

In the meanwhile, Brig (retd) Ejaz Shah, Home Secretary of Punjab, before whom Omar Sheikh had surrendered in February last year, has reportedly been selected by Musharraf for posting as Pakistan's Ambassador to Indonesia. Before joining as Home Secretary, Punjab, he was working in the ISI and used to be the principal handling officer of Omar Sheikh and one of the handling officers of Osama bin Laden and Mullah Omar.

When the Lahore and Karachi Police started searching for Omar Sheikh after the kidnapping of Pearl, he surrendered to Ejaz Shah as he was afraid that the Karachi Police might torture him. Ejaz Shah immediately informed Gen. Mohammad Aziz Khan, presently Chairman, Joint Chiefs of Staff Committee, who was No. 2 in the ISI till October 1998, and the two carefully debriefed Omar Sheikh as to what he should tell the Police during his interrogation. He was kept in their informal custody for a week and, thereafter, handed over to the Police, who were told to announce that they had arrested him while searching for him without mentioning that he had voluntarily surrendered to Shah.

Aziz and Shah did not want Omar Sheikh to admit to the Karachi Police about his role in the explosion outside the Legislative Assembly of Jammu & Kashmir in October,2001, in the attack on the Indian Parliament House in December,2001, and about his having told Lt.Gen.Ehsanul Haq, the present DG, ISI, who was Corps Commander in Peshawar before October,2001, about the plans of Al Qaeda to carry out terrorist strikes in the USA.

Omar Sheikh disregarded their advice and told the Karachi Police about it. The News, the prestigious daily, came to know of some of his confessions to the Karachi Police. The Editor of the paper rejected a request from the ISI not to publish the story. Musharraf, thereupon, forced the owner to sack the Editor, who went into exile in the US fearing a threat to his life from the ISI.

Thereafter, Musharraf selected Shah for posting as High Commissioner to Australia, which reportedly refused to give its agreement to his appointment. It is now learnt that Musharraf has instructed his Foreign Office that he should be sent as Ambassador to Indonesia. It remains to be seen whether Jakarta agrees to it.

If it does, this will be the fourth instance in recent years of ex-ISI officers being appointed to head the Pakistani diplomatic missions in this region. The other three missions are those at Pyongyang, North Korea, which has always been headed by an ISI officer who had worked in the division responsible for the clandestine procurement of nuclear materials and missiles, Kuala Lumpur, which is the nerve centre for supervising the activities of the Tablighi Jamaat in the South-East Asian region, Australia and New Zealand, and Bangkok, which is a transit point for the infiltration of ISI-trained terrorists into India by air.

'We Shall Not Negotiate With Terrorism'