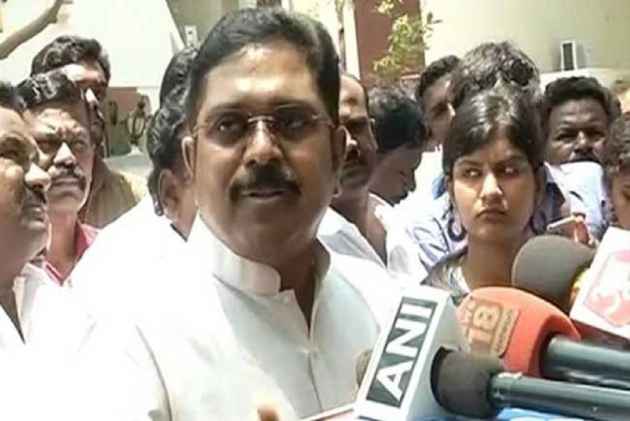 "I want a CBI probe," was his reply when asked if the party faction led by him was ready to cooperate with the government-constituted Justice A Arumughaswamy Commission of Inquiry to probe the death of Jayalalithaa on December 5, 2016.

"Only when there is a CBI probe, can the ministers, who are making contradictory remarks (on meeting Jayalalithaa when she was hospitalised), be questioned," he said.

Tamil Nadu Forest Minister Dindigul C Srinivasan had recently said nobody had met the former AIADMK supremo after she was admitted to the Apollo Hospital last year and that they "lied" that she ate idly, among others, out of fear of her close aide and now party chief V K Sasikala.

However, Cooperation Minister Sellur Raju had contradicted Srinivasan saying, "All the ministers had met her."

On September 25, the Tamil Nadu government constituted an inquiry commission headed by Justice A Arumughaswamy to look into the circumstances leading up to the death of the former chief minister.

Initiating such a probe was a key pre-condition of former rebel AIADMK leader and now Tamil Nadu Deputy Chief Minister O Panneerselvam for merging the party faction led by him with the one led by chief minister E K Palaniswami.

The two factions had merged on August 21.

Dhinakaran accused the state government of trying to use "the doubts over Amma's (Jayalalithaa) death" to "divert" the attention from its misgovernance.

"To divert the people's attention from the misgovernance, doubts are being raised over Amma's death," he said, adding that the Palaniswami government would be sent home soon.

Palaniswami and Dhinakaran are engaged in a tussle for power, with the latter accusing the chief minister of "betraying" Sasikala, who had nominated him to the top party post in February, following a revolt by Panneerselvam.

Dhinakaran asserted that the disqualification of the 18 AIADMK MLAs loyal to him from the state Assembly was only "temporary" and vowed to take legal recourse and "send this government home and once again usher in Amma's rule".

He also lashed out at the government on the spread of dengue, saying "their words and action show they are only bothered about the government. We can't expect any action from them".

On the appointment of Banwarilal Purohit as the Governor of Tamil Nadu, Dhinakaran said, "We expect at least the new governor to work in a non-partisan manner."

Earlier, Dhinakaran had met former governor Ch Vidyasagar Rao and sought for the removal of Palaniswami from the post of chief minister.

In August, 19 MLAs supporting Dhinakaran had met Rao and pressed for a similar demand, saying they had lost confidence in the chief minister.

However, one of those MLAs subsequently switched over to the Palaniswami camp.