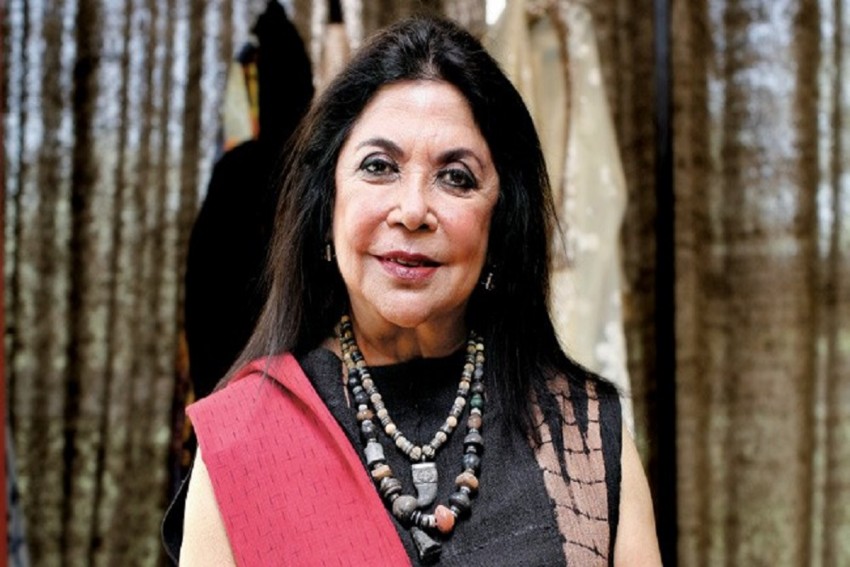 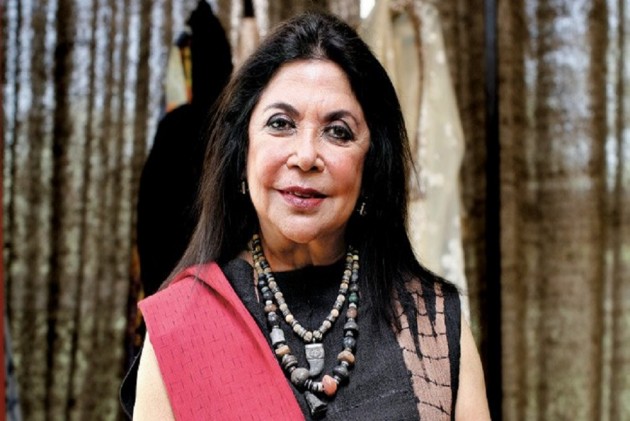 Designer Ritu Kumar has been a champion of hand weaves and hand block printing. In an interview with Outlook, she  talks at length about the shift of clothing in Independent India and the strong bond that Indian fashion industry shares with Bollywood.

After Independence, Indians saw a shift in clothing, and there was a lot of western influence too in our everyday clothing. How was that reflected on screen and on stage?

In India, in the 1950s, there were no high street or retail stores which sold western clothing. Immediately after independence, there was no import of western clothes because import of most things was banned. There was a vacuum because the indigenous clothes as well as Indian textiles were not available in India as they had been taxed so heavily by the British, that the craftsmen could not continue their trade. This was done with a purpose — Indian designs had been copied by the mills in Lancashire and produced there, to be sent back to the lucrative Indian market for sale.

During that time, I was in my twenties when I started off, I had to do a lot of field work trying to revive the old artworks and weaves that were killed during the colonial era. What you saw in vogue at that time was actor Madhubala on screen wearing chiffon saris from France with Benarasi borders stitched on them. The men, of course, wore formal suits like the British because of strong colonial influence.   Then came an era when the fashion was influenced by social reformer Kamladevi Chattopadhay. We were all part of the movement of reviving. We went from village to village for resourcing all the wonderful textiles that India used to produce. India was the biggest exporter of textile in the world and from there it became the biggest importer of English textile in the world. There was a lot of effort that went into the remake of the patola saris, the paithanis, the badhnis and the benarasis. At that time, the designers were strong revivors of the traditional weaves. Then, the Festival of India happened and the Vishwakarma exhibition happened which re-instated that India had in her own textile.

The Festivals of India were held all over the world and I researched about textiles from all over the country which became hugely successful in India and the world. Since we were the revivers of the Indian weaves, we always wore authentic India weaves and the saris too made a huge comeback. During our University years, we wore khadi kurtas, salwars, jholas and kholapuri chappals and it was the anti-affluent look that we were following. Today, we have a very strong, parallel indigenous fashion and we retain an extremely strong textile handwriting.

When and how did the fashion industry, closely tied to the entertainment industry, emerge?

Indian fashion has always been tied to the entertainment industry. Influence of films is enormous, and the films range from period dramas to modern takes on what people wear in India and what people wear in corporate India. Indian movies have a much wider reach compared to yesteryears. And with the advent of social media, the influence of filmy fashion has reached the lanes and by-lanes of India.

How did modern, secular Indians strike a balance between tradition and modernity through their clothes and fashion choices, both on screen and off screen?

Films and theatre reflect both western and Indian influence. There are movies where women are seen wearing saris for weddings, and then there also are women wearing a little black dress. Now we see the evolution of the Indian kind of fashion styling that has come up- like the dhoti salwar and kurtis, the layered asymmetrical kurtas, the big shararas and all of these are innovations that have happened off late and this is fuelled by the great demand for ‘occasion clothes’. We have a very strong parallel indigenous fashion and entertainment is like an amalgamation of the Indian and the western influence.

What role did fashion play in establishing the identity of the Indian that the architects of our nation had imagined? From cotton to polyester, did the popularity of certain fabrics coming into the market post-Independence influence the image of what the Indian wore?

At one time, Indians only wore a woven sari. But then the weaving stopped in India which left a huge vacuum in the textile industry. Now, in the last few years, saris have made a huge comeback. And saris in Indian weaves have made a very sophisticated market for themselves. Urban women today take pride in wearing Indian handloom. And again, there are very few who can afford the handloom. Hence there are a group of people who are shifting to polyester because it drapes better and it is easy to handle. To pull off a handloom sari one needs to know how to drape it well and ironing and maintaining the crisp look is a little difficult. Hence people like the convenience of the polyester sari.

I remember, when I started my work in hand-block printing, I was researching in old booties and jamawar borders, which Indians really had not seen for a very long time and all the traditional motifs which people were at one point of time used to. These motifs disappeared for almost a hundred years and gradually they made a comeback with our hard work and research. The mills in Surat had the polyesters and they were cheap and they would print these saris with fabulous motifs and lovely colours which the Indians liked. They were inexpensive and became popular.

What role did fashion play in reviving our Indian weaves like khadi, kalamkari, ikkat etc?

When I started off, I was lost in a desert and there was absolutely nothing. Many of us went to the field and came back with these fabulous pieces of Indian weaves and the government encouraged it. I am happy that our generation and even the present generation is understands and appreciates the beauty of our precious traditional weaves.