Modern-age Delhi has for a while been getting enriched with visual arts. Of late, the city got an array of frescos and sculptures along the just-opened Delhi-Meerut Expressway. A view at them in focus, along with some of the new and old artworks in the national capital

The past four years of an arterial Delhi road had painted dirty images of it being dug up across the Yamuna, but now the scene has dramatically brightened up. Just as the public has begun enjoying the sparkling Expressway linking the national capital more efficiently with Meerut, there is a streak of visual art too accompanying the traveller to western Uttar Pradesh. The 96-km road today features a remarkable line-up of frescos and sculptures along its starting tract that cuts the river which waters the cereal and vegetable fields on either side. 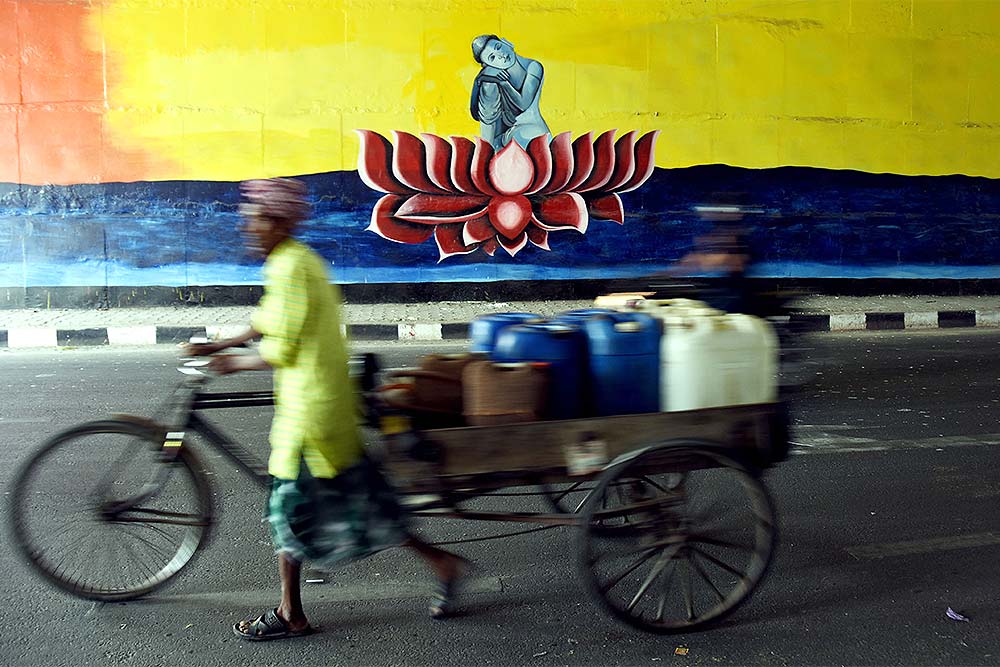 A wistful Buddha, as if gazing at the travails of a cart-puller

In any case, contemporary art has not been anyway alien or new to the city. Delhi has, since the country’s independence, seen sustained beautification, which has picked up momentum by the turn of the present century. To give a small throwback, for instance, the landmark Gyaraj Murti statues near President’s Estate downtown was built in the second half of last century, symbolically representing the 1931 salt march Mahatma Gandhi undertook to Dandi as part of the freedom struggle he led successfully. 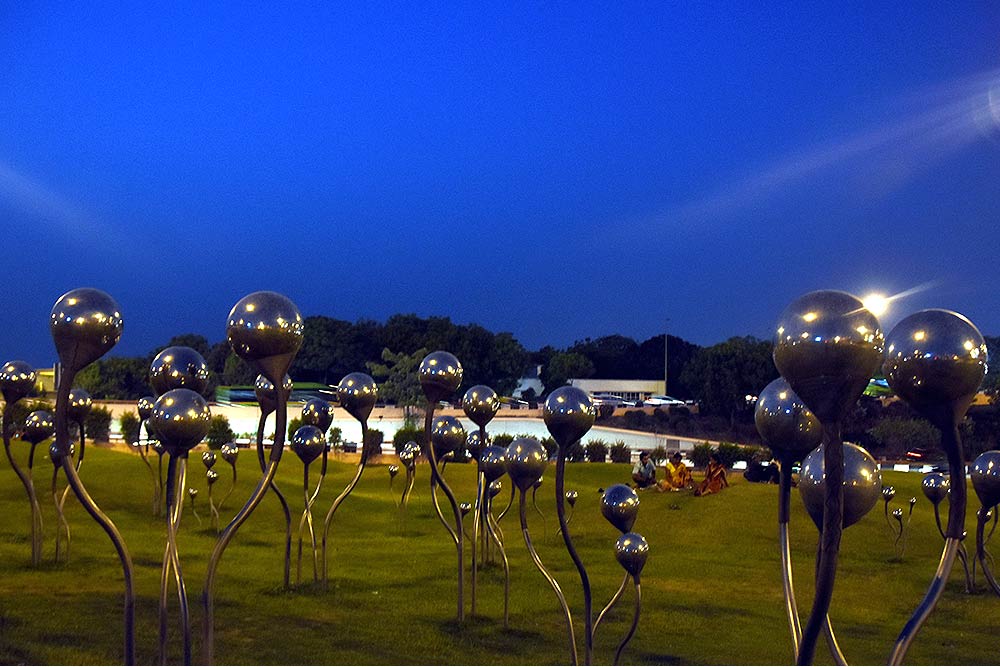 The steel sprouts in the park surrounded by the AIIMS flyover. Installed by a steel company, many a Delhi commuter is familiar with the shiny metal globules.

Into this decade, east Delhi’s Sarai Kale Khan has another sculpture bearing the spirit of the apostle of peace. A fresh work—on three monkeys, giving out tacit messages of see no evil, speak no evil, hear no evil—is up now with a subtle twist to its looks below a flyover adjoining Nizamuddin railway station. This, not very far from the installation art of sprouts in steel that have come up on the undulating six-acre meadows around the busy network of AIIMS flyovers. Further southward is Jawaharlal Nehru University, which has its rugged and sprawling campus, entertaining new-age art. 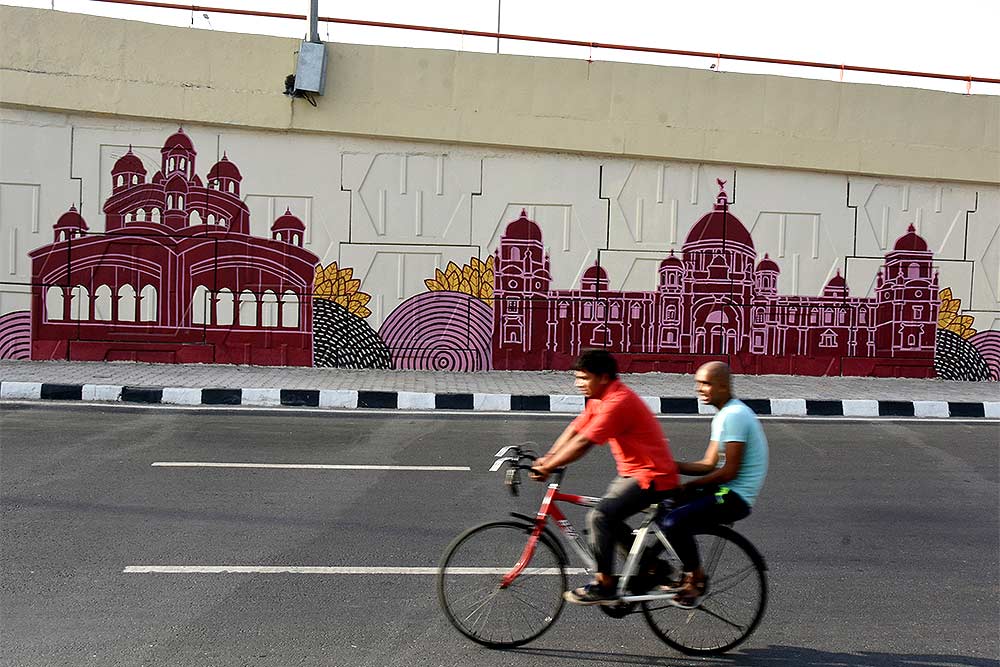 Further afield, in Mehrauli, if Qutub Minar has arguably been Delhi’s defining heritage monument, a miniature of the 240-foot-tall medieval tower has lately found a place along the brand-new Delhi-Meerut Expressway. Not far from it down the 14-lane road is a replica of the historical Ashok Stambha featuring four lions standing back to back and facing as many sides. The Rs 7,800-crore expressway, which was inaugurated in end-May, also has smooth ups and downs, lending themselves to wall art sideways. Among them are images of Delhi’s most popular structures, besides of religious figures known for their message of love and universal brotherhood. 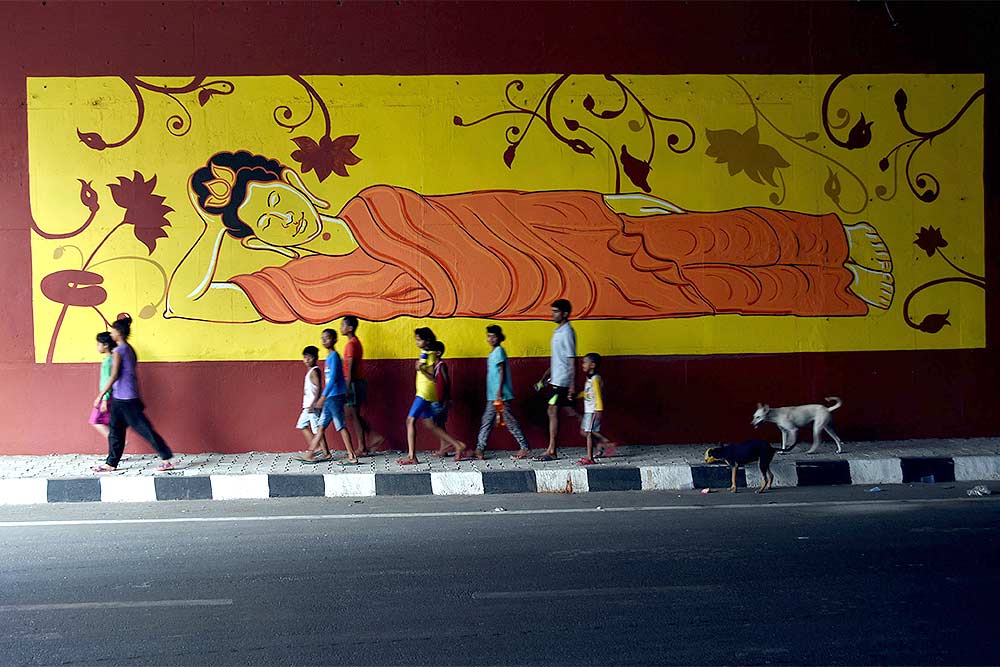 In Vinod Nagar, not far from Patparganj, another Buddha wall art

Overall, in the peak of summer this time, the eastern part of Delhi has particularly become festive with profuse works of art of various kinds, much to the joy and curiosity of the passers-by.