Those who are violating every injunction of Islam have the gall to call themselves with names such as "Lashkar-e-Toiba" (Holy Army) and "Jaish-e-Mohammad" (the Army of Mohammad). All important Muslim leaders have condemned this heinous crime against 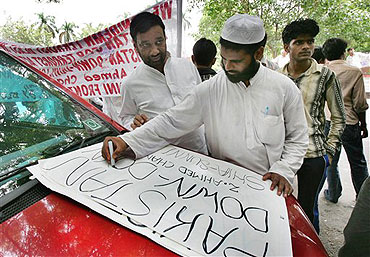 It was indeed terrible Tuesday (11/7/06) when innocent commuters going back home after a hard day's work were targeted with bomb blasts from Matunga to Bhayandar on western suburban trains in Mumbai. So far the death toll is more than 200 and about 700 people injured, many of them quite severely. No words are enough to condemn such horrible crime against humanity. No one who has even elementary sense of being human will commit such a dastardly act.

Earlier, the same day, in the morning, eight persons lost their lives in Srinagar, five of them tourists from West Bengal. Grenades were thrown at the tourist bus proceeding towards Pahalgam. Why these killings? Who is behind it? Earlier violence was mostly confined to Kashmir valley. Now this has spread to various cities of north India -- Delhi, Varanasi, Ayodhya and Mumbai. Mumbai witnessed such horrifying bomb blasts the second time, the first time was in March 1993 in which more than 250 innocent people had lost their lives.

Some people think, as many Kashmiris thought in 1989, that violence is the only way out and if they take to guns, azadi would be near at hand. Now, after losing 80,000 lives, they have realised what repercussions violence brings about. 'Azadi' is as far away as it ever was for Kashmiris and all they have gained is violence and more violence. Peace now is as elusive as azadi itself.

We can very well realise the wisdom of Gandhiji's insistence on non-violence for attaining freedom for India from clutches of British imperialism. No one believed Gandhiji when he talked of achieving India's freedom through non-violence. Even Churchill, the then Prime Minister of Britain, talked of Gandhiji with scorn and said what this 'naked faqir' could do to the mighty British empire, on which even the sun never set.

Interestingly, Gandhiji's concept comes very close to the Qur'anic teaching of truth and patience (haq and sabr) as enshrined in chapter 103. It is great shame that the so called 'jihadis are committing such dastardly acts of violence in the name of Islam. Nothing can be more un-Islamic than these horrifying inhuman acts. This game is being played for power and pelf by a section of Pakistani army. These terrorists cannot carry on such powerful blasts without the support of ISI of Pakistan. Lashkar-e-Toiba, which is suspected to be behind such acts, cannot sustain itself without active help from ISI. Though Lashkar-e-Toiba has denied responsibility for these serial blasts on Tuesday, and the police too has not reached any decisive conclusion, yet all available indications point in that direction.

Nawaz Sharif, the former Prime Minister of Pakistan has said in his recently published biography that ISI is not under government control and has been trying to destabilise India and Bangla Desh. He is certainly in know of things in Pakistan and what he says cannot be lightly dismissed.

It is such a matter of shame that Pakistan, which claims to be an Islamic state, is bringing shame and disgrace to Islam. No other Islamic country is home to so many terrorists as Pakistan is. Pakistan also has become a front state for all American designs, which further fuels violence and creates more terrorists. In fact, if Pakistan were true to Islam then it should have been a haven of peace. The prophet of Islam made peace central to Islamic teachings.

He accepted the peace treaty of Hudaibiyah, which was thought to be humiliating by most of his close companions and yet the Prophet (PBUH) insisted on accepting the treaty as it led to establishing peace. What could be a better or noble example than this? But these terrorists feel no pang of conscience in killing innocent citizens. Even according to the rules of Shari'ah, non-combatants cannot be killed. These rules are precursors to the Geneva Agreement, which was drawn up hundreds of years after these Shari'ah rules.

However, it is these Muslims who are openly defying these Shari'ah rules in the name of Islam. What could be more condemnable? Also how can one invoke jihad in the name of Kashmir? Jihad is not meant for conquering territory, it is for defending oneself, if attacked, and for controlling one's evil desires. The Qur'an specifically prohibits any war of aggression. It clearly says, "Fight in the way of Allah those who fight you. Do not commit aggression; Allah does not love aggressors." (2:190)

In throwing bombs and killing innocent people, these Muslims are doubly guilty: they are showing aggression against those who are not aggressors, and, over and above that, they are killing non-combatants. Thus they are violating every injunction of Islam and yet, ironically, in the name of Islam, they have named their armed groups as "Lashkar-e-Toiba " (Holy Army) and "Jaish-e-Mohammad" (the Army of Mohammad, peace be upon him). How can an army which kills innocent people be a holy army or army of Holy Prophet? Those who commit such inhuman deeds can never deserve to be called, as they call themselves, holy army or army of Mohammad (PBUH).

And as for jihad, it has never been used in the sense of war in the Qur'an. There are other words like qital and harb for war. The Prophet (PBUH), when asked what is jihad, is reported to have said that the best form of jihad is speaking truth in the face of a tyrannical ruler. But here the so called jihadis themselves are tyrannical and it is required to speak the plain truth about them. They need to be told that what they are doing is tyranny against innocent people.

It is such dastardly acts which have brought a bad name to Islam in the popular imagination. We claim that Islam is a religion of peace but such acts convince people that Islam has nothing to do with peace, but with violence and terrorism. It is in fact the duty of Muslims to project themselves as a model for peaceful behaviour. We cannot expect common people to discern and discriminate between handful of aggressors and large mass of Muslims living in peace with others and sticking to the Islamic teaching of peace.

It is believed that one of the intentions of such killings of innocent people is to start communal violence in India. They carried out bomb-blasts in Ayodhya, in a temple in Varanasi and earlier in a market place in Delhi last October. But the people of India are mature enough not to fall prey to such dirty games. When a blast was carried out at a temple in Varanasi, it was feared that it would trigger off communal riots. But not only Muslim leaders and intellectuals, but also the chief mufti of Varanasi issued a fatwa decrying that attack on the temple, quoting the Qur'anic verse that to kill one innocent human being amounts to killing the whole humanity (5:32).

The chief mufti and chief priest of the temple in Varanasi came together and expressed solidarity, thus completely frustrating the designs of those who wanted to ignite Hindu-Muslim riots. When a blast was carried out at Ayodhya, it was feared in the same way that it might trigger-off violence between Hindus and Muslims, yet nothing happened. We must salute the maturity of Indian people.

This time around also all important Muslim leaders have condemned this cowardly attack on innocent people. Jamiat-i-Ulama-i-Hind, Muslim League, Jamat-e-Islami-Hind, all of them spared no words in condemning this heinous crime against humanity. No sane person will ever condone such ghastly killings. The Hindus and Muslims in Mumbai rose to the occasion and helped all those who were injured and helped in taking dead bodies to hospitals.

It seems India will have to live with such attacks for sometime to come. It is, therefore, necessary to be ever alert. What happened on terrible Tuesday is also partly an intelligence failure. Though it is very difficult to predict when and where terrorists will choose to attack, it becomes all the more necessary to be very very alert. It is the duty of the government of India to protect the lives of people against such attacks.

People themselves were, it appears, more prepared than the authorities. Such major disasters --  man-made or natural -- are bound to take place time and again and so the government should work in all seriousness to evolve a disaster management plan.

Courtesy, The Centre for Study of Society and Secularism

What's Next After Mumbai?