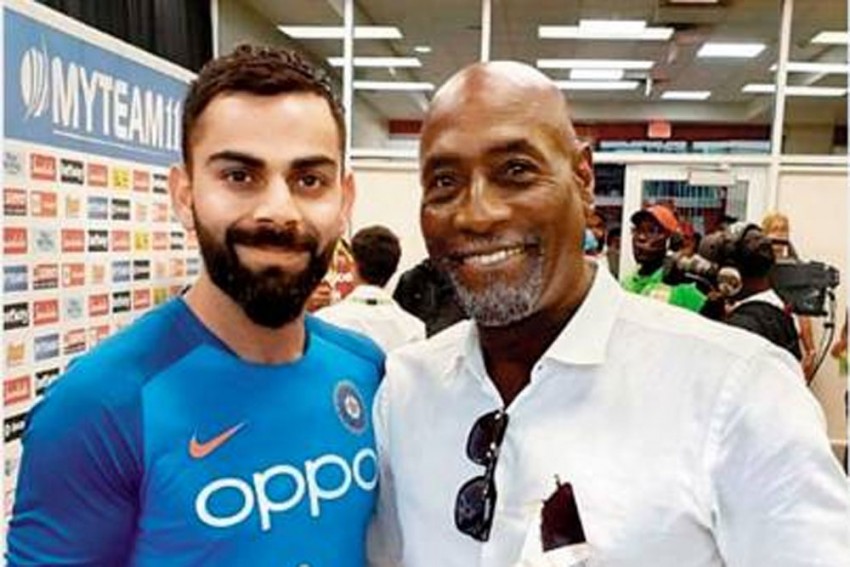 India skipper Virat Kohli with Sir Vivian Richards who has criticised all those who have been making a hue and cry over the turning tracks.
File Photo
Outlook Web Bureau 2021-03-01T12:27:07+05:30 Sir Vivian Richards Asks Everyone To Stop 'Moaning And Groaning' Over Spin-Friendly Motera Wicket

Ever since the 2nd Test between India and England in Chennai, followed by the two-day day-night Test in Ahmedabad, pitch has been the focus of a raging debate in the cricketing world. (More Cricket News)

Sir Vivian Richards is the latest to jump into the debate criticising all those who have been making a hue and cry over the turning tracks.

Richards said that the moaning and groaning has to stop, and also the perception about the pitch needing to seam-friendly for Tests needs to change.

"I've been asked questions recently about the Test match that was played in India… the second and third Test match against England. And I am a little confused about the question really because there seems to be a lot of moaning and groaning about the wicket that they were playing on," Richards said in a video posted on his Facebook page.

He further added, “I just felt that the ones who are moaning, in my opinion, should realise that there are times that you're going to get a seaming track, a ball that is basically jumping off a good length and everyone thinks that's a problem for batters. There are times batters sometimes cope with that. India spinners led-by Ravichandran Ashwin exploited England’s weakness against spin to the hilt, bundling the visitors twice for 112 and 81.

Richards said that wickets in India are no surprise and English batsmen should have come prepared.

"But now you've seen the other side, and this is why I think it was given the name Test match cricket, because of the test of the mind and will and everything else that goes with it when you're competing.”

The West Indies great added, “And the complaints have been that the wicket is spinning too much and all that sorts of stuff. This is another side of the coin guys. People seem to forget that if you're going to India, you should expect that. You are going to spin land. You should basically prepare yourself to know what you're going to encounter," he said.