Today is Father’s Day. If open admiration from the son is a happy feature on the concert stage, then two scions of Indian classical music hold great examples. 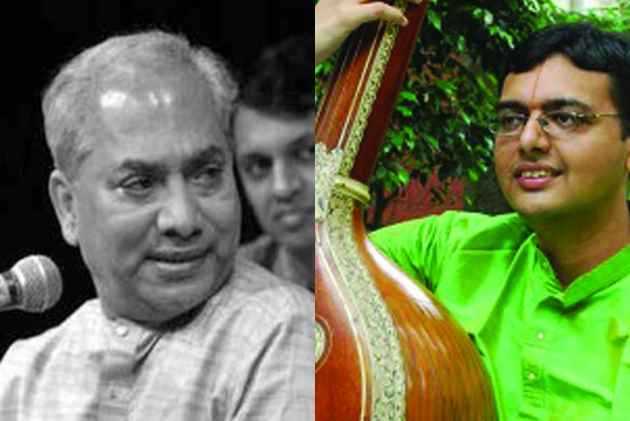 Into the early days of this millennium, T.N. Seshagopalan held a night-long concert in the city of Chennai where he had made it big as a Carnatic musician. Among his accompanists at the historic 12-hour performance on a roadside venue of the down-country metropolis was a teenager, who kept impulsively shaking his head in an uncensored show of admiration for the main artiste’s vocals. Not many in the crowd those days knew the boy was Seshagopalan’s son, T.N.S. Krishna.

Diagonally opposite the peninsula’s geography and slightly up of the Deccan, Mumbai by the Arabian Sea has had its equally venerated master called Pt C.R. Vyas. Behind the Hindustani icon, a bit sideways, would be sitting his junior by the name of Suhas Vyas—holding the tanpura, virtually happy in conceding ‘defeat’ while following the forays the lead musician would belt out as a 75-year-old.

Today, Suhas Vyas is himself close to becoming a septuagenarian. And is much noticed for upholding the conventional aesthetics of his classical form—a trait that is noticed in young Krishna, too, in the Carnatic circles. Together they stand as two of the country’s classical musicians who tend to believe that they own every bit of their art to their father, also their guru.

Which is what this write-up is about on Father’s Day, which comes on the third Sunday of June, giving people of the world’s 40-plus countries, including India, an occasion to particularly celebrate paternal bond.

Suhas and Krishna have had been natural beneficiaries of the age-old gurukula system, as their music tutor has been none other than the father. Yet that is not what seemingly defines or limits their attitude towards the parent. Each time they assist (or sang with, as the word should be for Suhas, given that Pt C.R. Vyas died in 2002) their father on the stage, the audience got vibes of the deep affiliation between the two members of the household. From the array of expressions it triggered, they hinted at a grand chemistry much beyond the world of music.

The 1949-born Suhas took to learning Hindustani at a very early age, but no way says the classical art was thrust upon him by Pt C.R. Vyas—an exponent of three music schools: Agra, Kirana and Gwalior. The ambience at home—his father hailed from Maharashtra’s culturally-rich Osmanabad—did help him mould as a vocalist. Their house used to be a place where quite a few towering figures in the field would frequent, some of them being Kumar Gandharva, Bhimsen Joshi, K.G. Ginde, Jitendra Abhisheki and S.C.R. Bhat, Suhas recalls, as per a four-year-old interview to a publication.

Among the numerous things that he has absorbed from his father, the one which Suhas Vyas adheres to strictly is that music has its own reward and one should remain honest and dedicated to art, he tells the Indian Express. “I have been fortunate enough to witness him teach many of his students. Today, I try in my own humble way, to teach students from a younger generation. Of course, technology had not seeped in during my father’s time, but I make optimum usage of technology and teach students abroad through video software,” he adds in that one-on-one in November 2014.

Around that time, in the Tamil Nadu capital, Krishna, now into his mid-30s, is seen interacting with the media. It’s with a national daily, which is keen to know about Seshagopalan’s parallel career in Harikatha, a music-laden discourse stemming from Purana stories. It’s an art-form that developed along Coastal Andhra region in the early 19th century, which the senior Carnatic master has been popularising in his part of the country.

“Father’s schooling in the temple city of Madurai, gave him an exposure to different art forms of music,” Krishna tells The Times of India in a September 2014 interaction. “Harikatha itself is anchored around music with violin and mridangam performers being part of the act.”

Chennai-raised Krishna may have missed the rusticity around the village his father spent his formative years starting the late 1940s. Yet the young vocalist has been keen to assimilate the eclecticism of his father in as many ways as he can all these years. If Seshagopalan, who is set to turn 70 in less than four months from now, has himself been an ocean of music enriched by several broad, long, thin and small rivers of inspiring notes, Krishna keeps assisting the father till date even while having gained name as a solo vocalist.

At half of Suhas’s age now, Krishna continues to remind audiences about the former’s adulation for one’s father.