"It is very dangerous in the 21st century to exclude people," Rahul said. 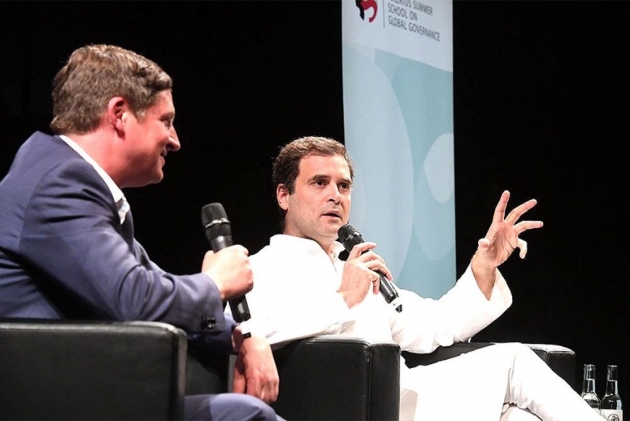 Rahul Gandhi cited the example of terror group ISIS while saying that exclusion of a large number of people from the development process could lead to the creation of insurgent groups anywhere in the world.

Addressing a gathering at the Bucerius Summer School in Hamburg in Germany, Gandhi said the BJP government has excluded tribals, Dalits and minorities from the development narrative and "this could be a dangerous thing".

"It is very dangerous in the 21st century to exclude people," he said.

"If you don't give people a vision in the 21st century, somebody else will. And that's the real risk of excluding a large number of people from the development process," Gandhi said.

He also linked the incidents of lynching in India to joblessness and the lack of opportunities for the poor who, he said, were not being given equal opportunities.

Gandhi said the incidents of lynching were a result of the anger emanating from joblessness and destruction of small businesses due to demonetization and poorly implemented Goods and Services Tax.

Saying that the transformation taking place across the world requires certain protections for the common people, Gandhi accused the BJP dispensation of taking away these protections and hitting the informal economy through demonetization and GST.

"They (the BJP government) feel tribal communities, poor farmers, lower caste people, minorities shouldn't get the same benefits as the elite. The other thing they've done is they've started attacking the support structures created to help certain groups of people. That's not the only damage they've done," he said.

Gandhi said there is "something much more dangerous" that has happened, and that is - a couple of years ago the prime minister "demonetized the Indian economy and destroyed cash flows to small and medium businesses, rendering millions jobless".

The Congress president addressed the gathering for more than an hour. He also took questions from students from across the world.

During his address, Gandhi said that after the US attacked Iraq in 2003, they brought a law that stopped a particular tribe in Iraq from getting jobs in the government and in the army.

"It seemed like a very innocuous decision at that time," he said.

But it resulted in a large number of people joining insurgency "that fought the US and caused massive casualties," he said.

"It didn't end there. That insurgence slowly entered empty spaces. It entered the empty space in Iraq and in Syria and then it connected with...a horrific idea called ISIS," Gandhi said.

He said there is a lot of hatred in the world but not enough people are listening. The only solution, he added, was to understand people.

Outlining his idea of India's foreign policy, Gandhi said there are different visions in the world, including that of the US, China and India. He said India's role should be to balance the US and China - much like Europe's role.

The Congress chief said he has suffered violence and he can say that there is only one way to let it go - that is forgiveness.

"And for forgiveness, you need to understand where it is coming from. My father was killed by a terrorist in 1991. When the terrorist died a few years later, I wasn't happy. I saw myself in his children."

Liberation Tigers of Tamil Eelam chief Velupillai Prabhakaran, who was responsible for the killing of former prime minister Rajiv Gandhi, was shot dead by Sri Lankan troops in 2009.

He said some of his own party members did not like it when he hugged Modi during a debate on no-confidence motion against the government in July.

He said Modi was making "hateful remarks" about him but he showed affection. The basic idea is - it is foolish to respond hate with hate, as doing so would not solve any problem, Gandhi said.

He said the prime minister refuses to see joblessness as a big problem. "You have to accept the problem (first), to fix it," he said.

Gandhi also said he disagreed with the suggestion that India was the worst place for women in the world but admitted the rising incidents of violence against women in the country.

"India needs to change... Men have to start viewing women as equal and with respect. I am sorry to say that men do not," he said.

He said non-violence in India is a founding philosophy of its nationhood and the essence of being an Indian.