Should A Ticket Of One Airline Be Acceptable To Others? 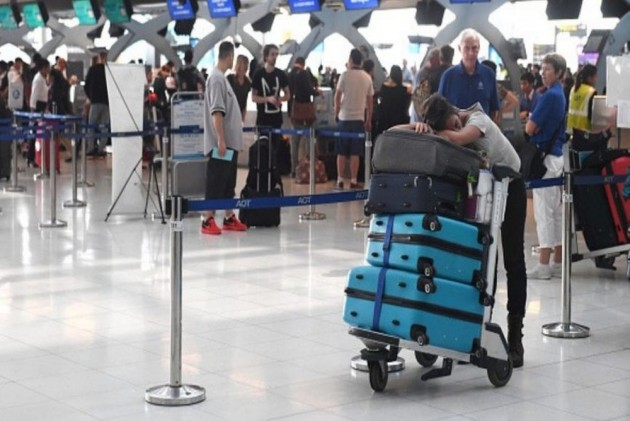 Though even an agreement between the two might not have salvaged a grave situation like this, yet a similar treaty among all airlines might work in favour of fliers.
In fact, Indian operators have such tie-ups with international airlines but in the domestic circle, airlines don’t accept each others’ tickets on the face value.
A section of aviation experts feels that in western countries many airlines have such agreements to help fliers in times of crises.

“Ministry of Civil Aviation can work in this direction and ask all airlines to think of ways to carry each other’s passengers. This is in the interest of the whole sector as flying will become less unpredictable,” says Subhash Goyal, Chairman, Assocham Tourism & Hospitality Council.

Incidentally, on February 28, amidst the mass cancellation of flights, for the first time in India, Civil Aviation Minister Suresh Prabhu released a passenger charter which spells out rights of air travellers in cases of delay and cancellation of flights. However, passengers and observers complain that it was not only vague but lacked teeth too.

For instance, one of the stipulations in the passenger charter states that if you are informed of a flight cancellation less than two weeks before but up to 24 hours of the scheduled departure time, the airline in question must offer an alternate flight or refund of fare based on the choice of the flier.

However, this does not cover situations where the delay is attributed to air traffic control (ATC) staff, adverse meteorological conditions, security risks or “any other causes that are beyond the control of the airlines but which affect its ability to operate flights on schedule”.

“Often, operators attribute the delays to the ATC that helps them evade the proposed compensation,” points out D Sudhakara Reddy, founder and national president of Air Passengers Association of India, (APAI), a non-profit organisation focused on the rights, well-being, and welfare of air passengers traveling across India.

People advocating the cause of passengers say that the passenger charter should make it clear that in case of cancellation, the operator must facilitate alternate flight even in competitors’ flight if the flier opts for that instead of a refund. So even in the absence of agreement among the operators, they will be under obligation to ensure a seat for a flier at its own cost.

The charter also gives a right to passengers to escalate their grievances at the arrival and departure stations, AirSewa app or portal, and in case the response is not satisfactory, they can complain to any statutory body/court set up under relevant applicable laws.

However, the problem is the regulatory framework is complicated in our country with endless litigation processes which discourages consumers from moving to a consumer court.

A frequent flier Amit Gossain, Managing Director, Kone Elevator India, a multi-national company, says that Indian operators try to cut corners leading to inconvenience to the passengers. “The government should frame guidelines that should act as a roadmap for the airline operators to enter into business agreements in the domestic sector to help passengers facing cancellation troubles,” he says.

However, Kapil Kaul, CEO, South Asia, Centre for Asia Pacific Aviation (CAPA), an aviation consulting and research firm, says that it’s not possible to have a practice where one airline’s ticket will be accepted by another airline on the face value because of the substantial price difference between low-cost airlines and full-service operators.

Know your rights as a flier