Home  »  Website  »  Business  »  Ranbaxy And The Culture Of Jugaad: What Brought A Leading Company Down 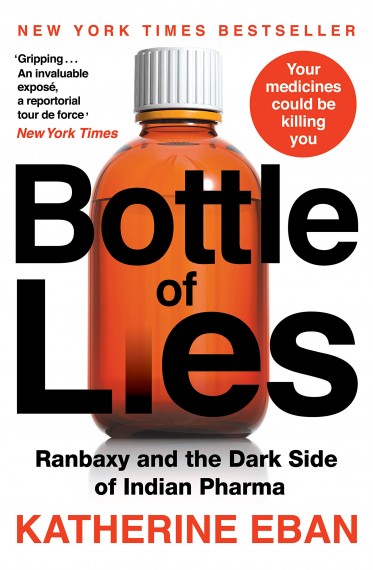 Katherine Eban October 10, 2019 00:00 IST Ranbaxy And The Culture Of Jugaad: What Brought A Leading Company Down

(Following is Author Katherine Eban’s Note in her book The Bottle of Lies: Ranbaxy and the Dark Side of Indian Pharma. Excerpted with permission from Juggernaut Books)

A decade ago, I did not expect to be investigating the Indian pharma industry.

At that point, I was an investigative journalist in the United States. I’d reported on brand-name drug companies, including efforts by opioid makers to increase sales by concealing addiction risks. I’d broken big stories about gun trafficking, as well as the U.S. government’s use of torture in interrogations during the post-9/11 war on terror. To the extent that I thought about generic drugs, I knew they comprised the majority of the U.S. drug supply. I also knew that India had played a critical role in manufacturing AIDS drugs cheaply enough that it had allowed governments, including our own, to purchase and supply those drugs to afflicted African nations.

But in 2008, my reporting on generic drugs began—like so many investigative projects do—with a tip. It was a phone call from a man named Joe Graedon, who co-hosted a U.S. radio program called the People’s Pharmacy. I’d been a guest on his program a number of times. But this time he wanted my help. Patients had been calling and writing to him with serious complaints about generic drugs that either didn’t work or caused devastating side effects. The drugs, though made by different manufacturers and for a range of conditions from depression to heart disease, were all generic -less expensive versions of brand-name drugs, made legally after the patents on those medications lapsed.

Graedon had forwarded the patients’ complaints to top officials at the U.S. Food and Drug Administration (FDA), but they insisted that generics were equivalent to the brand and the patients’ reactions were subjective. Their response struck Graedon as more defensive than scientific. As in most countries, generic drugs had become essential to balancing budgets across America. Without them, every large-scale government health program—from Medicare to the Veterans Health Administration—would be unaffordable. Graedon himself had long advocated making generic drugs more widely available. But the complaints were compelling and similar in nature. He posed a single question to me: What was wrong with the drugs? He wanted someone with “investigative firepower” to look into the patients’ claims.

I began exactly where Graedon pointed me: with the patients. In June 2009, I published an article in Self magazine that documented how patients who had previously been stabilized on brand-name drugs relapsed when switched to certain generics. Their doctors had little data and no significant comparative studies to explain these reactions. Although the FDA reviewed data from the generic drug companies and inspected manufacturing plants, it was not systematically testing the drugs. As Dr. Nada Stotland, a psychiatrist in Chicago and then the president of the American Psychiatric Association, told me, “The FDA is satisfied that generics are okay. My question is, are we satisfied?”

While reporting this article, I first learned about a company well known to most Indians: Ranbaxy Laboratories Ltd. It was a jewel in the crown of Indian pharma, and one of the fastest growing generic drug manufacturers supplying the U.S. market. But I discovered that a cloud hovered over the company. American regulators were investigating whether Ranbaxy had fabricated quality data, in order to gain approval to market its drugs. The allegations had first been made by a company whistleblower, who had contacted the agency.

As I discovered, roughly 40 percent of America’s generic drugs are manufactured in India. A full 80 percent of the active ingredients in all U.S. drugs, whether brand-name or generic, are made in India and China. As one drug-ingredient importer told me, “Without products from overseas, not a single drug could be made.” Though I had begun my reporting with patients, I realized that the answers I was seeking most likely lay in the laboratories, manufacturing plants, and corporate boardrooms of the drug-making companies, the majority of which operated overseas.

It was ultimately two sources who redirected me to look at the distant manufacturing plants making drugs for the U.S. market. One was a generic drug executive, who contacted me anonymously under the pseudonym “4 Dollar Refill.” The phrase referred to the cost of refilling a low-priced generic drug prescription at one of America’s big pharmacy chains. The source explained that there was a gulf between what the regulations required of generic-drug companies and how those companies behaved. To minimize costs and maximize profit, companies circumvented regulations and resorted to fraud: manipulating tests to achieve positive results and concealing or altering data to cover their tracks. By making the drugs cheaply without the required safeguards and then selling them into regulated and more costly Western markets, claiming that they had followed all the necessary regulations, companies could reap enormous profits.

Another source, an FDA consultant who had spent considerable time in overseas factories, also contacted me. She was an expert at examining the cultural “data points,” or situational forces, that drive corporate behavior, and saw those forces at work in India and in other countries with less regulation. One factor is company culture—the tone set by executives, the admonitions or slogans that hang on office or manufacturing-plant walls, the training that workers receive. Ranbaxy’s company culture was unequivocally focused on profit. A framed poster that hung on the walls of the New Jersey office reminded employees of the company’s priority: “USA: $1 billion sustainable profitable business by 2015.”

But company culture is also affected by country culture, the FDA consultant explained: Is a society hierarchical or collaborative? Does it encourage dissent or demand deference to authority? These factors, though seemingly unrelated, can impact manufacturing drug quality and lead to variance between certain generics and brand-name drugs, as well as between generics that are supposedly interchangeable with one another, the consultant posited.

In 2013, I published a 10,000-word article on Fortune magazine’s U.S. website about fraud at Ranbaxy. It detailed how the company had deceived regulators around the world by submitting fraudulent data that made its drugs appear bioequivalent to brand-name drugs. It also featured the story of Dinesh Thakur, a former Ranbaxy executive who had alerted the FDA to data fabrication.

As the article circulated around the world, Indian readers responded on Fortune's website. Reading those comments, I learned a word I had never heard before: Jugaad. The Hindi word, which had both positive and negative connotations, essentially encapsulated Ranbaxy’s approach to business—taking ethically dubious shortcuts to get as quickly as possible to the desired goal.

I wondered, was this approach to manufacturing a wider issue in the global generic pharma industry? Did Ranbaxy’s conduct reflect a one-off scandal or an industry norm? That question led me into the book project, and further reporting in India. I also reported in China, and examined the country’s well-documented manufacturing failings, including how adulterated heparin there had killed over 81 Americans and others around the world. But to some extent, India’s surge in manufacturing sterile finished doses for the U.S., and the world, felt like a newer story.

As I delved into that reporting, two storylines—and two types of companies—emerged. There was Cipla, where the managing director Yusuf Hamied had been a disruptor of the status quo. He had used his position in the pharmaceutical marketplace to help bring price relief and needed medicine to the world’s most disadvantaged patients. One expert described Hamied’s efforts as an example of Gandhian innovation: using the inventions of science for the public benefit. But there was another business model, that of Jugaad, one that aimed to get to the desired outcome by the shortest means possible. That had been Ranbaxy’s approach to getting approvals and market share.

As I reported, whistleblowers began to contact me. They were former or current employees of specific drug companies. The majority were Indian. They were concerned on several levels. One had resigned after being asked to alter data. He wept during our first in-person meeting, as he explained that the generic drug industry was “very dirty.” Several flagged a critical issue: that the big exporting companies were making drugs of different quality for different markets. This meant that, even with the manufacturing shortcuts and sterility lapses in drugs bound for the E.U. and U.S. markets, the drugs being sold into developing markets, including India, were even worse.

My reporting revealed that the drug manufacturers operating in India had little to fear from Indian regulators, who rarely scrutinized applications or censured companies for quality lapses. As one Ranbaxy staffer told the company executive Dinesh Thakur before he became a whistleblower, testing the drugs for India was just “a waste of time,” because no regulators ever looked at the data. What was needed to get approval from the Drug Controller General of India was not real data, but good connections, the man explained. On a reporting trip to India, I met with a senior pharma journalist in Mumbai, who told me, “The nexus between the regulators and the industry is so tight, you won’t be able to break it.”

The lower-quality manufacturing and lax regulation meant that individual Indian patients were getting substandard and ineffective drugs. But the poor quality of those drugs had a larger public-health implication: they were contributing to the problem of drug resistance globally. Subpar drugs, which essentially underdosed patients, allowed pathogens to mutate and develop resistance, even to effective drugs.

Though I am an American journalist, I followed a trail of clues halfway around the globe. Ultimately, my effort to answer a single question—What is wrong with the drugs?—launched me into a decade-long reporting odyssey on four continents as I delved into how globalization had impacted the drugs we all need to survive. I followed the trail of certain drugs around the world, trying to connect the dots. What had patients complained of? What had FDA investigators found? What actions had regulators taken? What had companies claimed? What had CEOs decided? What had criminal investigators turned up? I mined thousands of internal company documents, law enforcement records, FDA inspection records, and internal FDA communications, stacks of which piled up in my office.

The result is a true account of a group of characters struggling to protect global public health, among them Indian heroes; some Indian companies who strove to aid the world’s most vulnerable patients, and others who sought to profit at their expense; and patients, Indians among them, who were both helped and harmed by a generic drug industry claiming to have only their welfare in mind.

When generics work perfectly, and many do, the results can be miraculous. “Basically, the ability of India and other countries to produce generic medicine at a fraction of the cost of the patented drugs saved the lives of millions of people in developing countries,” said Emi MacLean, formerly the U.S. director of the Access to Essential Medicines Campaign at Doctors Without Borders. The plunge in prices has also made medicine affordable and treatment possible for millions of Americans who have no alternative to generics without significant price regulation of brand-name drugs.

Generic drugs are essential to health care systems around the world, and their quality is critical to us all. Nonetheless, in my effort to answer the question that Joe Graedon posed ten years ago—what is wrong with the drugs?—I uncovered the labyrinthine story of how the world’s greatest public health innovation also became one of its greatest swindles.