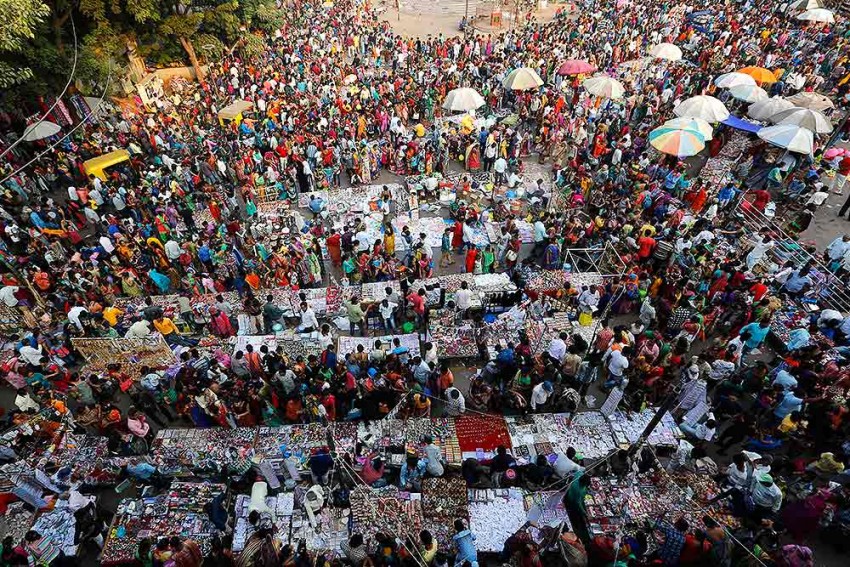 People throng a market on the last Sunday ahead of festival Diwali in Ahmadabad. Festival of lights Diwali will be celebrated on Nov. 7.(Representational photo: PTI)
Rajendra Pratap Gupta 2019-06-30T21:01:31+05:30 OPINION | Turning Around The Indian Economy: Solutions 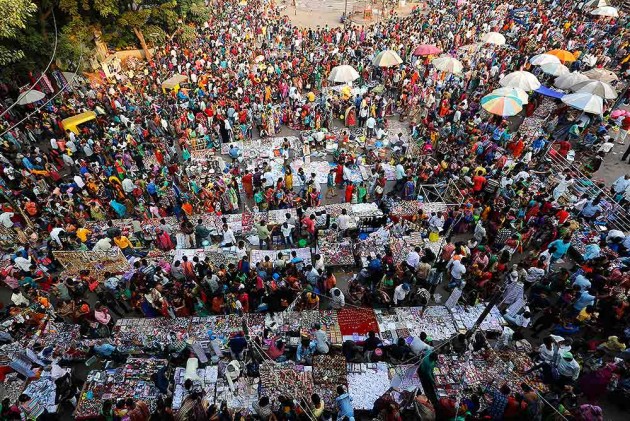 Appropriate measures to address the twin-challenge of economic crisis and job creation can help transition our economy to middle class from the current lower middle class, as defined by The World Bank classification. If we take the right steps, India can start growing at more than 10 per cent every year in the next 4 – 5 years.

Short term solutions for the Economic Crisis and job creation:

We need to create between 1 – 1.2 crore jobs per year. Based on the data, with every 1 % growth, we create 7.5 lac jobs (World Bank), and so, we need to grow between 13.3 – 16 % per year to create this number of economic opportunities. And this means, doubling, or perhaps trebling our current growth rate, which is not possible in immediate future. However, in the next 4 -5 years, India, if following what I propose, can touch 10-12 % growth for sure.

I discussed with business owners across sectors and towns the cost of job creation which is dividing the total business investment by the number of jobs it creates. After my analysis, the average cost is about Rs. 3 lac per job which can give enough money to a family to sustain a livelihood. So, in the forthcoming budget, the government will have to factor a Growth Fund or an Economy Development Fund or simply put, a stimulus of Rs. 3 to 3.6 lac crore, and it has to continue for the next 4 years to solve the job crisis and boost the economy.

If we don’t do it, even saving existing jobs will prove to be a major challenge, let alone creating new ones. We will have to do this investment for the next four years. During these years, we have to parallelly work on the economic model and programs to address the ‘systemic’ and ‘cyclical’ challenges going forward.

I am of the belief that this ‘cyclical stimulus’ will contribute to addressing the ‘systemic challenge’. If done rightly – I call it the ‘Cyclical solution to Systemic problem’. Implementation holds the key. Only pumping in money will not address the real issue.

The cost of job creation analysis sprang up another surprise. Bigger the enterprise, higher the cost of job creation. So, we should be focussing on increasing the contribution of MSMEs to the economy. The key to achieving that is putting a premium on quality, innovation and availability of capital, and we need to have a clear program for the same - minus bureaucracy.

We will need to transition poor/lower middle class to middle class, give more money in their hands. So, I expect the budget will raise the tax limit to Rs. 8 lakh, at least, if not Rs. 10 lakh, which will enhance the spending and saving the power of the Indian middle class. Let us not forget that when I, as a consumer, spend more, the government gains in the form of taxes that it levies as GST. Moreover, the additional sale has a cascading effect on economic growth through inter-connected sectors.

To address the long-term growth-in double-digits, distributed across a stratum, and sustainable, we need to consider the following:

Set up the District Employment and Entrepreneurship Facilitation Agency (DEFA) - Under the ministry of MSME, in partnership with business schools in every town. DEFA is expected to do town-pin code-wise analysis of population-business potential, make projections, and advice on the number of units for a particular business, that can be sustained in an area. Without this, we will continue to see mushrooming of businesses, and their eventual shutting down, causing an irreparable loss to the entrepreneur, and the resultant job losses.

Vishwakarma Programme: This should be aimed at providing identity, productivity and security to unorganized labour. I made a presentation about the same in April 2018 before ministers of labour from various states. This program will use a digital app to connect labourers to employers, and will also link them for skills updation, address the issue of labour migration, child labour and fair payment of wages-digitally, besides linking them to various schemes on skill enhancement etc. This program, if implemented well, will address the issue of 5 crore people in the construction industry - one of the key engines of the economy that impacts multiple sectors.

Tourism Bonds: When the government raises money via global tourism bonds, the private sector will invest in hotels and other infrastructure for products and services. This will have a multiplier effect on investment, job creation and GDP growth. This should be announced in this budget. It has the potential to raise GDP by about 1 % to start with and can go beyond.

Railway hubs: This is also important and it should get into the budget. We need to utilize the unused land at railway stations, and come out with a plan to set up ‘Railway hubs’. For example, key railway stations can be developed into complexes and can host offices, hotels, malls, restaurants. Not only the rentals will bring decent income to railways to boost its investment and make it sustainable, but the hubs will also motivate people to use public transport for reaching their ‘destination’.

Digital India and dovetailing this into an overarching theme of - ‘A Connected Global world’: India must aim at gaining at least 20 % of the world market in IOT, AI, Blockchain, Agriculture research, and NanoTech. We cannot remain ‘digital slaves’ for the products from the first world if we have to join the first world league. The recent isolation of Huawei must open our eyes. In one shot, this global giant is likely to take a hit of $30 Bn for being dependent on an operating system from the first world!

Cultural Policy: Cultural policy can create jobs and is a massive economic opportunity. Arts, sculpture, dance, folk music, tribal arts, buildings, languages etc., constitute cultural policy. We need focus and a plan backed by a long-term vision (policy). Kumbh Mela at Prayagraj is a great example. With Rs. 4200 crore investment, we created an economic value of Rs.1.2 lac crore, and it created 6 lac jobs. We can do wonders here as we have a good cultural legacy. Culture creates maximum creative jobs for the youth.

Fiscal deficit vs Investment deficit: We need to take a conscious call - rather than being driven by irrational and illogical ratings of foreign agencies. Let’s not stifle growth by trying to maintain the fiscal maths. Rather, we need massive upliftment that is capital intensive. As long as we are making capital (infrastructure) investments, let the fiscal deficit breach 5 percent in the near term (3-5 years). With about double-digit growth we achieve due to these investments, we will be able to meet our obligations comfortably.

In the book, "Your Vote is Not Enough", I have analysed the sectoral job creation and the resultant economic opportunity. Indian economy can support or create about 78 crore jobs - employment - entrepreneurial opportunities, if we execute the plan as envisioned. Not only do we have to look at the population of youth, but also consider the ‘old age dependency ratio’ (the ratio of older dependents (people older than 64) to the working age population (those aged 15-64)). As of now, we have 13 crores senior citizens. We have to factor their needs in our development model. If we don’t address this issue simultaneously, the growing needs of senior citizens and their dwindling income will drag the economy backwards, despite our growth.

So, when it comes to a choice between MSME and large-scale enterprises, we must choose MSME.

When it comes to modernization of agriculture with GM crops, we must choose organic farming.

When it comes to mass urbanization and smart cities, we must choose ‘Ruralization’ (moving people to the countryside).

Rather than just creating large scale enterprises, we must choose to create consumers at large scale.

Given a choice of growing GDP, we must choose GDP per capita – That is the key.

Administrative and bureaucratic reforms: If we fail to address the bureaucracy, we will fail to transform the speed with which can implement reforms. In 1911, we moved our national capital from Kolkata to Delhi. Now, we need to move our capital from Delhi to ‘Digital’(Cloud).

Instead of having officials and ministers reaching office at 9.30 am, it may make more sense to set a target for timebound implementation of clearance of files, projects and programs, with monitoring in the field. Let them spend more time in the field meeting people and learning the realities on the ground, and clearing files on the move - with ‘proper’ file notings. To me, now, we need to focus on outcomes rather than processes, if India needs to speed up transformation.

As a country, we need to get our focus correct and prioritize right for addressing cyclical and systemic challenges, fall out of failing globalization and increasing Chinazation. For this, we need to work for - people and profit; welfare along with wealth; and trade over war. While, India’s problems are systemic and cyclical both, cyclical stimulus backed by systemic change can turnaround India to the world’s biggest economy in the next quarter of a century.

The first part of this series can be read here: "Turning Around Indian Economy: Challenges"

Prof. Rajendra Pratap Gupta is a leading public policy expert. The article has quoted data and ideas from the book ‘Your Vote is Not Enough’ With permission from the publisher. Twitter@rajendragupta