The Indian traders now hope to replicate the rakhi success in Diwali diya and other festive product sales. 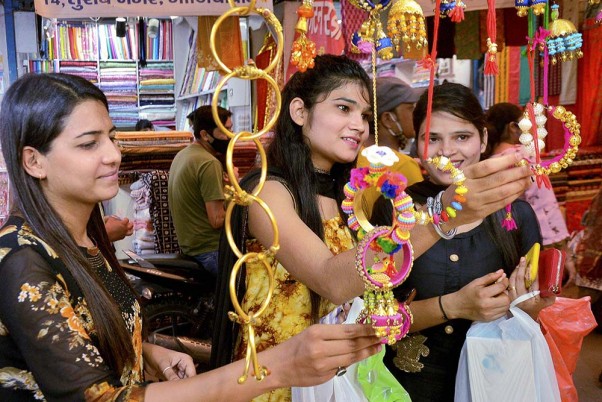 An unforeseen positive outcome of the health pandemic together with the push to promote indigenous production of festive gifts, curios and artefacts has been a revival in the demand and sale of Indian rakhis, unlike in the last several years when Chinese products had virtually dominated the market.

According to trade estimates around 50 crore rakhis, tied on the wrist of brothers to mark Rakshabandhan with a promise to protect the sister, are sold within the country.

Shantmanu, Development Commissioner Handicrafts, told Outlook that this year there has been an increase in demand for Indian festive products within the country, which has helped to boost domestic production.

Raksha Bandhan 2021: What Is Digital Gold And Is It A Good Rakhi Gift?

“In the last two months since the government has resumed its activities of promoting handicrafts through exhibitions held across the country, we have started reserving at least two stalls to promote products for the nearest festival in that area,” says Shantmanu.

The encouraging response has boosted the union ministry of textiles plans to promote indigenous handicrafts not only with an eye on exports but also for domestic consumption. The ministry annually organizes around 300 exhibitions across the country in various cities and towns.

Alongside the government efforts, the manufacturers and traders too have done their bit to revive domestic manufacturing of handicrafts particularly products that are part of various festivals like idols for Janmashtami, Ganesh chaturthi, etc.

“With the cooperation of these women, crores of rakhis were made in the last month and a half under the mentorship of more than 40,000 trade associations, which are members of CAIT,” states Khandelwal.

A special feature of these rakhis was that they have special features representing the place of origin like the khadi rakhi made in Nagpur, Sanganeri art rakhi in Jaipur, seed rakhi in Pune, wool rakhi in Satna in Madhya Pradesh, bamboo rakhi from tribal items in Jamshedpur, tea leaves rakhi in Assam, jute rakhi in Kolkata, silk rakhi in Mumbai, date palm rakhi in Kerala, pearl rakhi in Kanpur, Madhubani and Maithili art rakhi in Bihar, stone Rakhi in Pondicherry, flower Rakhi in Bangalore, etc.

The traders are hopeful that this attempt to edge out Chinese products dominance in the festive season gifts and other artefacts would help to revive India’s cottage and village industries and improve the livelihood of millions.

“We hope to replicate the rakhi success in our Diwali diya and other festive product sales,” says Khandelwal.