Recent NCRB data shows that there has been an alarming rise in online financial frauds in 2020. Digital fatigue due to the long usage of devices, working from home are some of the major reasons behind this rise.

The outbreak of Covid-19 compelled people to get used to a digital life. Be it reading news or ordering food or buying items, people across ages had to learn doing things online. While the masses found comfort in transacting online from their homes, “cyber criminals took advantage of an opportunity to profit from our dependence on technology to go on an internet crime spree”, mentions a report by the Internet Crime Complaint Centre, IC3, which works with the Federal Bureau of Investigation (FBI) to combat cybercrime.

After Covid struck, there was an alarming rise in the rate of cybercrime across the globe, and the situation in India was no different. Banking and financial frauds constituted more than one-third of all cybercrimes involving communication devices as the medium/target in 2020 that come under the Indian Penal Code (IPC), as per data from the government’s National Crime Records Bureau (NCRB). The bureau collates data for cybercrimes under various heads, one of which is communication device-related crimes. Under this, we have considered financial cybercrimes.

More than 45 per cent of all financial frauds, under communication device-related cybercrimes, are of online banking frauds. Other forms of reported crimes include ATM, credit/debit card and OTP frauds. Thus, out of every 10 reported cases of financial cybercrime involving communication devices, almost five cases are of online banking fraud in India. 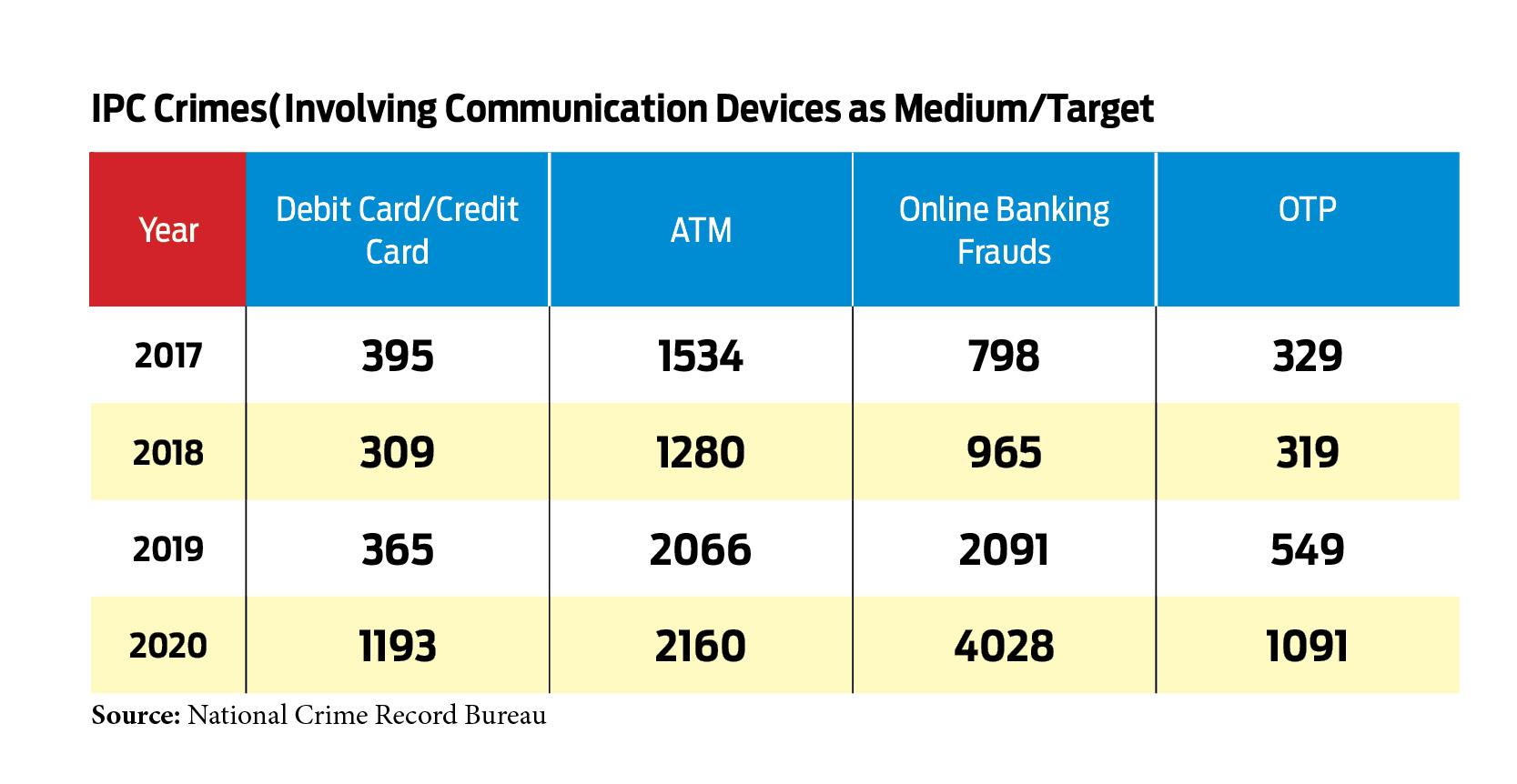 Some of the major online banking frauds mostly include phishing and Trojan, according to information on the Delhi Police website. Phishing involves stealing personal information such as Customer ID, IPIN, credit/debit card number, card expiry date, CVV number, etc. through emails, text messages that appear to be from a legitimate source.

As described by the Delhi Police, Trojan is a harmful piece of software that users are, typically, tricked into loading and executing on their computers. After it is installed and activated, Trojan attacks the computer leading to deletion of files, data theft, or activation/spread of viruses. Trojans can also create back doors to give access to hackers.

What’s Leading To The Rise In Online Financial Frauds?

Is it just the growing dependency on technology that is leading to online financial frauds? Experts say the socio-cultural context may also be contributing to it. “High inflation, unemployment, lesser job opportunities could be some of the major factors. Empty mind is a devil’s workshop. A lot of unemployed individuals are getting into hacking and all, to find alternative ways of income,” says Dr Charru Malhotra, who has worked extensively in IT, Cybersecurity and Digital Transformation and currently is the coordinator (Centre of eGovernance ), Indian Institute of Public Administration (IIPA), New Delhi.

Another reason that contributes largely to the growing number of online banking frauds is the practice of working from home. Malhotra says that in an office set-up, there is more security as employees access laptops and desktops with high levels of security systems, but when individuals are working from home, there are higher chances of leaving careless digital footprints as houses don’t have strict digital security and privacy measures.

Digital fatigue among people is another factor that is contributing to financial fraud. “Digital fatigue leads to carelessness. Thus, often people forget to secure the profile and the guard is less,” adds Malhotra.

In February 2020, Christine Lagarde, president of the European Central Bank and former head of the International Monetary Fund, warned that a cyberattack could trigger a serious financial crisis. In April 2020, the Financial Stability Board (FSB) warned that “a major cyber incident, if not properly contained, could seriously disrupt financial systems, including critical financial infrastructure, leading to broader financial stability implications,” mentioned a report on global cyber threat published by IMF in March 2021.

While cyber-attacks pose a serious threat to the economy, the report mentions that the financial setup is specifically more vulnerable. “Many threat actors are focused on making money, the number of purely disruptive and destructive attacks has been increasing; furthermore, those who learn how to steal also learn about the financial system’s networks and operations, which allows them to launch more disruptive or destructive attacks in the future (or sell such knowledge and capabilities to others),” says the report.