'BJP Is Not Clear On What Stand To Take' 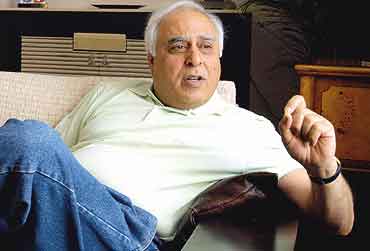 
Nagendar Sharma: Where do you think the UPA government go wrong in handling the office of profit issue? Would you claim it was the first major blunder of this government which led to a major embarrassment?

Kapil Sibal: I think it has been a blunder on the part of opposition parties, as they tried to make this issue Sonia specific, which in reality it was not and those very parties which were at that time saying that the government was trying to save Sonia Gandhi are now talking about getting a bill passed in this regard at the earliest. So I say it is the opposition which tried to mislead the people of the country and they also tried to make an issue where none existed. Opposition only had one issue and that was Sonia Gandhi. They feel that between them and the power she was the only hurdle. So their gameplan was to remove Sonia Gandhi from their path and they could go to any extent in this.

Nagendar Sharma: But, Mr Sibal, why was the parliament session adjourned sine die suddenly on March 22nd, when the schedule clearly said the session would break for recess between March 22 and May 10, and would assemble again for the remaining budget session? Wasn’t it the UPA government itself which bungled on this issue and gave credence to the impression that it wanted to bring an ordinance to bring Sonia Gandhi’s NAC out of office of profit purview?

Kapil Sibal: Let me clear the air on this as due to misleading campaign of the opposition, the  real picture has not reached the people of the country. Two-three days before the session was to end, talks were being held with all political parties on this issue, and all of them were saying that a legislation should be brought and passed at the earliest to end this office of profit controversy.

However, when an English daily reported about the ordinance, some political parties particularly the Samajwadi Party thought they had got a chance to target Sonia Gandhi and make a big issue out of this and they began shouting that the ordinance was being brought to save only the Congress President and not others. Let us all be clear that if a bill was to be brought in this regard, it could not have been passed in a day as it had to go through both the houses of parliament.

Had the government not adjourned the session sine die, this period would have been counted as inter-session period, which would have meant preventing the government from transacting even day-to-day business and the opposition would have continued with its baseless campaign particularly on Sonia Gandhi, as the trouble with the BJP is that they see her as the biggest hurdle in their way of capturing power. The only issue they want to raise is Congress President and nothing else, they are neither concerned with people’s issues nor with national issues, they are obsessed with Sonia Gandhi.

Listener from Uttaranchal: Sir, office of profit controversy has exposed all the political parties in the country. If at the centre the BJP is shouting over Sonia Gandhi and other leaders of the ruling UPA holding offices of profit, it is scampering for cover in Jharkhand where Arjun Munda government is in the dock on the issue. Has this issue not laid bare the reality of our elected representatives that they are worried only about their interests?

Kapil Sibal: I think the whole approach to this issue has been wrong. Article 102 and 191 of the Constitution deal with offices of profit and they say that no elected member of Parliament or State Legislature can hold any office of profit, but at the same time these sections also clearly state that the Parliament has a right to exempt certain offices from being called offices of profit by bringing in a legislation under the provisions of Parliamentary Prevention of Disqualification Act 1959. This is a procedure which is inherent in the Constitution itself to allow the public representatives to work for people’s welfare.

It is wrong to link this to morality and criticise the MPs on a non-issue. I would like to give you an example, look at National Commission for Women, or the Scheduled Castes/Scheduled Tribes Commission and even the National Commission for Minorities – all these offices are termed as offices of profit, but let us all be clear these are not for private profit. These offices were set-up for public welfare and the officials of these bodies do not work for private profit, and therefore were exempted in accordance with the provisions of 1959 Act.

In all this debate, if there is a case of private profit, then yes it is a definite case for disqualification. What I am trying to say is that the opposition parties tried to raise this issue without having done their homework. The BJP which was shouting over it in Delhi, had its state government in Jharkhand passing the bill to exempt certain offices from being called the offices of profit in the state and completed the entire formalities in two days and then adjourned the assembly sine die! This is the reality.

Listener from Ambedkarnagar: Sir you are saying that the opposition tried to make an issue out of nothing, but is it not a fact that the Congress party was itself behind the disqualification of Jaya Bachchan from Rajya Sabha and today when it backfired on you in the form of opposition attack on Sonia Gandhi, you are now saying that opposition was after her?

Kapil Sibal: Well, the petition against Jaya Bachchan was filed by a candidate who fought the election against her. True, he was a Congress candidate, but remember political parties do not ask the candidates to file petitions, it is their own decision. What I can tell you is that parties do not stop them from airing their grievances at an appropriate forum. Those parties who are today saying that Congress was behind the disqualification of Jaya Bachchan, would they tell us whether they direct their candidates to file petitions? Also all of us should bear in mind that constitutional bodies such as the Election Commission are function autonomously. Are those pointing fingers trying to say that the EC works under political pressure?

Listener from Nagpur: Sir you are putting up a robust defence of the government, but still the point is that the opposition was provided ammunition by the UPA itself. Whether NAC chairpersonship was an office of profit or not should have been taken care of at the time of its setting up. Why did the government wake up so late on this?

Kapil Sibal: My answer is straight that whether the office of NAC chairperson, which was held by Mrs Sonia Gandhi, was an office of profit or not – is not to be decided by Mr Advani or Amar Singh nor by anyone else. It was to be decided by the Election Commission, and that too was a matter of interpretation. So far as we are concerned, I still maintain the NAC was not an office of profit. It was not under the government and was not subject to government directions, how could anyone term an advisory body as an office of profit? It was for us to decide on the status of NAC. The parliament has a right to decide on the issue. Mr Advani enjoys the status of a cabinet minister even today by virtue of being the leader of opposition. Now should one say that it is an office of profit? [The office of the leader of opposition is expressly exempt under the amended Act - Ed]

Kapil Sibal: I would like to point out what the BJP stand on this issue has been so far. BJP President Rajnath Singh was saying one thing, while Arun Jaitley was saying something else on the matter. Rajnath Singh said such a bill should be brought and passed retrospectively, whereas Jaitley said the bill should be passed but not retrospectively. However the BJP president again said this was not the case and it should be passed retrospectively only. BJP is not clear on what stand to take. Their only issue was to target and attack Sonia Gandhi.

The BJP has still not recovered from the shock they suffered after losing the 2004 general elections and are afraid to think that they have to sit in opposition for the next three years also. The government has already to spoken to all the parties on this issue. Where majority of them, except the BJP are saying that this bill should be brought and passed at the earliest.  The BJP is saying it wants the draft of the bill first. We would like to watch how the BJP votes on this bill and we would then like to question them whether they voted to save themselves or to save Sonia Gandhi, whom they targeted from day one. Let me tell you that since Sonia Gandhi cannot be targeted anymore on this issue, therefore the opposition parties have no problem now in getting the bill passed.

Nagendar Sharma: But Mr Sibal is it not the right time for Parliament to clearly define the office of profit and end the controversy once and for all? There is a also a general feeling about MPs’ conflict of interest. Don’t you think that should also be clearly defined?

Kapil Sibal: There cannot be a general definition for the office of profit. Like democracy and negligence cannot be given a general definition, same is the case with office of profit, these things can only be looked upon on case-specific basis. There was no question of good or bad handling. It is the opposition which has been exposed on the issue. I think the conflict of interest can be defined and I would favour a law based on consensus to deal with this. As it happens in the United States, if you are a businessman you have to sell or transfer your shares before you enter the Senate or House of Representatives.

Conflict of interest is an important question and, for example, if you look at lawyers, they can continue their practice while being MPs if they are not ministers. Now there are big industrialists who are lawyers' clients, they maybe from the steel industry or from IT. Some matters related to their business maybe raised in parliament from time to time and the lawyer being an MP may comment on such an issue. It could be termed as conflict of interest.

In this regard lawyers, medical practitioners and industrialists - all seem to be falling in the category of conflict of interest, I admit. In such circumstances, I would say that a law based on consensus should be brought and such people should be asked to stop their work so long as they are MPs so that they stay above suspicion. I would welcome such a step and would congratulate the initiators of this move. My view in this matter is that only those who are seriously interested in public service have the right to be public representatives.