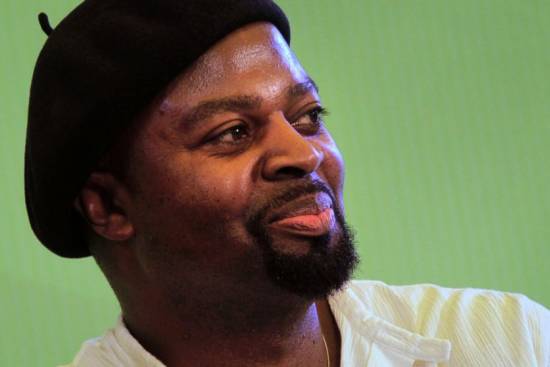 When his hand brushed her nipple it tripped a switch and she came alight. He touched her belly and his hand seemed to burn through her. He lavished on her body indirect touches and bitter-sweet sensations flooded her brain.

She became aware of places in her that could only have been concealed there by a god with a sense of humour. Adrift on warm currents, no longer of this world, she became aware of him gliding into her. He loved her with gentleness and strength, stroking her neck, praising her face with his hands, till she was broken up and began a low rhythmic wail. She was a little overwhelmed with being the adored focus of such power, as he rose and fell. She felt certain now that there was a heaven and that it was here, in her body. The universe was in her and with each movement it unfolded to her.

Somewhere in the night a stray rocket went off.

The Literary Review has found its " most egregious passage of sexual description in a work of fiction" for the year, from Ben Okri's The Age of Magic, which was declared the winner of the 22nd Bad Sex in Fiction Award.

The Age of Magic is Ben Okri's 10th novel. He won the Booker Prize in 1991 for The Famished Road and has received, among other prizes, the Commonwealth Writers' Prize, the Aga Khan Prize for Fiction and the Guardian Fiction Prize.

The prize was presented by the Reverend Richard Coles, former member of chart-topping band The Communards, presenter of Saturday Live and latterly a Church of England priest. Okri was unable to attend, and issued a terse statement:

“A writer writes what they write and that’s all there is to it.”

Laura Palmer, editorial director of his publishers, Head of Zeus, accepted the award and said:

“This completes every start-up publisher’s dream hat-trick: Head of Zeus have now won a Political Book award, the Metadata Gold Standard award, and the Literary Review Bad Sex in Fiction award all in a single year.”

“Winning the award is fun but a bit undignified, just like sex, assuming you do it properly.”

As Jonathan Beckman, a senior editor at the Literary Review, said, The Age of Magic prevailed over competition from arguably the most distinguished shortlist ever assembled that included the winners of the Man Booker Prize, the Pulitzer Prize, the Franz Kafka Prize, the Commonwealth Writers' Prize, the PEN/Faulkner Award

Beckman said that in 2011, this year's Booker winner Michael Cunningham, narrowly avoided nomination for a scene that featured small breasts with large nipples 'the size of the tip of his little finger, and the color of pencil erasers'. These reappear, with a little tweak - 'her nipple (biggish for her tiny breasts, raspberry-colored)' - as he finally makes the grade but that he ' swaddles the encounter in so many abstract nouns that the whole experience becomes very obscure and desexualised':

The Narrow Road to the Deep North by Richard Flanagan

Whatever had held them apart, whatever had restrained their bodies before, was now gone. If the earth spun it faltered, if the wind blew it waited. Hands found flesh; flesh, flesh. He felt the improbable weight of her eyelash with his own; he kissed the slight, rose-coloured trench that remained from her knicker elastic, running around her belly like the equator line circling the world. As they lost themselves in the circumnavigation of each other, there came from nearby shrill shrieks that ended in a deeper howl.

Dorrigo looked up. A large dog stood at the top of the dune. Above blood-jagged drool, its slobbery mouth clutched a twitching fairy penguin.

Colorless Tsukuru Tazaki and His Years of Pilgrimage by Haruki Murakami

The girls entwined themselves lithely around Tsukuru. Kuro's breasts were full and soft. Shiro's were small, but her nipples were as hard as tiny round pebbles. Their pubic hair was as wet as a rain forest. Their breath mingled with his, becoming one, like currents from far away, secretly overlapping at the dark bottom of the sea.

These insistent caresses continued until Tsukuru was inside the vagina of one of the girls. It was Shiro. She straddled him, took hold of his rigid, erect penis, and deftly guided it inside her. His penis found its way with no resistance, as if swallowed up into an airless vacuum. She took a moment, gathering her breath, then began slowly rotating her torso, as if she were drawing a complex diagram in the air, all the while twisting her hips. Her long, straight black hair swung above him, sharply, like a whip.

The Snow Queen by Michael Cunningham

They both know they have to do this quickly. He slides his dick into her. She sighs more loudly, but it's still a sigh, not a sex moan, though this time there's a soft gasp at the end. Tyler is inside her, here's the heat, the powerful wet hold, and fuck, he's about to come already. He holds off, lets his cock rest in her, lies on top, his face pressed to her cheek (he can't seem to look directly at her), until she says, 'Don't wait.'

He thrusts once, cautiously. He thrusts again, and he's gone, he's off into the careening nowhere. He lives for seconds in that soaring agonizing perfection. It's this, only this, he's lost to himself, he's no one, he's obliterated, there's no Tyler at all, there's only… He hears himself gasp in wonder. He falls into an ecstatic burning harmedness, losing, lost, unmade.

In Beckman's words, Wilbur Smith is a hardy perennial of these awards and his new novel, Desert God, does not fail to deliver. He offers grammatical and anatomical pedantry' but ' seems weirdly frictionless, an opportunity for metaphor-making above anything else.'

Her hair was piled high, but when she shook her head it came cascading down in a glowing wave over her shoulders, and fell as far as her knees. This rippling curtain did not cover her breasts which thrust their way through it like living creatures. They were perfect rounds, white as mare's milk and tipped with ruby nipples that puckered as my gaze passed over them.

Her body was hairless. Her pudenda were also entirely devoid of hair. The tips of her inner lips protruded shyly from the vertical cleft. The sweet dew of feminine arousal glistened upon them.

The Legacy of Elizabeth Pringle by Kirsty Wark

He said my name over and over as he lifted me up, my legs curled around him, and laid me down beneath him on the high bed. I had never imagined that I was capable of wanton behaviour, but it was as if a dam within me had burst and we made love that day and night like two people starved, slowly suffused with more and more pleasure, exploring and devouring every inch of each other, so as not to miss one single possibility of passion.

In Beckman's words, May-Lan Tan, author of Things to Make and Break, shortlisted for the Guardian First Book Award, is desperately keen to let us know how hot her female protagonist is. Literally hot: 'she has the smallest, hottest mouth, as if she's storing lava in her cheeks. I shut my eyes, holding her hair by the roots. My bones start to liquefy.' And it's not just her mouth: 'God. It's like sticking your cock into the sun. I fuck her deep and slow, watching her mouth and feeling her move. When I get too close, I pull out and let my dick cool':

Things to Make and Break by May-Lan Tan

She wriggles down under the blankets and pulls off my jeans and skivvies. I lie back and her hair tickles my stomach, her mouth wrapping over me. I'd forgotten this about her: she has the smallest, hottest mouth, as if she's storing lava in her cheeks. I shut my eyes, holding her hair by the roots. My bones start to liquefy.

When I'm about to come, I flip her onto her back and take off her underwear. I roll her nipple on my tongue and rub her clit with my thumb until her lips get slippery. I glide my middle finger in and out, then fold her legs up and push in. God. It's like sticking your cock into the sun.

The Hormone Factory by Saskia Goldschmidt

She was moaning softly now, her breath coming faster. She tasted of apples. Her soft warm flesh was driving me crazy – that dish of delight my tongue was now lapping at frenziedly. Her suppressed cries were coming faster and faster. I unbuttoned my pants, pushing them down past my hips, and my beast, finally released from its cage, sprang up wildly. I started inching my way back up, continuing to stimulate her manually, until the beast found its way in. She opened her eyes and said softly, 'I'm still a virgin, please be careful.'

I kept myself quiet for a moment, kissed her and said, "I'll be very gentle, all right?"

Running her tongue over her lips she nodded; she was as hot as boiling water in a distillation flask, and it wasn't long before I was able to really get going. We both came at the same time. I stayed inside her for a few seconds, gazed at her, and smiled.

The Lemon Grove by Helen Walsh

She closes her eyes. Shakes her head.

"We can't," she begins. His mouth is on hers; his tongue is jabbing around her gums, the wrinkled roof of her mouth. He pulls away a second time.

She looks him in the eye. She reaches out and cups his balls and squeezes gently. Nathan closes his eyes, bites his lip. Then he steps into her, furious. And when it hits her, it slams her hard and fast, as life once had.

The Affairs of Others by Amy Grace Loyd

I continued to tell her flesh of its gifts, such pleasure, gently but insistently given, even biting her earlobe with my front teeth, sweeping her hair from her face, her neck, as she cried, and breathed less jaggedly, "It hurts, it hurts." I did not stop until it stopped hurting, until I heard pleasure articulated from her. Her throat as open as her body, wet everywhere from tears and the coming, and I did hear it, a long high twisting cry and a twisting in my arms as my fingers dove up and up into the full expressive wetness of her. Hold me, hold me. Here and here, she said after she came, placing one of my hands between her legs to press again, another over her breasts. Hold me tight.

Last year the prize was won by Manil Suri for The City of Devi published by Bloomsbury.

Other past winners include Jonathan Littell (2009), Rachel Johnson (2008) and Norman Mailer (2007). John Updike was awarded a Bad Sex Lifetime Achievement Award in 2008.

In League With The Cops