The mutiny across Bangladesh by directly-recruited junior officers and other ranks of the Bangladesh Rifles (BD) bodes ill for the recently-elected (in December,2008) government headed by Sheikh Hasina. 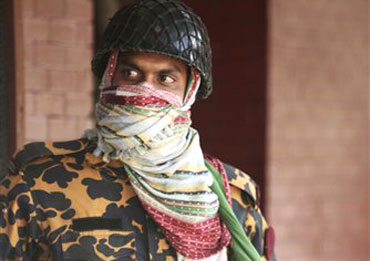 "In an assessment on Bangladesh disseminated in January, 1997, this writer had observed as follows:

"There are individual officers in the Bangladesh intelligence community and in its security forces, who feel positively towards Sheikh Hasina (Prime Minister) and her father, but one cannot say the same thing of these organisations as institutions. Institutionally, they may not share with her the same enthusiasm for closer relations with India and for assisting it in dealing with the insurgency (in the North-East).  It would take her and her party considerable time to understand and assess the intricacies of their working and the labyrinthine relationships which they have built up with their Pakistani counterparts during the last 21 years.  She, therefore, has to move with caution."

"The savage manner in which 15 members of India's Border Security Force (BSF) were reportedly abducted, tortured, killed and their bodies mutilated beyond recognition last week shows that even after almost five years in power, Sheikh Hasina is apparently not in total command of her military and intelligence establishment, which like its counterpart in Pakistan, has been infected by the fundamentalist virus of Afghan vintage and is probably developing an agenda of its own vis-à-vis India."

The current mutiny across Bangladesh by directly-recruited junior officers and other ranks  of the Bangladesh Rifles (BD) bodes ill for the recently-elected (in December,2008) government headed by Sheikh Hasina. Their mutiny, which started in Dhaka on February 25,2009, and has since spread to other parts of the country, including Chittagong, ostensibly over long-pending grievances regarding pay and allowances and food rations, is directed till now not against the political leadership but against the senior army officers--serving and retired--on deputation to the BDR.

The targeted Army officers occupy senior positions in the command and control of the BDR and their pay and allowances and other perks are governed by those applicable to the army officers and not by those applicable to the directly-recruited officers of the BDR. Resentment over what is perceived by the direct recruits as the step-motherly treatment meted out to them by the deputationists and re-employed officers of the Army seem to have acted as the trigger for the mutiny.

The spreading mutiny, during which a number of senior army officers serving on deputation in the BDR, are reported to have been either killed or held hostage, seems to have taken the Army and political leadership by surprise. It was the outcome of a secret conspiracy well-planned  and well-executed by the junior officers and other ranks. The intelligence wing of the Bangladesh Police and the Army-dominated Directorate-General of  Forces Intelligence (DGFI) seem to have been taken by surprise. If the DGFI had advance information, it would have at least tried to alert the senior army officers so that they did not become targets and victims of the mutineers. The fact that it did not do so  suggests that the DGFI was not aware.

The fact that the mutineers were able to plan and execute this conspiracy in total secrecy with even the grass-roots political cadres of different parties not  getting scent of it, speaks of a well-organised anti-army network inside the BDR. The identities of the ring leaders of the conspiracy remain unclear. A question of major concern both to the BD political and military leadership as well as to India should be--was the mutiny purely due to bread and butter issues or is there something more to it?

As in the case of the BD Army, in the case of the BDR too, many of the recruits at the lower levels come from the villages and quite a few of them are products of the mushrooming madrasas across the country funded by money from Saudi Arabia, Kuwait and Pakistan. The rural areas of Bangladesh and the madrasas there are the main recruiting and brainwashing grounds of  the Harkat-ul-Jihad-al-Islami (HUJI-B) and other jihadi organisations. While the international community has paid considerable attention to monitoring the infiltration of the Pakistani Armed Forces by fundamentalist and jihadi elements since the days of the late Gen.Zia-ul-Haq, similar attention has not been paid to monitoring the presence of  fundamentalist and jihadi elements in the BD Armed Forces and the BDR.

Senior officers' relationship with the junior ranks  has always been the Achilles' heel of the BDR, which used to be known before the birth of BD in 1971 as the East Pakistan Rifles (EPR). The EPR consisted largely of Bengali direct recruits officered by Punjabi and Pashtun deputationists from the Pakistan Army. Resentment over the humiliating attitude of the Pakistani Army officers towards the Bengali junior ranks was an important factor, which had contributed to the desertion of large sections of the Bengali junior ranks from the EPR and their joining the freedom struggle under Sheikh Mujibur Rahman.

After the birth of Bangladesh those members of the EPR, who had deserted and joined the freedom struggle, were reconstituted into the hard-core of the newly-created BDR. The force at the lower and middle levels has grown around this hard core. It now has a  strength of around 70,000 and its role is mainly trans-border security in times of peace. In Bangladesh territory bordering India, which has been the hotbed of the activities of the HUJI and where many of its training camps are located, the BDR is responsible for security. Its role in this regard often brings it into contact with the HUJI and other jihadi elements.

The unfriendly attitude of sections of the lower ranks of the BDR to India became evident from the savage manner in which 15 members of India's Border Security Force (BSF) were  abducted, tortured, killed and their bodies mutilated beyond recognition  by elements from the BDR in April, 2001. Sheikh Hasina, who was  in power at that time too, did not or could not take action against those responsible for this savagery despite her professed friendship for India. The BD Press had quoted the then  BD Foreign Secretary, Syed Muazzem Ali, as telling journalists at Dacca on April 20, 2001, as follows: "The border force has standing responsibility of protecting the frontier from any external attacks.  BDR are there to repulse any attack on the country’s frontier. There are some situations when decisions are taken instantly.  It does not require to send file to Dhaka, get order and then start firing.  It is the charter duty of BDR to protect our frontier from any attack on our border.  If question of war comes, then the orders from top level may come." He thus tried to justify the  action by the BDR.

The mutiny  and the consequent confrontation between the junior elements of the BDR and the Army has placed Sheikh Hasina in a tricky situation. The Army seems determined to act against the BDR mutineers and crush their revolt by using tanks and other heavy weapons against them. It should be able to crush them in Dhaka and other big towns. Its ability to do so in the rural areas and particularly near the border with India remains to be seen. If the mutineers realise the lack of wisdom of their action and surrender without further resistance, the situation may be controlled. If they put up a resistance in the rural areas, many HUJI and other jihadi elements might join them in the hope of exploiting the situation to their benefit.

In the past, the BDR had remained loyal to Sheikh Hasina and other political leaders. They preferred to depend on the police and para-military forces for their personal security than on the Army, which they distrusted. Now she has no other option but to back the army in its confrontation with the mutineers and authorise it to take whatever action it considers necessary to quell the mutiny. The political fall-out of the confrontation could be unpredictable for her government. The ultimate beneficiaries of any political instability resulting from it could be the jihadis.

The developing situation has to be closely watched by India and the rest of the international community.