In the hitherto Hindutva-free Assamese heartland, the buzz is that the BJP will sweep the assembly elections in 2016. 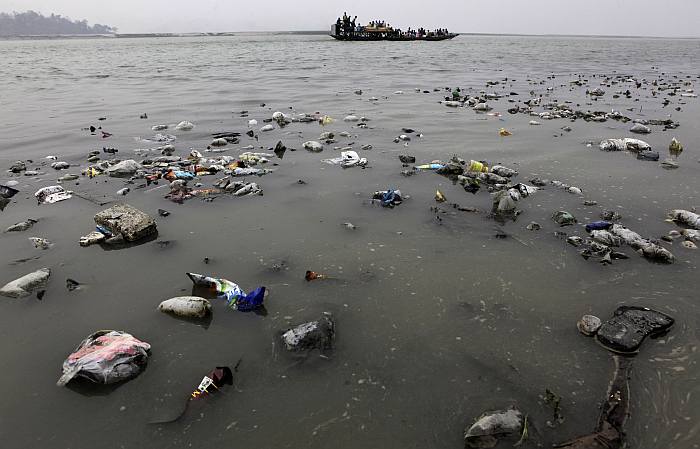 How Green Was My Valley

It was raining in Delhi when I left for Assam, where the climate seems to have changed for the worse. Monsoon rains are deficient now and in the winter there is no rain at all. Over Guwahati, the aircraft descends through a brown haze that looks thick enough to stand on. The chars on the Brahmaputra now seem to have pucca houses, demonstrating that the inhabitants no longer fear the river's periodic wrath. In Tezpur my mother's lawn has turned brown and every day she wages a hopeless war against dust. Tea bushes in a nearby estate where I walk every morning are wilting. My friend Gautam who owns a tea garden near Sonari in Upper Assam is digging tube wells; he says any planter talking about irrigation even 5 years ago would have been laughed at. And it is still raining in Delhi when I return a week later.

Four Lanes at Last, But…

Four-lane work on the portion of the East West Highway between Guwahati and Nagaon is nearly complete, bar the odd bridge. Speeds in excess of 100 kmph are the norm now, unthinkable on the old single lane NH 37 that traverses the Brahmaputra Valley from end to end. But wider, smoother roads bring new problems — wrong side drivers have the terrifying habit of sticking to the median and appearing suddenly round a bend seconds away from a head-on. Their brethren in Punjab, Haryana and Rajasthan now know that is wiser to stick to the shoulder so that they are visible from afar to right siders.

The Politics of Identity

Apparently Clause 6 of the Assam Accord requires the proper definition of who exactly is an Assamese before it can be implemented (30 years and counting). So these days various organisations and intellectuals are tying themselves into knots of ever increasing complexity to define the undefinable. Briefly: the All Assam Students Union says those who figure in the National Register of Citizens in 1951 and their descendants are Assamese while the Assam Sahitya Sabha says it should be those whose first, second or even third language is Assomiya. Not to be outdone the Assam Sanmilita Mahasangha says that those whose mother tongue is not Assomiya but use it as a link language are also Assamese. And writer Dhirendra Nath Chakraborty says it doesn't matter when everybody came to live in Assam or what language they speak, as long as they have "assimilated and absorbed" the local culture. Meanwhile the rest of India doesn't give a damn and the gap in terms of development & prosperity keeps widening.

Having grabbed the political space abdicated by the now widely discredited AGP and stunning everyone by grabbing half a dozen Lok Sabha seats in the hitherto Hindutva-free Assamese heartland, the buzz is that the BJP will sweep the assembly elections in 2016. Fearing this incumbent Congress CM Tarun Gogoi bared his populist soul in his government's final budget, gifting a 50% power subsidy to BPL families among other goodies. What could dim the BJP's prospects? Why, Narendra Modi getting too friendly with Bangladesh, of course. And if he does logical and sensible acts like exchanging adverse land possessions on the Assam-Bangla frontier.

Twenty-five years ago my sister was mocked in the Tezpur market by youngsters our age for wearing jeans — I believed Tezpur's descent into conservatism was complete when ten years ago colleges imposed salwar kameez uniforms on their girl students. Since then I have used the number of women out and about in western wear as a rough gauge of the coolness quotient of a town or city. Of course jeans and t-shirts are no longer frowned upon in Tezpur but Guwahati is a nice surprise; a few women in LBDs during an evening of song and dance at the Gymkhana Club elicit neither comment nor unwelcome attention.

A school called St. Claret near Guwahati Airport had me furiously googling for a connection to the type of Bordeaux that British toffs like to quaff. Alas Anthony Mary Claret was a 19th century Catalan Archbishop from the Barcelona area, canonised in 1950. The missionary order he founded runs quite a few schools in the Northeast.