'As A Director It's Important To Choose Contemporary Issues'

It's time for the dream merchants to touch base with reality, feels Shyam Benegal. 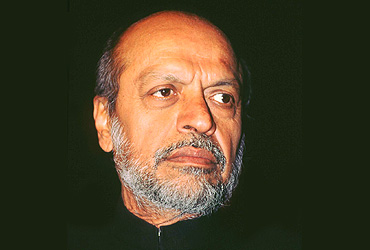 He called his first movie Ankur, an experiment with parallel cinema, a label which remains stuck with Shyam Benegal and his works till date. A director who successfuly bridged the gap between art and commercial films, Benegal's latest venture Zubeida (which experimented with the lives and times of the Indian royalty) did not actually set the box office on fire but the veteran filmmaker is not down. Neither is he out. Benegal recently finished a documentary for the state-owned National Thermal Power Corporation (NTPC) and now wants to stay for more than a month in the sylvan surroundings of Mussourie working on a script with Ruskin Bond and Victor Banerjee. Benegal refuses to talk about his forthcoming venture but admitted it would be difficult for him to move away from his stereotype blend of star cast and the trademark tinge of art. During a visit to the Indian Capital, Benegal admitted Bollywood needs to move away from the masala typecast and make films which are closer to the masses' hearts. "It's time for the dream merchants to touch base with reality," Benegal told Outlook in an interview. Excerpts:

Why do you think Zubeida did not exactly make it to the box office?
Ask the critics. Honestly, you should ideally ask them. So far as I am concerned, I feel the theme was rightly in place. And it was because I had a wonderful script to work with. And if people are expecting me to distort history and make movies like Dharam Veer, it's their problem. I will tell you more about why such reactions are flooding the market. Many still feel that the Indian royalty is a lot of pomp and glamour and do not realise that glamour was reduced considerably after the privy purses were tightened. If at all there was a problem, it was there. Nothing else.

What about Manoj Bajpai? Many felt Manoj Bajpai was also a misfit ...
Has anyone said that? Who's blaming Manoj Bajpai? I think he did a wonderful role. When will people in India move out of their habit of stereocasting actors? Remember what happened with Sholay? It made things great for the director, Ramesh Sippy, and caused tensions for the villian, Amjad Khan, because expectations from Gabbar Singh rose sky-high. And this is precisely what's happening with Manoj. Once a don does not mean he has to specialise in such roles only. He was a police officer in Shool and that was a nice role, don't you agree? And besides, why can't he be romantic? There were shades of such romance in Satya and Shool as well. And if I want him to be in the role of a maharaja, does that mean he must wear traditional clothes? This is really stretching it too far.

Why do you think too many flops are rattling Bollywood?
Well, frankly, I see this as a natural phenomenon. It's like the tides of the sea. With highs and lows. And this trend will be over. After all, the economy is also not on a high. It's reflecting everywhere. And please do not look at the actors and actresses. And it's not just about acting and directing. Or for that matter, producing. There are many things that make a film. Where is the good music a film looks for? Where are the good scriptwriters? Remember Kundan Shah? And his Jane Bhi Do Yaro? He had the world in splits. But look at his latest venture which has not been able to make any mark. Not even in the metros. And why do you know this has happened? This is because Kundan -- otherwise a classy scriptwriter -- has himself admitted that he has found very little time to work on the script.

You were the first one to blend commercial cinema with art. Do you find many following your footsteps?
There have been directors who have been making films on similar lines. But if you ask me about my trademark passion, I work primarily on two issues -- there is the creativity aspect on one side and commercial on the other. And I always look for a perfect blend. This is because people must not appreciate the film for its artistic value but must also appreciate the commercial aspects of the same. I mean the songs, action and dances. It must be exciting to watch. Imagine making a boring Kalyug with some popular stage performers (who normally make art films)? Do you know I got employees of Premier Padmini and NDDB to act in my films for a grassroot feeling? And at the same time, I never compromised on the star value of my product. As a result, my comfort level has been fine with one and all -- Shashi Kapoor, Victor Banerjee, Rekha and Supriya Pathak on one hand and Smita Patil and Shabana Azmi on the other.

Sorry for this digression but why this continuing identity crisis and tension between art, commercial and parallel cinema, especially during the annual National Film Awards?
Please keep me out of this. Please.

You appear confident in such experiments with art and commercial aspects of a movie, yet you played it relatively safe in the beginning and opted for movies which were financed by state-owned organisations. Why?
May be I was afraid that not many will buy such films. Perhaps I wanted to play safe. Perhaps yes. I started initially with ad films. Then I made Ankur in the early 70s after I resurrected a decade-old script. And it was at that time I felt state-funding was a good way to handle a new theme like parallel cinema, primarily because such movies are more of an experiment and need to be handled carefully. One cannot bungle with finances. So I got the National Dairy Development Board to fund Manthan. Then came the publicity wing of the Left Front government in West Bengal which funded Aarohan and the Handloom Co-operatives which sponsored Susman. I got the Indian Railways to fund Yatra and Doordarshan to fund the 53-episode serial Bharat Ek Khoj. And now this documentary (Tamaso Ma Sadgamaya) for National Thermal Power Corporation.

What works as a sole motivating factor in your films?
I work on very strong issues and peoples' rights, especially human rights. Basically, there are two underlying themes one will always find in my films. I love to talk about rights which people love to express while facing a variety of problems, both at offices and homes. If you have seen some of my recent movies like Sardari Begum, you will understand what I mean. I have always dealt strongly with issues like women's rights. And as a director, I feel it's important to choose contemporary issues which revolve more around reality. So the audience appreciates it much more easily. And frankly, I am not for those dream sequences. For example, if you had followed Bharat Ek Khoj, you would have been zapped on seeing the costumes in Ramayana. I love reality. And my main concern is to uphold the rights of individuals, both men and women. It's basically about tackling oppression.

But I think that's an irony. Isn't it? Your movies are not targetted at the lower class but still has strong tones about them. Why?
Can I tell you a home truth? And it's a reality. Believe me. Today, a large section of the mainstream commercial cinema has been -- for quite sometime -- routinely using social issues as their central themes. And people are watching such movies in the cities. And also in the villages. My films appeal to everybody. They do not make any distinctions.

Why is it that one finds you shying away from comedy?
On the contrary, I have always loved comedies. I love watching such movies. But in Bollywood, who will work on a script like that? Can someone give me such a script? On the lines of what I expect out of a Woody Allen, perhaps? Does Bollywood have comedians? We have a handful doing comic roles. They are buffoons. I cannot make them do something which the audience will love to watch.

Television has grown stupendously in the last decade, especially to an extent that many feel it's encroaching on Bollywood. Is that a deterrent?
Certainly not. On the contrary, it makes me feel happy. There are many who can explore the medium. And today, they have a choice. They need not depend on the fancies of Doordarshan. They can work on a good script and fresh star cast and make serials which will eventually fetch good TRPs. Indian cinema need not worry the idiot box. In fact, television -- on the contrary -- has continued to aid the silver screen with a steady stream of actors and actresses.

What next?
Off to Mussourie with my wife and work on a script.

Tell us about it, please ...
I cannot disclose that now.

The Fall Of A Director