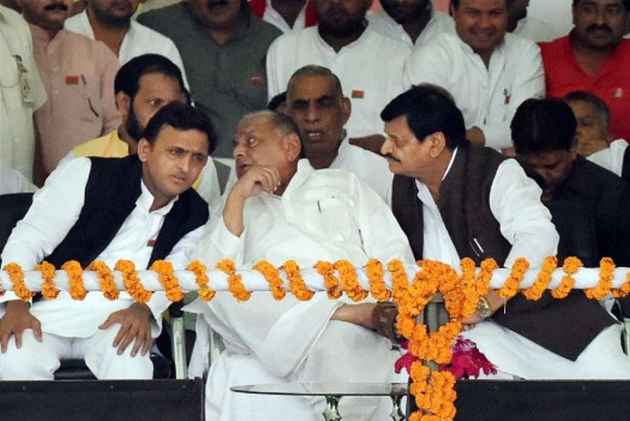 Samajwadi Party chief Akhilesh Yadav is likely to be re-elected as the party's national president for five years at the SP national convention here tomorrow.

Besides election for the post of the SP national president in which Akhilesh is likely to be re-elected and amendment of party's constitution to extend the tenure of the party chief, the other highlights of the meetings will be passage of political and economic resolutions, SP sources said.

If Akhilesh remains at the helm for five years, the 2019 Lok Sabha and state Assembly elections in 2022 will be held under his presidentship.

The state president's tenure has already been extended by a similar period by the state executive and Naresh Uttam was unanimously re-elected to the post for five years.

Mulayam and his comrade-in-arms Shivpal Yadav were conspicuous by their absence at the state meet in Lucknow on September 23.

All eyes will be on whether SP patron Mulayam Singh Yadav attends the event, especially in the light of his son Akhilesh meeting him personally in Lucknow last week to extend an invitation.

Akhilesh, who is involved in a feud with Shivpal Yadav, had recently dropped enough hints that there was no likelihood of any reconciliation with his warring uncle when he cautioned partymen to beware of "fake samajwadis".

"Beware of 'banawti' (fake) samajwadis. They have tried to stop the samajwadi andolan (socialist movement) many times. They succeeded in one conspiracy as a result of which we could not form government again in the state.

"But it has opened the eyes of samajwadis. Now they will not succeed," he had recently said in Lucknow in an apparent attack on Shivpal, though he did not take his name.

While Akhilesh (44) maintained that he enjoyed the blessings of his 77-year-old father, Mulayam on his part corroborated it days later saying, "My blessings are with him (Akhilesh Yadav) as he is my son, though I don't agree with his decisions."

"Baap bete me kab tak matbhed rah sakta hai, koi nahi keh sakta" (No one can say for sure how long differences will remain between father and son)," he had said.

Mulayam had ruled out forming any new party "as of now", putting a lid on speculation that ahead of the SP national executive meeting he could part ways with the party he had formed 25 years ago amid the continuing battle for supremacy in the party.

Both Mulayam and Shivpal have been sidelined by Akhilesh ever since he snatched the crown of SP chief from his father at the party's national convention here on January 1.

Shivpal had announced in June that he would float the Samajwadi Secular Front "to fight communal forces".

In a series of tit-for-tat actions, Mulayam had last month replaced Akhilesh-loyalist Ram Gopal with Shivpal Yadav as the secretary of the Lohia Trust.

Taking full control of the party after being crowned as its head and alloted the 'bicycle' symbol by the EC on January 16, Akhilesh has been going full throttle consolidating his grip over the party.

The key Lok Sabha by-elections to be held in Gorakhpur and Phulpur (the seats vacated by Chief Minister Yogi Adityanath and his deputy Keshav Prasad Maurya) will give the SP a chance to gauge which way the wind is blowing months after it faced a rout in the Assembly polls.

The upcoming bypolls might come up for discussion at the Agra meet, an SP insider said, adding the two elections were of special significance.

Akhilesh has already said if results of the elections were in "our favour, it will give a message not only for the 2019 (Lok Sabha polls), but also for the 2022 (assembly polls)."