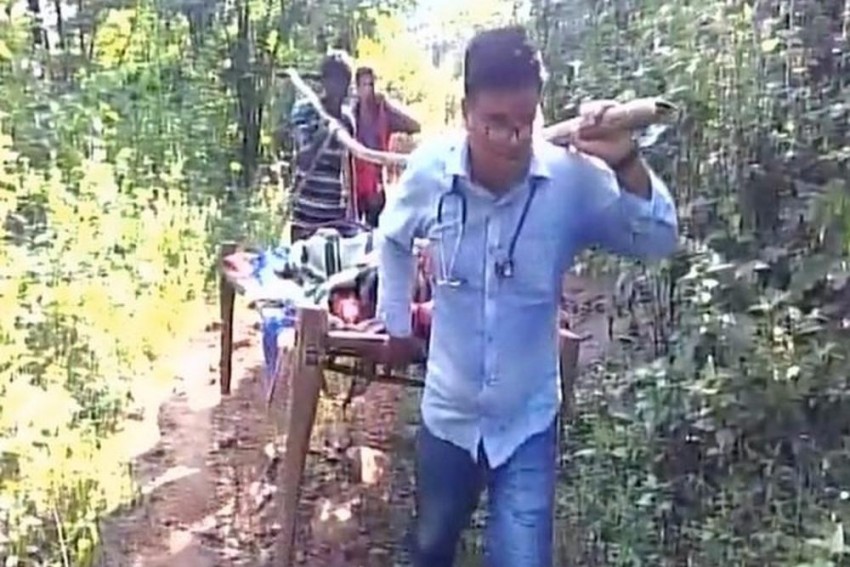 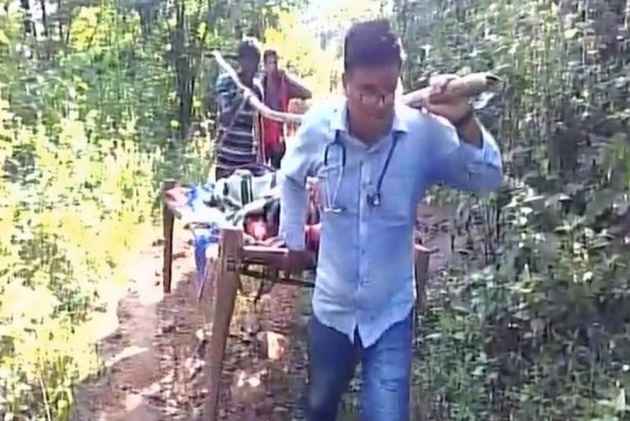 In an incident that instills one’s faith in humanity again, Dr Hota carried a tribal woman, Subhama Marse who was bleeding profusely post child-birth, for 10 km to the nearest Public Health Centre (PHC) in Papulur.

On October 31, after getting a call demanding his urgent attention, when he visited Marse’s village, her condition was critically unstable. “She had to be taken immediately to hospital. We had no other option,” he told Outlook as he narrated his three-hour trek through the forest carrying the bleeding woman on a cot.

Marse, is definitely not the first patient he shouldered to the hospital. Though just a year, Dr. Hota’s stint as a medical practitioner in Maoist hinterland has been exemplary. “There have been cases of poisoning in the jungle where the patient has to be rushed immediately to hospital or take the old and elderly for that matter. It is not possible for them to walk through the jungles,” he told Outlook.

Nestled amidst deep forest, people living in these remote villages hardly have any access to even the state –provided medical facilities. Malkangiri is a small district that continues to be a breeding ground for “Maoist activities”. The working condition is very hostile; he says adding that even emergency facilities like Ambulance services cannot go beyond a certain point.

He recalls carrying other patients on other occasions from Muraliguda, Kapatuti, Sintagunal, Guralar villages to the Public Health Center (PHC) in Papulur where he has been posted as medical in-charge since March 31.

“Being a doctor is a 24X7 job here,” says Hota who lives in a small quarter in the hospital compound. Always ready for his services, this doctor talks about initiating thing on his own. “Somebody has to begin at one point of time.”

Hota’s posting to Malkangiri was a challenging job in itself as the health centre lacks even the basic amenities. Highlighting the plight and terror in the area, he tells Outlook that the post was vacant for a long time because nobody would take up a posting there.

“There has just been one doctor here in maybe 2008 or 2011 who fled within a day of duty after facing the rough conditions,” he says.

The 31-year-old doctor had to climb a rocky terrain to become what he is. “I am a doctor only because of my mother ,” he reminisces as he delves into a story that dates over a decade ago. While growing up in another small district Balangir, Hota witnessed apathy among doctors.

“I had taken my mother, who was down with jaundice then, to a local hospital. That trip to hospital was about to change my life forever,” he said. Hota, then only a teenage student, saw a government doctor extracting money from a helpless tribal man for opening his stitches. “I was shocked to see a doctor charging Rs 200 from an ailing man, leaving him penniless. I was pained as I saw him breaking down,” he said that what he saw there changed his outlook towards life in general. It was this moment that decided the course of his future.

“My mother took a promise-‘Be a doctor and treat the needy’. I am just keeping that.” Dr. Hota’s hardwork and dedication did not go unrecognized. On August 15 this year, he was felicitated by the district collector in the parade ground with the best doctor award.

On Tuesday the Odisha chief minister Naveen Patnaik had felicitated Hota for his “dedicated service in healthcare.”

“Dr Hota has become an inspiration for all by his exemplary display of commitment and selfless service to the people. Walking the extra mile to ensure healthcare for the needy in remote Malkangiri villages and saving two valuable lives of a mother and a child, he is a true representation of the medical fraternity in its role as a life saver,” said Patnaik in a Facebook post.

Outlook's Agony Aunt: Dear Shree, I Am Losing My Sex Drive After Having Kids