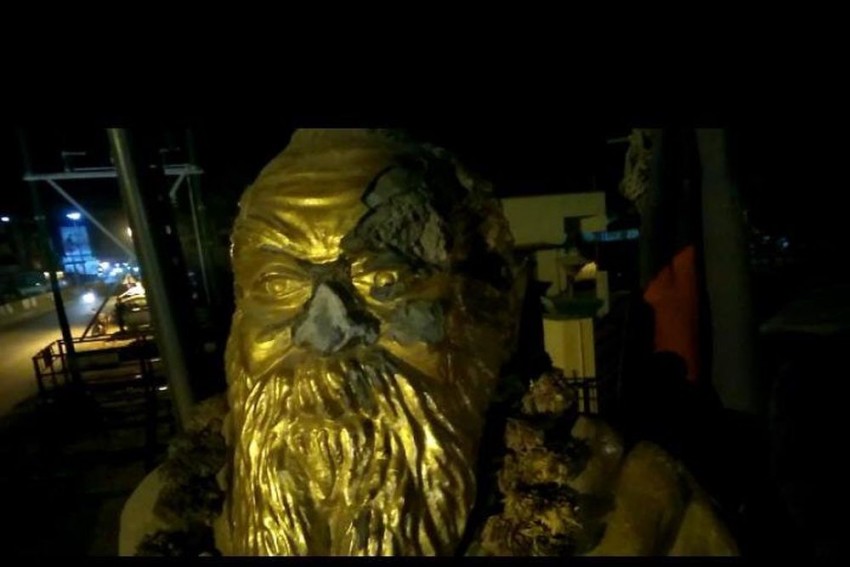 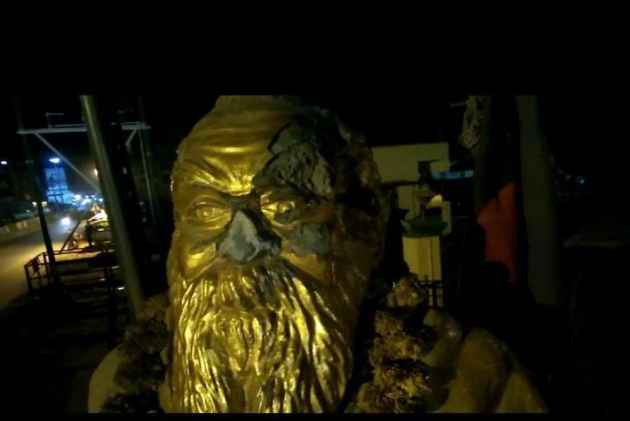 Hours after Tamil Nadu BJP leader H Raja and BJYM vice-president SG Suryah threatened to raze the statues of Periyar, the founder of  Dravidian movement, across the state, a group of men vandalised a Periyar statue at a municipal corporation office in Tamil Nadu's Vellore on Tuesday evening.

I strongly condemn the way Anti Social Elements Which has vandalise The Social Reformist Shri EVR Periyar Statue. AT Tiruppattur. Vellore Dist. Yesterday Bring down Lenin's statue with a bulldozer. This is not the way people function in a democracy. Setting a wrong precedence. pic.twitter.com/9I7dswF2ds

According to reports, the statue of Erode Venkatappa Ramasamy Naicker, commonly known as Periyar,  located inside the Tirupattur corporation office, was targeted around 9pm. The glasses and nose of the statue were damaged.

The duo have been arrested, the police said, adding that while Muthuraman was suspected to be a BJP worker, Francis is believed to be a CPI activist.

Raja and Suryah had threatened to demolish Periyar statues after a statue of communist icon Lenin was pulled down by BJP supporters in South Tripura’s Belonia district.

In a Facebook post, which was later deleted, Raja called Periyar a “caste fanatic”, while Suryah tweeted saying “Can’t wait for the fall of EV Ramasamy statues in Tamil Nadu”. While the Bharatiya Janata Yuva Morcha leader tweeted with a picture of Lenin’s statue being pulled down by people in Tripura.

BJP successful completed the fall of Lenin in #Tripura ! Can’t wait for the fall of EV Ramasamy statues in Tamil Nadu. Good Night all. pic.twitter.com/36S1fsPfWZ

Reacting to Raja’s post, DMK working president MK Stalin said the BJP leader should not be allowed to touch Periyar’s statue and if he does so, the state government should jail him.

Periyar was a rationalist, one who believed that caste should be eradicated, and advocated for women’s rights. He is also credited with starting the Self-Respect Movement, in order to achieve a society where disadvantaged castes had equal rights. Both the main political parties in Tamil Nadu, the DMK and the AIADMK owe their origins to this movement. He launched the idea of a separate Dravida Nadu, an idea that was later modified to Tamil Nadu.

In October last year, Raja drew flak for posting on Twitter a photo of actor Vijay's voter ID card and official letterhead, describing the popular star a Christian and his full name is C Vijay Joseph. That Raja asserted, is the reason for the actor's latest film Mersal containing dialogues critical of new national tax GST, introduced by the BJP government at the Centre in July this year.

Days after the Left Front was voted out of power in the state, Tripura CPI(M) district secretary Tapas Datta said the five-feet-tall fibre glass statue, which was unveiled by the party's politburo member Prakash Karat a few months back, was pulled down allegedly by BJP workers on Monday at College Square in Belonia, about 110 kilometre from Agartala.

Superintendent of Police of South Tripura district, Monchak Ipper said the driver of the JCB excavator machine was arrested and later released on bail.

The statue would be handed over to the authorities of Belonia Municipal Corporation on Tuesday, the SP said.

In the recently concluded Assembly elections, the BJP demolished the Left citadel in Tripura, winning a two-third majority with its ally the Indigenous People's Front of Tripura (IPFT).