A Wall Of Silence

Dr Binayak Sen's incarceration is meant to silence dissent, and criminalize democratic space. It is meant to absorb all our attention so that the stories of the hundreds of other nameless, faceless people - those without lawyers, without the attenti 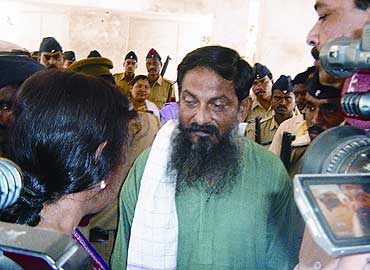 Dr Binayak Sen has been in prison for 22 months, arrested under one of India’s most draconian laws, the Chhattisgarh Special Public Security Act. This Act has such a vague, diffused definition of ‘Unlawful Activity’ that it renders every person guilty unless he or she can prove their innocence. Dr Sen’s bail application was dismissed twice, both times at the very outset, by the High Court of Chhattisgarh and by the Supreme Court of India. On neither occasion was there a discussion on the merits of the case. On the 2nd of December 2008 the High Court of Chhattisgarh once again turned down his bail application, without a discussion on the merits of the case, saying that there had been no change in circumstances.

But there has been a change in circumstances. To begin with, the charge-sheet has been filed. 64 witnesses have been examined by the prosecution. Not one of them has provided legally admissible evidence to support the accusations in the charge-sheet. Even the jail officials, the Superintendent and the Jailer, who were called as witnesses by the Prosecution, have ruled out the possibility of Dr Sen being a carrier of letters given to him by Narayan Sanyal (said to be a senior Maoist leader) who is a high security prisoner in Raipur Jail. (It should be mentioned here that Narayan Sanyal has a medical condition which requires surgical intervention from time to time, which is why the jail authorities permitted Dr Sen to visit him regularly.)

That Dr Sen should continue to be in prison when the case against him has almost completely fallen through says a great deal about the very grave situation in Chhattisgarh today. There is a civil war in this state. Hundreds are being killed and imprisoned. Hundreds of thousands of the poorest of the poor are hiding in the forests, fearing for their lives. They have no access to food, to markets, to schools or healthcare. The thousands who have been moved into the camps of the government-backed peoples’ militia, the Salwa Judum, are also trapped in sordid encampments, which have to be guarded by armed police. Hatred, violence and brutality is being cynically spread, pitting the poor against the poorest.

There is very little doubt that Dr Sen is in prison because he spoke out against this policy of the State Government, because he opposed the formation of the Salwa Judum. His incarceration is meant to silence dissent, and criminalize democratic space. It is meant to create a wall of silence around the civil war in Chhattisgarh. It is meant to absorb all our attention so that the stories of the hundreds of other nameless, faceless people - those without lawyers, without the attention of journalists - who are starving and dying in the forests, go unnoticed and unrecorded.

Tomorrow is World Health Day. Dr Binayak Sen spent the best part of his life working among the poorest people in India, who live far away from the government’s attentions, with no access to clinics, hospitals, doctors or medicines. He has saved thousands from certain death from malaria, diarrhoea, and other easily treatable illnesses. And yet, he is the one in jail, while those who boast openly about mass murder are free to go about their business, and even stand for elections.

What does this say about us? About who we are and where we’re going?