A Professor Of Poetry

Amit Chaudhuri and Peter D McDonald explain why they took the initiative in nominating Arvind Krishna Mehrotra for the position of Oxford's Professorship of Poetry, the most high-profile in British poetry after the laureateship 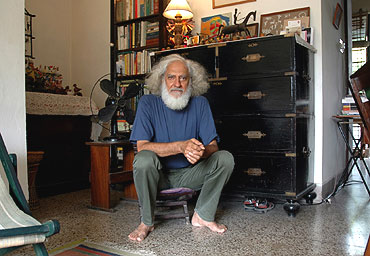 Arvind Krishna Mehrotra is the first poet from this part of the world to be nominated for Oxford's Professorship of Poetry, the most high-profile in British poetry after the laureateship, and, for many, a more serious position than the latter. Former Professors include Matthew Arnold, W H Auden, and Seamus Heaney. Mehrotra’s supporters include some very distinguished writers and scholars from every part of the world, such as Tariq Ali, Amit Chaudhuri, Tom Paulin, Charles Taylor, Toby Litt, Wendy Doniger, Adil Jussawalla, Shahid Amin, Pratap Bhanu Mehta, and various others. Charles Taylor, one of the most considerable of living philosophers, has said: 'I see what a boon it would be if Mehrotra were elected professor of poetry. The issues he raises are so central to language, and so little explored or understood - although often evoked.'

See this page on the Oxford University website to do with details of the professorship and voting. Voting takes place on 16th May.

A few months ago, Peter D McDonald and I decided to nominate Arvind Krishna Mehrotra to Oxford's Professorship of Poetry -- clearly not for nationalistic reasons, or even for reasons to do with prestige, but because of our admiration for the work of this remarkable poet-critic, and its significance to literary discussion today. This is the first time that a poet from this part of the world (India; probably Asia) is being nominated for this very significant position. The 300-year-old post has been held by poets like WH Auden, Paul Muldoon, Matthew Arnold, and Seamus Heaney, and, most recently, by the critic Christopher Ricks.

Arvind Krishna Mehrotra is one of the leading Indian poets in the English language, and one of the finest poets working in any language. Influential anthologist, translator, and commentator, he is a poet-critic of an exceptionally high order. We believe that Mehrotra has much to say of value - of urgency - on the matter of multilingualism, creative practice, and translation (in both its literal and figurative sense), issues that are pressingly important in today's world. He is not an easy 'post-colonial' choice, for he emerges from a rich and occasionally fraught world history of cosmopolitanism; but he is proof - as critic and artist – that cosmopolitanism is not only about European eclecticism, but about a wider, more complex network of languages and histories.

The paragraphs below are taken from the Vintage/ Picador Book of Modern Indian Literature:

Arvind Krishna Mehrotra was born in the year that the nation-state we presently call 'India' also came into being. According to some, it was a year of portents, of angels and monsters with peculiar gifts coming into the world. One wonders how Mehrotra fits in with that creation-myth, born as he was in Lahore, brought into India in the time of Partition in a train when he was a few months old, and growing up in Allahabad, a colonial centre of education and culture already in decline, the son of a dentist. His childhood, unlike Saleem Sinai's, was not immediately prophetic in any way, but was outwardly tranquil, inwardly agitated by the imagination, and in location suburban, as these lines from his poem 'Continuities' reveal:

At seven-thirty we are sent home
From the Cosmopolitan Club,
My father says, 'No bid,'
My mother forgets her hand
In a deck of cards.
I sit on the railing till midnight
Above a worn sign
That advertises a dentist

As a young man, he discovered, with some friends, Corso, Ferlinghetti, Ginsberg, and the French Surrealists, and, negotiating these paradigms, made it his purpose, in his poetry, to renew and to impart a fresh, sometimes mysterious, sometimes threatening, gleam to the 'worn signs' of which a suburban existence in a declining colonial city is composed. His latest book of poems is the The Transfiguring Places (1998), and he has also produced an excellent anthology of Indian poetry in English.

Mehrotra has emerged as a hyphenated mutation, the poet-critic, of exceptional quality, in a country among whose several unremarked calamities is the unhappy state of its criticism; in this, at least, he is a miracle. He teaches us, as in 'The Emperor Has No Clothes', which began as a riposte to a fellow-poet on the subject of A. K Ramanujan's poetry, and developed as a subtle exploration of the issues of bilingualism, translation, and 'Indianness' in contemporary Indian English poetry, that it is possible to write criticism of a high order about Indian writing in English without either entirely abandoning the world of 'English literature', or fully belonging to it, or without situating oneself exclusively in the politics of postcolonial theory.’

Also do look at a selection of Mehrotra's poems from 1976 to the 2000s, from the early, surreal 'The Sale', with its unique account of world history as memory ('French surrealism was one of the ways available to me of escaping the King's English,' Mehrotra has said) to the other poems with their characteristic but always unexpected mixture of luminosity, transfiguration, and magical compression. There are also selections from the wonderful new poems, about vanished historical figures, about reminiscences and transmutations of a post-Independence suburban existence.

These websites also offer a small selection of some of the poems:

This link to Smith College contains both a biographical note and further links to some poems, including the excellent ‘Continuities’