A Lament For Lahore

May its lights always shine!

More from C.M. Naim
View All

“Once I, ‘Ali bin ‘Uthman al-Jullabi, found myself in a difficulty. After many devotional exercises undertaken in the hope of clearing it away, I repaired—as I had done with success on a former occasion—to the tomb of Abu Yazid, and stayed beside it for a space of three months, performing every day three ablutions and thirty purifications in the hope that my difficulty might be removed. It was not, however; so I departed and journeyed towards Khurasan. One night I arrived at a village in that country where there was a convent (kh?naq?h) inhabited by a number of aspirants to Sufism. I was wearing a dark-blue [robe], such as is prescribed by the Sunna; but I had with me nothing of the Sufi’s regular equipment except a staff and a leathern water-bottle. I appeared very contemptible in the eyes of these Sufis, who did not know me. They regarded only my external habit and said to one another, ‘This fellow is not one of us.’ And so in truth it was: I was not one of them, but I had to pass the night in that place. They lodged me on a roof, while they themselves went up to a roof above mine, and set before me dry bread which had turned green, while I was drawing into my nostrils the savour of the viands with which they regaled themselves. All the time they were addressing derisive remarks to me from the roof. When they finished the food, they began to pelt me with the skins of the melons which they had eaten, by way of showing how pleased they were with themselves and how lightly they thought of me. I said in my heart: ‘O Lord God, were it not that they are wearing the dress of Thy friends, I would not have borne this from them.’ And the more they scoffed at me the more glad became my heart, so that the endurance of this burden was the means of delivering me from that difficulty which I have mentioned; and forthwith I perceived why the Shaykhs have always given fools leave to associate with them and for what reason they submit to their annoyance.”

This man, Ali son of Uthman, was born in Hajwair or Hujwir and grew up in Jallab or Jullab, which were either two neighborhoods in the city of Ghazni or two villages outside it. His date of birth is not known, though we know in his youth he studied with scholars and sought the company of prominent Sufis of his time, and that he journeyed extensively for many years, from Syria to Azerbaijan and from Central Asia to India, not to mention Iraq and Iran that he must have crisscrossed several times. We also know that he left this world to join his maker and the object of his devotion in the Seventies of the 11th century, most likely in the year 1072 A.D. What we are totally certain of is that his death occurred in Lahore, for that is where his grave is, enshrined now in the hearts of millions as the D?t? Darb?r, the “Court of the Giver.” Legend has it that when Shaikh Mu’inuddin Chishti was on his way to Ajmer from Sijistan in the 13th century, he stopped at Lahore and spent forty days meditating at the grave of Ali bin Uthman. Consequently, he received such bounties of spiritual wealth that he called him Ganj-Bakhsh, “Bestower of Treasures,” in a verse now inscribed across the gateway to his grave.

We are also equally certain that he wrote a magnificent book on Tasavvuf, calling it Kashf-al-Mahj?b (“Revelation of the Veiled”). It is always called the first great treatise in Persian on Islamic Mysticism; it is also one of the foremost books on the subject. In fact, for the lay reader, it may well be the best book on Tasavvuf in any language. He wrote some poetry, too, but made the mistake of giving the collection to a friend, who never gave it back. Much worse, the wretch published the collection after putting his own name on the poems. The same happened another time too, when someone borrowed the draft of an earlier work on Tasavvuf, and then passed it around as his own. And so—the author cheerfully confides—when he wrote his magnum opus he made sure to put his name not only at the beginning but also within the text at several places. Now who would not seek and receive guidance from such a forthright man?

Legend has it that one day his Sufi mentor ordered Ali bin Uthman to rush to Lahore. He was perplexed at the command, for a co-disciple was already there. However, as befits a true disciple, he obeyed his master. When he reached outside the walls of the city, he saw that the burial procession of that colleague was coming out of the gates. And so he marched into the city, settled in, and did what Sufis are supposed to do: bring instruction and solace to the city’s common people. In the book, however, he indicates he had come to the city under some duress, did not like the company he found, and sorely missed his books that had been left behind in Ghazni. Though it is certain that he wrote his treatise in Lahore, it contains no indication of any intimate contact with the local people, Muslim or non-Muslim. In fact, he expresses much unhappiness at the fate that had kept him there. But the people of Lahore must have taken to him, for as years turned into centuries he became their pride and glory. When the Mughal prince Dara Shikoh visited “the great and spiritually blessed city” early in the 17th century, he also went to the grave of Ali son of Uthman to pay homage to the author of the book he believed was “the perfect teacher for those who seek.” He discovered that thousands of people came there for the same purpose every Thursday. He also learned that if anyone circumambulated the shrine on forty Thursdays or, for that matter, on forty consecutive days he could be sure to have all his needs met. 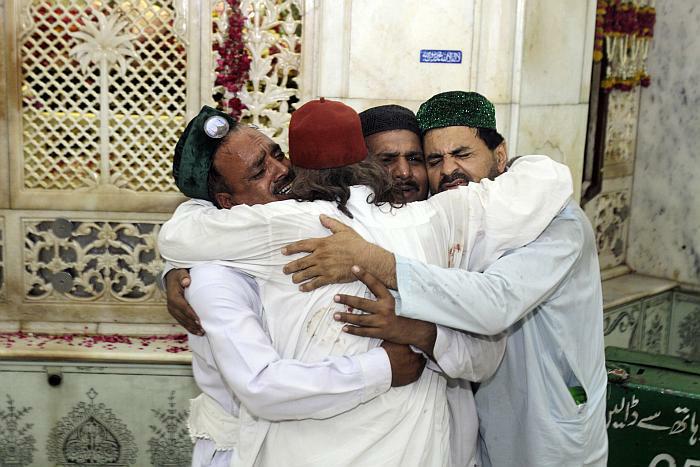 Last Thursday, the first day of July, 2010, which was the 18th day of Rajab, 1431, a few thousand men, women, and children must have come to the shrine all day long and in the evening, as they have for centuries. Many must have come for the fortieth time, joyfully looking forward to having all their needs met by the grace of God, as they believed deep in their hearts. But some, it turned out, were not so fortunate. Three criminally insane men and their untold masters changed everything. Now more than forty devotees of D?t? rest in graves, and close to two hundred lie in hospitals badly injured. And hundreds more will never forget what they themselves felt last Thursday night or what they watched happening around them as an evening of bliss turned into a nightmare. In a few days another Thursday will come. Will the survivors return to the “Court of the Giver” that day? I hope they do. If they don’t, they will miserably disappoint the man they love, the man who could find a tool to perfect himself in chewed up melon skins thrown at him by some ignorant wretches.