A deep cleave in the ideologies of the PDP and BJP was evident before and after they came together to form government in J&K three years ago. When the saffron party sensed Hindu-majority Jammu being slighted vis-a-vis Kashmir under its rule, bosses took the call—and the rule ended. 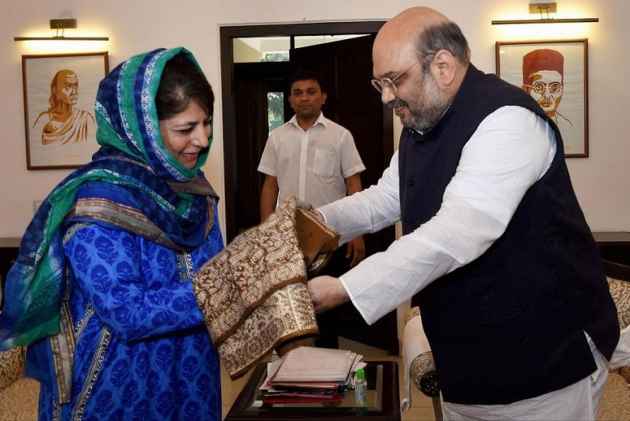 Three years ago, the Jammu and Kashmir state flag was seen fluttering in front of Prime Minister Narendra Modi, as PDP founder-leader Mufti Mohammad Sayeed took oath as the chief minister at a momentous Srinagar function. A former Congress leader, the veteran politician had been a proponent of “healing touch” to the people of the Valley, what with his party driven by the idea of self-rule and not autonomy.

The pictures of Modi alongside the deep-red J&K flag with the plough symbol and three stripes that flashed on TV screens and print media of that ceremony on March 1, 2015 was an anti-thesis of the PM’s saffron party with which the PDP had entered into a post-poll tie-up to rule the troubled border state. It was a far cry from the BJP’s ideological mooring in the region tracing to the days of the Praja Parishad, a Jammu-based political organisation that had launched in 1949 a historic four-year-long agitation against J&K prime minister Sheikh Mohammed Abdullah.

That had resounded with a rallying cry: ‘Ek Vidhaan, Ek Nishaan, Ek Pradhaan’. No less than 16 people lost their lives in a renewed phase of the stir that from November 1952. BJP stalwart Syama Prasad Mookerjee, who had come to Srinagar to support the agitation the next summer, died in a camp on June 23, 1953. A decade later, the Parishad that had fought for Jammu’s autonomy merged with the Bharatiya Jana Sangh, the precursor of the BJP (which was formed in 1980).

Three-and-a-half decades thence, in 2015, it’s that party which joined hands with the PDP that split from the Congress in 1999. Mufti’s had been a party that sought engagement in discussions of fresh political territoriality to J&K, often inviting views of it being soft-separatist. This, when the BJP had always looked for a muscular policy towards forces that had been seeking autonomy or independence in Kashmir.

Not surprising, thus, that it was a coming together of the north and south poles, as once said by Mufti Mohammed, a former Union minister who died as CM in early 2016, five days short of turning 80. After three months, his daughter Mehbooba Mufti took over as CM—on April 5. She, too, couldn’t cool down the PDP-BJP political friction that only gathered heat on the administrative levels too. Eventually, the alliance imploded this Tuesday—on June 19, a week before the death anniversary of the 1901-born Mookerjee.

The tug of war between the PDP and the BJP had started from the very start of their coming together in J&K. In fact, on March 3, 2015, two days after the government was formed, PM Modi disapproved CM Mufti Sayeed’s comment crediting Pakistan, the Hurriyat and even terrorists for smooth conduct of the pertinent assembly elections in J&K the previous year-end.

Into the second week of its rule, the PDP-BJP government withdrew a circular issued by the General Administration Department that wanted the state to be hoisted along with the national tricolour on buildings that housed constitutional institutions. As political observers said pressure from the RSS led to the nullification of the March 12 directive, former CM Omar Abdullah of the Opposition National Conference flayed the development. The state flag continues to be hoisted, but issuing circular and later withdrawing it was a symptom of disharmony between the ruling partners.

None of these early-days stories were recollected this week when BJP general secretary Ram Madhav announced his party’s withdrawal of support to the PDP. Instead, at the June 19 media conference, he cited Srinagar’s “discrimination” against Jammu and Ladakh as one thing that displeased the BJP. Discrimination against Jammu is, actually, an old BJP slogan—only that it had lost sheen and substance of late when the region started getting equal political partnership in governance, ironically with the emergence of a party like the PDP. As the saffron party was its partner, Kashmir polity got divided and had to depend on mandate from Jammu—where the PDP (like the NC) has very little base—to form the government.

The public perception of the BJP being hard on terrorists, separatists and foreigners was taking a beating in Jammu, as Union home minister Rajnath Singh was  seen more than ‘accommodating’ to CM Mehbooba. That was, first, by making his ministry agree to withdraw cases against stone-pelters (of the 2016 agitation following security forces killing militant Burhan Wani that summer). The second was making announcement for a ‘unilateral’ ceasefire during the Muslim holy month of Ramzan. It was different this time given that negotiations were on with Pakistan, terrorists and separatists.

Together, they were seen as pieces to knitting a story that looked like Jammu succumbing before Mehbooba, who also didn’t agree to a section’s demand for a CBI inquiry into case on the rape and murder of an eight-year-old Kathua girl this year. The case did hit the BJP as the CM flatly refused to accede any such demand; what’s more led to two ministers get the sack for attending a public meeting organised by Hindus who had migrated from Rassana alleging harassment by the investigation agency.

Overall, a perception was generated in Jammu that Hindus were being ‘persecuted’ under a J&K government also led by the BJP, which had tasted power for first time in the state. J&K being a Hindu-minority state, Modi and BJP national president Amit Shah didn’t want the party’s vital constituency to see the party as unhelpful to them.

This weekend, on June 23, the BJP’s Shah is coming to Jammu attend to a function to mark the death anniversary of Mookerjee. He will address a meeting from the very place from where the Praja Parishad started its agitation against Kashmir hegemony and for “full integration” of J&K with India.

With the BJP having pulled out of its coalition with the PDP and the government having fallen, this event has now more political connotations it did have till the other day.