The police have been 'force-feeding' a young Manipur girl in custody since November 2000 who refuses to eat voluntarily, demanding withdrawal of Armed Forces (Special Powers) Act, 1958, while recent charges of 'custodial-killing' hog the headlines in 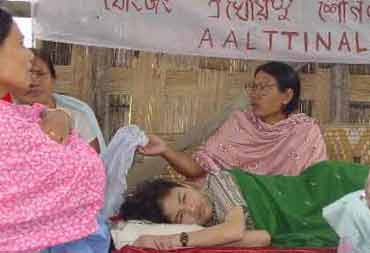 Nine hundred ninety three, and still counting. That's the number of days that a young Manipur girl has refrained from taking food voluntarily to demand the withdrawal of an Act that gives unbridled powers to the security forces to shoot and kill in this insurgency-hit state.

Since November 5, 2000, Irom Sharmila, a budding poet and a passionate human rights activist, has been on a "fast-unto-death" to protest against the Armed Forces (Special Powers) Act, 1958. and has had to be "force fed" by the state government to stay alive. This Act, which is in force in Nagaland, Manipur and parts of Assam, gives untrammeled powers to the Army and other security forces. Under the provisions of the Act, the security forces can search a premise, detain a person without warrant and shoot to kill without any warning.

The Act has been in force in Manipur since September 9, 1979 when the government first imposed it to curb militancy in the Imphal valley but later extended it to the entire state. Sharmila, barely in her mid-twenties, was shocked into launching her fast-unto-death after Assam Rifles troops killed 10 innocent villagers on the outskirts of Imphal on November 2, 2000.

Sharmila began her fast on November 5. The state government moved in and took her to hospital two days later and since she refused to break her fast, and refused bail she was arrested on grounds of attempted suicide and sent to Sajiwa Jail where she has been ever since and continues to abstain from eating. Every now and then, as her condition deteriorates, the police take her to Imphal's Jawaharlal Nehru hospital to feed her through the nose and bring her back to jail.

Her condition has deteriorated and her vital organs affected. Some time back, allegedly because of rude remarks passed by some nurses, she has refused even the nose feeding. Nobody is allowed to meet her.

Manipur Chief minister Okram Ibobi Singh recently informed the State Assembly that the government has already spent Rs 2.35 lakh to keep Sharmila alive. Her fight against human rights violation and excesses by security forces has drawn the attention of international human rights groups and other organisations, which have appealed to the union and state governments to address the issues raised by the girl.

Ibobi Singh, in turn, says: "I met her several times and requested her to end the fast. I also informed Prime Minister Atal Behari Vajpayee and deputy Prime Minister L.K. Advani that my government was willing to lift the Act from the state. However, due to lack of any positive response from the centre, we could not fulfill her demand".  He adds that if the act is scrapped from Manipur, the central government might pull out all central forces for deployment from the state. "If the central forces are withdrawn it will become very difficult for the state to combat the militant outfits," goes his arguement.

Meanwhile, in another development, human rights activists in Manipur are up in arms over the continuous incidents of custodial killings in the state by security forces. In the latest incident, two underground activists of banned militant organizations were killed under suspicious circumstances, forcing human rights activists in Manipur to blast the ruling government for not protecting the rights of the people.

The convener of the Committee on Human Rights (COHR) Manipur, Dr L. Pardeshi, talking to this reporter in Imphal alleged that the proscribed Revolutionary People's Front's publicity chief Sanjib, whose body was fished out from Nambul river on July 8, was killed while in custody of the Manipur police commandos. His allegations are based on the basis of testimonies provided by two individuals who were arrested along with the underground leader. COHR has also approached Amnesty International, London to help protect the lives of witnesses.

Pardeshi claims that the publicity chief N Mangoljao alias Sanjib (39) of Leimaram Khunou Tairenpokpi in Imphal (West) was arrested along with Asem Inaoba (42) of Yaiskul and Oinam Dilipkumar (44) of Khoyathong from Lamphelpat area in Imphal West district on July 6. Recounting the incident, Inaoba and Dilipkumar told this reporter that they were travelling in a Maruti car that night when Sanjib asked them for a lift upto the ICAR office. When they drove towards the spot, they saw some police commandos near the ICAR complex. On Sanjib's request, they made a U-turn but were however over-powered by the commandoes after a hot chase.

The commandos then separated Sanjib from the group, the witnesses claim, and put him inside a police vehicle. All the three were blindfolded. After moving for sometime, they heard some gunshots, and later, they say, they  heard the police commandos shouting that Sanjib had run away. Since their eyes were blindfolded, they say, they could not see what was really happening and add that they even thought that Sanjib might have escaped. They were later taken to the Manipur police commandos barrack in Imphal for the night.

The two individuals were later released after signing the PR bond on the following day. However, after they learnt that the body of Sanjib had been fished out from the Nambul River on July 8, they left the state, as they say they were apprehensive that the police might eliminate them to destroy evidence. After contacting COHR, both of them arrived in Imphal on July 12 and spoke with the local media.

Dr. Pardeshi claims such custodial killings are common in Manipur. "This is the first time, however, that two witnesses have come forward to give testimony," he claims. The police, on the other hand, maintain Sanjib was killed when he tried to escape from their custody.

Irom Sharmila, meanwhile, is still in jail, resolutely on her fast, refusing to eat voluntarily, refusing to "co-operate". It would be a big embarrassment for her to be allowed to stay on her fast-unto-death. So the police would perhaps soon take her to the Jawaharlal Nehru hospital again, force-feed her through the nose, and release her after a few days. Nine hundred ninety four...