9 Colours Of Navratri And The Supercars That Wear Them

Each colour worn on each of the nine days of the festival signifies a meaning, and our enthusiast brain takes us straight to a supercar which owns it

Navaratri, the nine-day long festival, marks the onset of the festive season in India and engulfs the entire nation with a sense of joy. And, in the automotive world, what better joy than tarmac tearing, rubber burning exotic supercars. As each day of the festival is celebrated with a different colour, we talk about supercars which wear these colours best. 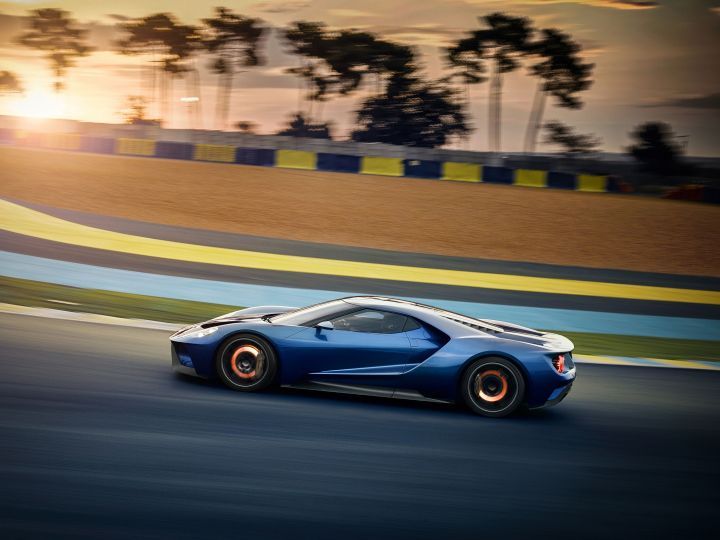 Signifying calmness, wisdom and strength, the colour Royal Blue is worn on the first day of Navaratri while worshipping goddess Brahmacharini. And, for us petrolheads, what better to represent blue than the Ford Blue on the 2017 Ford GT. The reincarnation of a beloved icon, the second generation GT looks like a car straight out of a Sci-Fi movie. With sharp cuts on the bodywork, a sleek and low-slung stance and an active rear wing whose movement is art in itself, the GT is one of the best-looking supercars in the market today. It doesn’t just end with the looks - you will find Ford’s most powerful EcoBoost engine ever under its hood. This 3.5-litre V6 engine produces 647PS of power and is paired with a seven-speed dual-clutch gearbox. Top speed of the GT is limited to 348kmph.

Another party trick of the GT is the hydraulic suspension. It changes ride height with different drive modes. The suspension lowers the GT by 50mm in Track mode. This mode also raises the rear wing and closes the front splitter ducts for better downforce. And all of this happens in one swift movement which is mesmerising to watch. 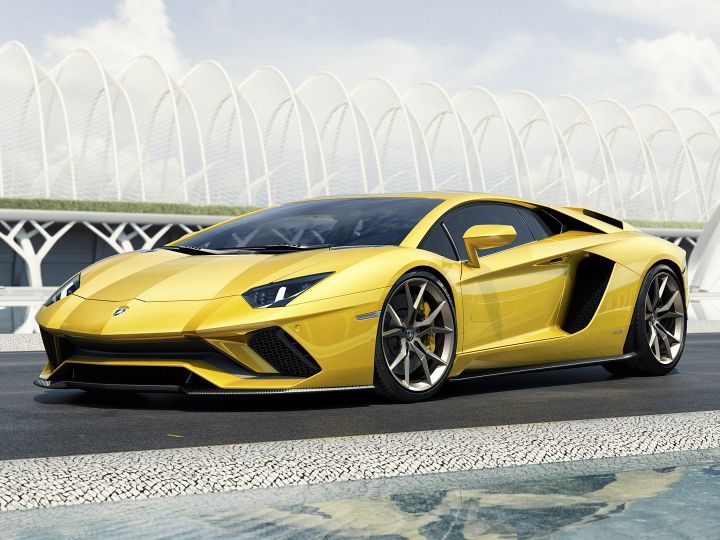 Yellow, the colour of day 2 is worn on the day of the Chandraghanta Puja and stands for happiness and optimism. Best representing the yellow is the mighty Lamborghini Aventador S. This Italian raging bull packs in what could be the last of the world’s naturally aspirated V12s producing a massive 740PS, helping it rocket to the 100kmph mark in just 2.9 seconds. If you keep the pedal pressed, the supercar will touch a top speed of 350kmph as well.

But because it is a Lamborghini, a big angry engine is a given. What makes this one particularly interesting is the fact that it was the first from Lambo's stable with the ability to steer its rear wheels! How this works is at low speeds, rear wheels steer in the opposite direction of the car's steering wheel, thereby virtually reducing the wheelbase helping it turn in sharply. At higher speeds, both front and rear wheels steer in the same direction, thus virtually extending the wheelbase, increasing stability and responsiveness of the car.

Those looks, that engine and such wizardry make the Aventador S one mad supercar. 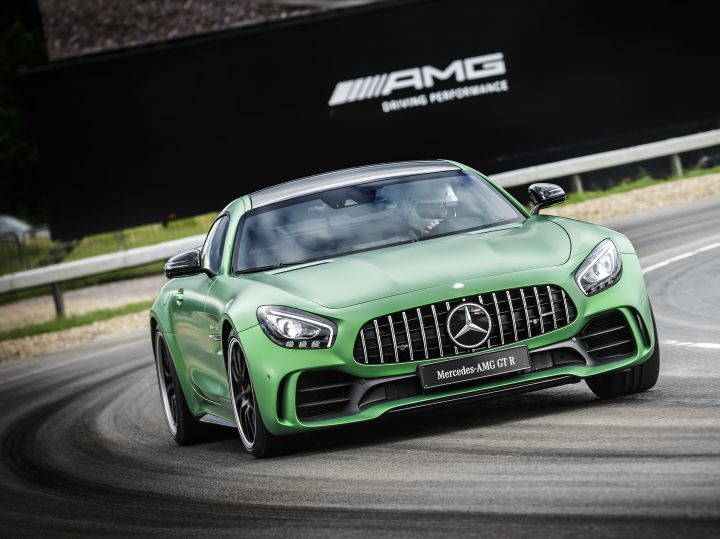 Day three is dedicated to worshipping goddess Kushmunda. The colour of the day is green which signifies a new beginning. And the supercar to represent green has to be the Mercedes-AMG GT R. Packing in a twin-turbocharged 4.0-litre V8 from the GT S, the GT R produces a massive 585PS of power and 700Nm of torque. Working in sync with an AMG 7-speed dual-clutch transmission, the R takes just 3.6 seconds to reach 100kmph and has a top speed of 318kmph. Launched in India back in August 2017, it broke the lap record for the fastest production car on the BIC, besting the SLS AMG with a time of 2:09.853. The AMG GT R also clocked the fastest lap time of 7:10.92, for any front-engined rear-wheel drive car around the Nurburgring in 2016, which since then has been broken multiple times. 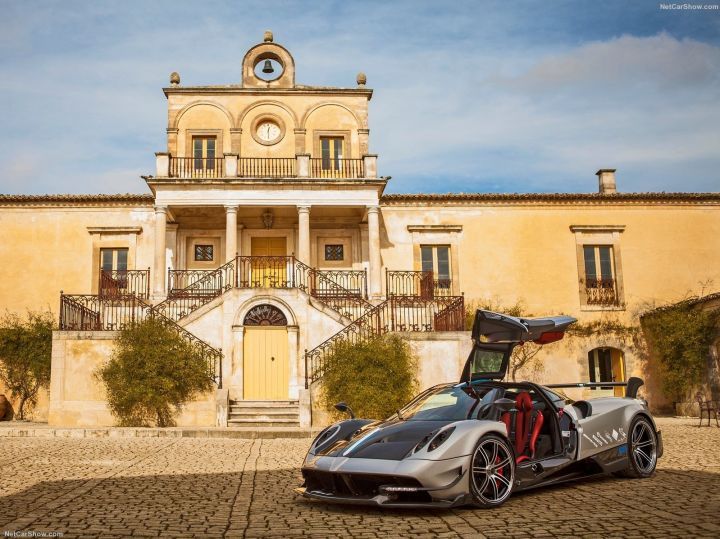 The fourth day of Navaratri is dedicated to the bond between a mother and her child and is celebrated by worshipping the goddess Skandamata while wearing grey. To an enthusiast, the colour grey more often than not signifies carbon fibre. And no car wears it better than the Pagani Huayra BC. This hardcore version of the Huayra is dedicated to Benny Caiola, a well-known car collector and Pagani’s first customer who passed away in April 2010. Powered by the same V12 AMG engine that does duty on the regular model, the BC is tuned for a higher power output of 800PS and torque output of 1010Nm. Not just that, the Huayra BC is also lighter by 132kg than the standard version, courtesy of the new AP forged alloys, a titanium exhaust, new carbon fibre mix and tweaks to the suspension. There’s also a new seven-speed automated manual gearbox from Xtrac, which is not only 40 per cent lighter but manages changes twice as quickly. As a result, the car reaches 100kmph in a sub-3.0 second time. 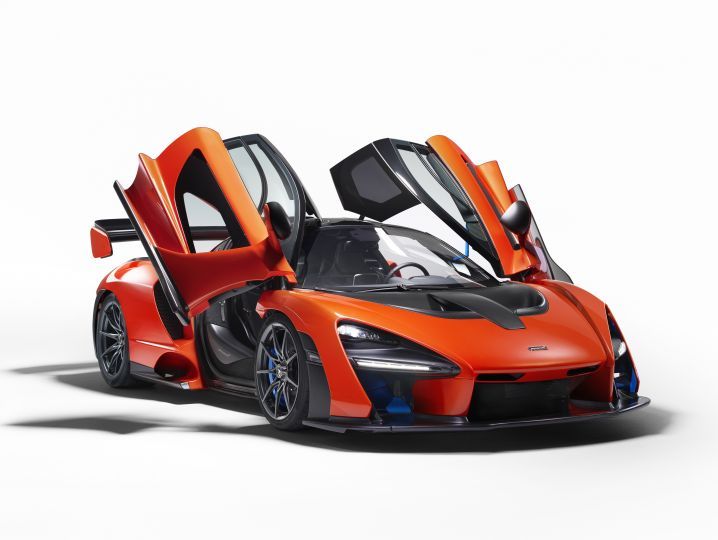 On day five, devotees worship goddess Saraswati while wearing orange, representing knowledge and energy. Those two words are best represented by none other than the Mclaren Senna, the most powerful road car from McLaren yet. Paying homage to the legendary Formula 1 driver, Ayrton Senna, the Senna is the most expensive road-legal car from McLaren’s stable. Developed for driving enthusiasts and purists at that, the mid-engined, rear-wheel drive car can generate up to 800kg of downforce with its massive rear wing. Powering the Senna is a 4.0-litre twin-turbo V8 producing a staggering 800PS and 800Nm. The 0-100kmph sprint takes just 2.8 seconds, while the next 100kmph comes up in 4 seconds and the next one in 12 seconds. Only 500 units of this car have been made with each costing approximately Rs 7.3 crore in the international market. 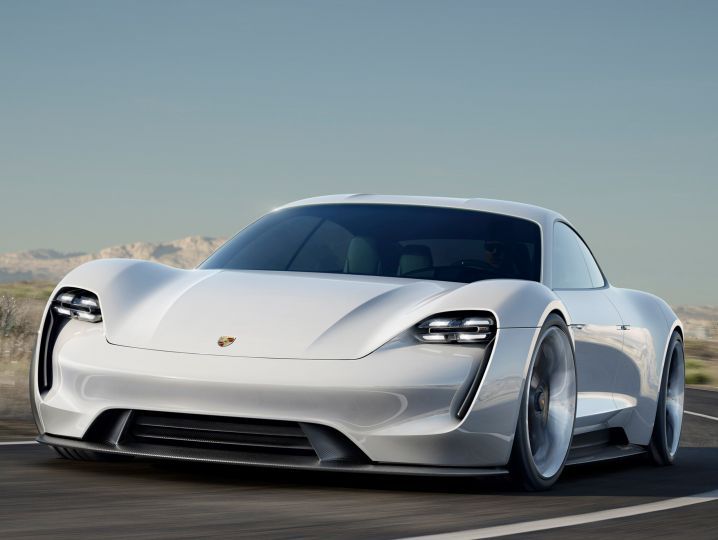 Dedicated to Goddess Katyayani, people wear white on the sixth day of Navratri to symbolise peace and purity. And with the world transitioning to electric mobility, there are few supercars that symbolise purity better than the purely-electric Porsche supercar - the Taycan. Formerly known as the Mission-E Concept, Porsche's first all-electric car, the Taycan will pack at least 600 horses courtesy two electric motors. 0-100kmph is expected to take less than 3.5 seconds and the car will hit 200kmph in under 12 seconds. All this, with a maximum range of over 500km, of which 100km can be covered with just 4 minutes of charging. Impressive? You bet! 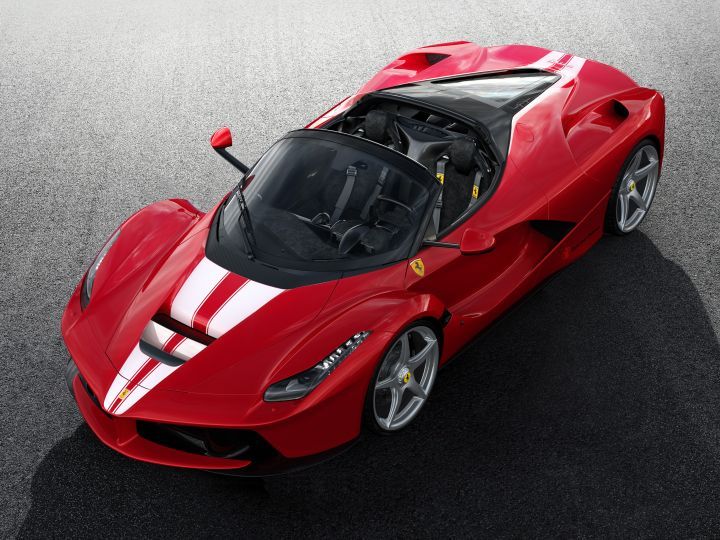 Wearing red to symbolise fire and energy, devotees worship goddess Kalaratri on the seventh day of Navratri. Red, fire and energy in one sentence? No points for guessing, it had to be the Ferrari LaFerrari Aperta. And not just any LaFerrari Aperta, the one and only of its kind, painted in red with white graphics. This limited-edition special series model was launched to commemorate the 70th anniversary of the company and was auctioned to help the charity ‘Save the Children’. The LaFerrari Aperta’s powertrain is a hybrid one. It comprises of an 800PS, 6.2-litre, V12 along with a 163PS electric motor. The total output is a massive 963PS and 900Nm. Coupled with the F1 DCT, the car reaches 100kmph in under 3 seconds, while 0-200kmph takes 7.1 seconds. Keep the pedal pinned and the supercar will reach a limited top speed of 350kmph. 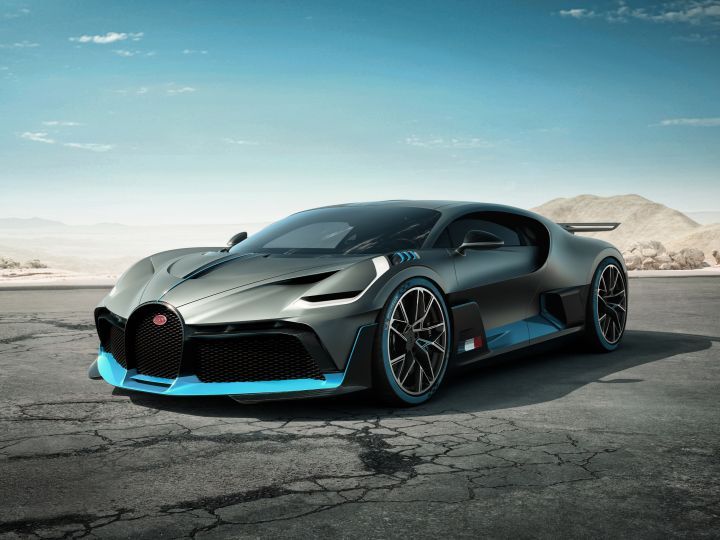 Devotees wear the colour blue on the day of Ashtami to symbolise their appreciation of nature. And while the Bugatti isn't conventionally blue, the highlights definitely are a vital part of the design in both form and function. Dedicated to Bugatti’s legendary racer Albert Divo, the Divo packs the Chiron’s 8.0-litre W16 engine with 4 turbos. The power output is rated at an incredible 1500PS! This, along with the sophisticated all-wheel drive and the aerodynamics lets the car dart to 100 kmph in 2.5 seconds, which is the same as the Chiron. But, the top speed has been lowered from 420kmph (Chiron) to 380kmph for the Divo, as its focus is not on outright speed. You see, the Divo favours corner speed and handling than straight-line drags. Bugatti has even picked up the now overused saying “Happiness isn’t around the corner, it IS the corner”. This supercar is limited to just 40 examples, all of which cost over Rs 40 crore, and are already sold. 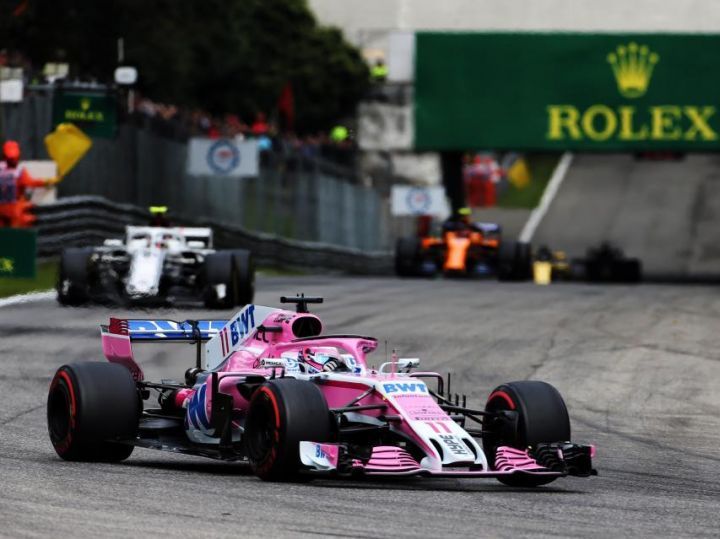 The final day of the festival, Maha Navami is celebrated with devotees dressed in the shade of pink, representing hope. And while almost no manufacturer has showcased a pink supercar, there is one quite close to our hearts - the VJM11. The car from India’s very own F1 team, Force India - the VJM11. It has been doing quite well for the team in the 2018 championship which is currently ranked 7 out of 10 with 43 points. The car runs a Mercedes-sourced 1.6-litre V6 powertrain underneath and is being driven by Esteban Ocon and Sergio Perez in the current season.

Hope you enjoyed reading this article. If any of the 9 colours remind you of any other car, do let us know in the comments below!