to the forest entry gates with the early birds, others rushing the other way to pick up their passengers from hotels. Add to that trucks and smaller vehicles speeding along the highway. We waited by the roadside, our eyes scanning the sky above the distant tree canopy on our left and the small tree in front of us. A girl, riding a cycle, rushed out a house and our guide-cum-driver Prafulla Deora waved her back. It was past 6 in the morning and we had about 20km to cover before reaching our destination of the day, Agaratoli forest gate, the eastern gate of the Kaziranga National Park. We did not know what exactly Prafulla was trying to show us. All he’d say was that it was a secret. We were getting impatient, fearing we would be late in entering the forest but Prafulla was determined to wait.

“Look!” he said suddenly. We looked up and saw a pair of oriental pied hornbills flying in. The female alighted on a branch of the small tree in front of us—she had already chosen a hollow in the trunk for her nest—and the male perched on another tree. Now began their courtship ritual, or “the trial”, as Prafulla called it. The female watched the male search for fruits. He swallowed the fruits and approached the female. As she opened her beak, he fed her the regurgitated food. This went on for a while. At one point the female rejected the food so violently that we could not but help but laugh, even though Prafulla had strictly said that we were not to make any noise. In between the feeding, the female inspected her nest. When it is time to lay eggs, the female will enter the hollow and seal it with mud and saliva. Only a small opening would be left for the male to feed the female while she raised the chicks till they were ready to fledge. The courtship continued despite our presence (we were standing a reasonable distance away) and the busy highway. It was a pleasant experience and we were happy that we’d waited. After the photographers in our group had got their perfect shots, we moved on.

But this was not the only time that we stopped on NH 37 that connects Guwahati with Jorhat. We had driven to Kaziranga from Guwahati, a journey that took us around five hours, with a halt for breakfast and a glimpse of a colony of greater adjutant storks at the dumping ground near Guwahati city. While headed for the east gate, we saw rhinos and elephants in the distance. It is not unusual to see tourists stop along the highway to see the animals roaming among the grasslands adjacent to the road. On another day, on our way to Burapahar, we’d seen families of capped langurs frolicking among the tree canopies overhead.

Located in the floodplains of the Brahmaputra river, which runs along the northern end of the park, Kaziranga National Park of Assam is a Unesco World Heritage Site. It had been declared a Reserve Forest in 1908. It’s status was upgraded to that of a National Park in 1974 and it became a WHS in 1985. To the south of the park lies the verdant Karbi Anglong hills. The park has five ranges—the Eastern Range at Agaratoli, the Central Range at Kohora, the Western Range at Bagori, about 12 km further west of Kohora, the Burapahar Range at Ghorakati, about 25 km west of Bagori on the NH 37 and the Northern Range at Biswanath. Although the park headquarters is at Bokakhat, the tourist facilities are mostly concentrated around Kohora.

We shunned the elephant rides and opted for the Gypsy safaris. It was end-March and quite the park was quite crowded. We had to queue up really early during both morning and afternoon safaris to stay ahead of the pack. It was rather dusty and trailing other vehicles was not a pleasant experience. Into our third safari, we had already seen the famous four of Kaziranga—the Indian one-horned rhino, the Asiatic elephant, wild buffalo and the swamp deer. The rhinos were particularly obliging. We would see the lumbering beasts standing or feeding in the grasslands. During one drive, we waited while a mother and cub crossed the road. Thinking they had moved inside the forest, we moved ahead. We did not know there was a ditch below the level of the road and the mother was trying to guide the cub across the mud bank. As we moved ahead, the mother grunted and mock charged. Realising our mistake, we backed off and waited until we saw the pair moving away in the distance.

Kaziranga is an Important Bird Area (IBA) of India with 480 species of birds, of which 25 are globally threatened species. We had seen quite a few of them as well. We’d also seen the tokay gecko, the Assam roofed turtle as well as a water monitor. But the glimpse of a tiger had eluded us. To make matters worse, we’d met people at the end of the rides and heard about their tiger sightings and had felt a wee bit jealous. We consoled ourselves with the thought that it is the way of the forest.

On one particular busy afternoon at the Bagori range, we were tired of trailing other cars and had decided to concentrate on one particular water-body, where we saw several birds, deer and a pair of wild boar. Suddenly, we spotted a cute baby elephant pushing its head out from a grassy thicket nearby. It was followed by an adult, probably its mother. Soon we realised that a whole herd was coming to the lake. We spent well over an hour watching the herd—the cubs gambolling in the water while the adults leisurely sprayed themselves. Other vehicles queued up and waited when everyone realised the herd was getting ready to cross the tar road. First, an elderly matriarch came out of the grass-bank and ambled across. Thereafter, nearly the entire herd crossed the road in a rush, the adults guiding the cubs, one of which seemed only about a month old, with their trunks. We thought the show was over, when two more adults walked across. It was nearly time to leave the forest.

Then, suddenly, a roar!

We scanned the forest, trying to get the direction right by listening to the alarm call of langurs and deer. A few more roars followed. We rushed to a smaller water-body hoping that the tiger might come down for a drink but only found scores of deer. Disappointed, we moved ahead. But the roar was too close to ignore. So we retraced our steps and scanned the lake bank once again. One of our group members looked through his binoculars and exclaimed, “…and isn’t that a tiger!” Yes, he was right. The tiger (or may be a tigress) was sitting at the edge of the tree-line, staring hard at the flock of deer by the waterside. It was a joyous moment for us. A couple of more gypsies arrived and we high-fived. We waited until it was too dark to see. Also we could not delay the return any more or the driver would be penalised at the check gate of staying beyond the stipulated time.

That was our last ride in Kaziranga. We were in a hurry as we would be returning to Guwahati to catch our flights home. But a huge herd of spotted deer chose that moment to cross the tar road. We could not gauge their numbers, countless was our estimate. But animals have the right of way. And we waited patiently until the herd had crossed. And then drove like the wind to Guwahati.

There are daily flights to Guwahati from all the main cities. Kohora, the tourist hub of Kaziranga, is 220km by road from Guwahati. 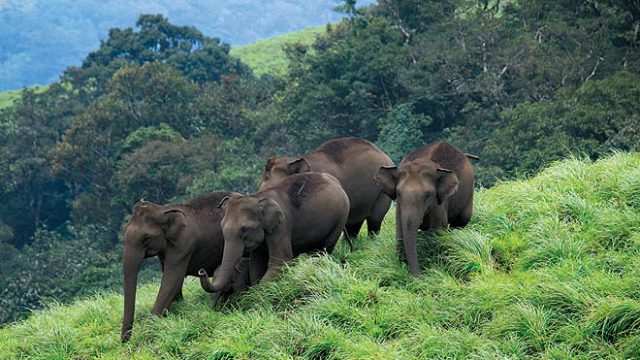 The Best of Kerala

Enjoy a laid-back boat ride through the dreamy backwaters or go trekking in the picturesque forests of Periyar tiger reserve, here’s a list of Kerala’s best tourist offerings