Home  »  Website  »  Sports  » Profiles  »  Yet Another Record, Yet Another Eulogy
profile

Ten-thousand-dulkar runs 28th Century in ODIs, India go up 2-1, what more can one ask for? 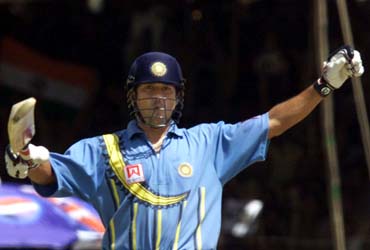 "He is someone sent from up there to play cricket and go back." -- Ravi Shastri.

"Woh to heera hai, bhagwan ne usko tarash kar banaya hai." (He is a diamond and God has taken special efforts in creating him) -- Chetan Chauhan.

Words describing a gifted sportsman? Not quite. Sachin Ramesh Tendulkar has ceased to be a mere sportsman.

Much too much has been written about him and more than that, the man himself is busy writing record books anew, sending us poor hacks scurrying around for appropriate adjectives to put in a "yet another eloquent eulogy" that our editors seem to demand with exasperating regularity. Not that one minds writing about his exploits - writing on Sachin scoring 10,000 runs is certainly far more pleasurable than, say, on Rs. 10,000 paid to one Raju Venkatesh at Bangaru's house. All right, all right, granted the analogy isn't very apt, but isn't there something inevitable -- and almost banal -- about both? (Now if one were to write about the first time such an amount was paid, it'd be a different ballgame all together, I guess.)

(Very fitting too, by the way, that Sachin became the first player to reach 10,000 runs in one-dayers - after all, it was his "guide and philosopher", the other little master, Sunil Gavaskar, who was the first to notch up 10,000 runs in Tests.)

But it is not only the hacks who are kept busy by the current little master. The ever-polite, serious and sombre young man has been a problem for the men sending down the red cherry from the very beginning. From the days when he was "shorter than the stumps, when he had his own method of communication with weaker peers and that was bashing them up for no reason". One whom elders would point to and ask their wards to be exactly the opposite of. A picture of the perfect brat, the guy  never thought that as the son of a renowned Marathi scholar his priorities should be different. But who would think of him as a brat now?

To recount a tale told many a time before, it was elder brother Ajit -- whom Sachin emulated by taking to the game -- who acted as a catalyst in channelising the younger sibling's energies. The result? A meeting with cricketing guru Ramakant Achrekar and a shift to Shardashram Vidya Mandir -- a place where education never interfered with cricket. "I used to bat in four nets at one stretch. Whenever, I use to get tired, Achrekar sir used to keep a one rupee coin on top of the stumps and say, 'anyone who gets him out will take this coin. If no one gets him, Sachin takes it'."  He still attributes those one rupee coins for being the secret of his concentration.

It was under Achrekar that Sachin's fascination for power and speed took shape and he embarked on a journey as a bowler's nightmare. But the master blaster doesn't " like this word dominate".  "I don't ever go in with thoughts of dominating a bowling attack. I just go out and play positive. My game is to play my shots. If I don't do that, I won't score any runs. I'd rather say I try to play positive."

The famous 329 in a school final when he shared an unbroken stand of 664 with close friend Vinod Kambli, centuries on debut in Ranji, Duleep and Irani Trophies, a gritty 59 as a 16-year-old against a venomous Pakistani attack, becoming the second youngest player at 17 to score a Test century , the youngest to get a century in Tests in Australia and becoming the first overseas player at 19 to represent Yorkshire in 130 years, etc, etc have been invaluable experiences the receptive youngster has allowed to sink in and learn from, transforming himself into the leaner and meaner run-machine he is today.

So how complete is the curve? "Oh, not yet. The problem is that there is so much cricket and I find it hard to concentrate all the time. I am not working for hundreds as perhaps I should, but I am trying to keep my best energy for Test matches. I wish we played more Tests." As for setting records, he does not lose sleep over them. "I don't like goals in front of me..they affect your game if you start thinking about these. Better to just play normally and let things happen. If they have to happen, they will happen. You can't will them to happen. Ultimately it is a matter of destiny. There is still a long way to go. Let's see if my form and fitness remain."

This is the talk of the modern mega-sportsman --  also the talk of a thinker and a realist who understands the demands of the long and potentially treacherous road ahead. Let's spare a thought for Brian Lara.

Talking of Lara forces one to talk of flip sides. Sachin's back injury in 1999 threatened to ruin his career and speculation was immense. Newspapers and magazines carried detailed medical diagnosis and plainly asked whether his career was over. Far from it. But Sachin' 's two stints as captain (success rate of 32.8% in ODIs and 25.6% in Tests) have left room for a lot of criticism. He found the task of marshalling a disparate group difficult and on top of that, his batting took a beating. At the moment, Tendulkar has no problems playing under Sourav Ganguly. "When I gave up the captaincy, the situation demanded so. However, I have never said that I will not lead India again. I am pretty open to the idea of leading India if the situation comes to such a stage."

Apart from a sharp cricketing brain (the man remembers all the dismissals of his career and the bowlers who got him), he has also been a thorough professional in his approach. Long before cricket became the multi-crore industry it is today, he got together with Mark Mascarenhas and WorldTel and signed a landmark deal that guaranteed crores of income from endorsements. Amidst all the mudslinging in the match-fixing controversy he is perhaps the only cricketer whose integrity has never ever been questioned. Given his intensity and commitment towards the game, no bookie would dare approach him. While several TV advertisements featuring cricketers have been taken off the air after the match-fixing scandal, Sachin remains an eminently saleable commodity.

What can be a better testimonial to your status as a hero than to have an entire chapter in the plus-two English curriculum in Orissa?  Not to talk of  the video, made for Don Bradman's 90th birthday party -- which he was among the chosen few to be invited to and attended -- showing the uncanny resemblance of their batting styles. Or the Aussies voting Sachin as the best in the business after their last visit...

But the man remains unfazed.

There's this story. Apparently during a shoot for Pepsi, the ad-director wanted to depict Tendulkar dispatching and bludgeoning the bowlers all over with, well, a fly swatter. Sachin refused. "The ad would indicate that I am bigger than the game." And refused to shoot forcing the  director to changed the script. The modified version finally had Sachin hitting the ball with a stump along with the jingle that went "Ae Sachin aaya re bhaiyya."

For all his humility ("I can't ask for anything more. I always maintain that if you score runs, it should be useful and your team ends up winning,") Sachin's hunger to scale greater heights remains undiminished (and the guy certainly does keep a note of his stats - notice how he commented about his nearing 100 one day wickets? Now why didn't Sourav just give him the ball and allow him to take 100 wickets as well? At least would have saved us the bother of writing one more eulogy when that happens)

But, hey, is anybody complaining?